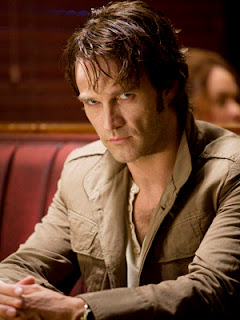 Where to start. First off, all the Risky Regencies with the exception of Elena Greene, are here in Washington, DC, at the Romance Writers of America’s National Conference. Which is cool! And we are having a get-together on Saturday afternoon at Harry’s Pub so come by if you are also around.

But that means that I am, as usual, at a loss as to what to talk about. So, of course, I will choose to talk about hot guys. And right now my hot guy du jour (non-Clive Owen edition) is Stephen Moyer, who plays Bill Compton on True Blood. Since Carolyn Jewel–my RWA roomie–was onto the True Blood trend way before me (but her One True Love is Alexander Skarsgard), she brought her Season One DVD so I could see the first time Bill and Sookie do it. Which is what we did last night, in-between eating Krispy Kreme donuts and howling about rhinoceroses. Hard to explain about the latter, but let me assure you it was hysterical.

But back to the matter at hand. Bill and Sookie’s first time is so damn romantic, and Bill manages to convey both his lust for and worship of Sookie in that scene. And the donut was pretty damn good, too.

The first kiss, the first time, the first moment in the fiction we love–whether it’s movies, TV or books–is what gives my heart a poignant ache. Also in True Blood, the first time Sookie even sees Bill is a scene I had to rewind and watch over and over. And all it is is a look, but what a look.

The first time Darcy and Elizabeth see each other, when John Thornton and Margaret Hale have their first encounter, when Mr. Rochester nearly tramples over Jane Eyre–these are the moments that inform our romance vernacular.

What first times do you find particularly memorable? What was your first time like?

You made me think about the first sex scene I ever wrote. I was nervous and a little embarrassed, maybe even a bit guilty (what would my mother think? I was raised Catholic), enjoyed it tremendously and never looked back. 🙂