I’m home from the RWA conference in Washington, DC, after having a lovely time. I am still so tired from the festivities that all I can do is produce random thoughts.

1. The time started out in a very exciting way! We Riskies (except Janet who was squiring folks around on a Washington DC historic house tour)
were interviewed at XM Radio (more on that in upcoming days!)

2. I danced with Janet (and the Harlequin Historical editors) at the Beau Monde Soiree. But just one dance. We would not wish to set tongues wagging. 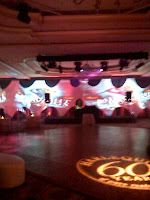 3. The Harlequin Party was held at the Ritz Carlton in a ballroom with a great dance floor and the same DJ as in San Francisco (He’s so good!). The theme was Harlquin’s 60 year anniversary, and they set up bars with a theme of the decade. For example, the 1960s bar served Singapore Slings. A video display of old covers was flashed on the wall and on monitors throughout the room. Needless to say, it was a wildly wonderful party.

4. Harlequin was a big presence at the conference and well they should be with the wonderful year they are having, sales-wise. They gave all conference attendees tote bags with a vintage Harlequin cover on them. Keep an eye out for more Vintage cover products, soon to be on sale in Barnes and Noble and Borders and such. Harlequin partnered with a stationary company to produce a bunch of very cool notebooks and things like that. To a few lucky early arrivers at the Harlequin party, I snatched a set of post cards with vintage covers on them. Here is an idea of the covers that will perhaps be featured.

5. The Mills & Boon editors (including Harlquin Historicals) are the BEST!! Not only did Joanne Grant (Historical) and Kim Young (Romance) attend (and dance in spike heels) at the Soiree, they also “made an offer” to aspiring writer and Golden Heart finalist (and later the winner) Jeannie Lin to buy her manuscript Butterfly Swords. Joanne and Kim gave a great workshop on avoiding cliches, a download of which should be available to purchase. (check the RWA site for more on that). I could go on and on about how much fun these two ladies are, but the other editors were equally as friendly. Sheila Hodgson (Medicals) greeted me like an old friend at our Mills & Boon Reception and editorial directo, Karin Stoecker, met me for a friendly drink. (Joanne, Karin, and Sheila also toasted me with champagne in 2006 after my RITA win). Tessa Shapcot (Presents) sat across from me at the Harlequin Historical lunch and was a delight to chat with.

6. Our Riskies get-together did not go as planned. Harry’s Pub was not conducive to such a gathering, but we made do in the Lobby bar and I had a great time chatting with Santa and Keira. Andrea Pickens and Miranda Neville, both past guest authors, also were there. Santa and I even did an impromptu plot-storming session. (Miranda Neville, by the way, helped me solve a sticky plot problem, as well, when we were just chatting at breakfast Sunday). Another Risky interviewee, Pam Rosenthal, won the RITA for BEST HISTORICAL Romance!!!

7. My very favorite part of the conference is running into old friends and making new ones. I love the mystery of why I sometimes see certain people everywhere (either Sandy Coleman and Amy of All About Romance were stalking me or I was stalking them, not sure which, but everywhere I went, they did too.) and others hardly at all. And I also love walking through the halls and greeting old friends.

8. I had great intentions of touring around DC with Keira and Amanda on Sunday, but I was so exhausted that I went home early and barely budged from my spot on the couch. So sorry, Keira and Amanda! I hope you had a good day.

How about you? If you attended the conference, what were your most memorable moments? If you didn’t attend, what else can we tell you about it?

Oh, I also met with Emily Cotler of Waxcreative Design so look for some new stuff at my website real soon. There is a new contest there right now.

That sounds like so much fun and I love the idea of a Harlequin romance tote bag. At the University of Pittsburgh bookstore they once had old novels turned into purses. I didn’t have the money that day to buy one, but when I went back they were gone. Oh well. Thanks for sharing.

Diane, I’m so glad I got to meet you at one of your book signings in DC. You very graciously invited me to join your group at the pub, but I was unable to make it. Thanks again for your offer.

After your wonderful description of the fun you had at the soiree, I’m even more unhappy that I was unable to attend. I did, however, tour the Manor Houses with Janet. She and the other Beau Monde ladies put together an awesome day!

Here’s wishing everyone a restful week!

What a fab time it all sounds, Diane! I can live vicariously through your RWA memories this year… 😉

Diane, so glad you had a great time. You have me pining for next year (I hope)!

The tour of Federalist homes was indeed wonderful. Such a lovely day of touring, good food and discussion. Thanks, Janet. I had a wonderful time.

Seeing the Riskies at the Soiree and throughout the conference was a real treat. And, of course, seeing you, Diane! It is always a highlight of my conference to spend time with you. Oh! And I got to meet the lovely Nicola Cornick and her husband. Their dog, Monty, is a dear friend to me as well.

The highlight had to be meeting my fantastic agent for the first time. I definitely made the right choice.

Jane Austen, the totebags were coveted by those people not attending the conference. I’ll try to remember to take a photo for next week.

Kathy, it is a truth about conference that you can never do all that you want to do. So glad you introduced yourself, though.

Cara, I missed you! Nobody played cards at the Soiree!

Elena, I missed you, too! I hope you can make it next year, for lots of reasons but also because it will mean your husband is doing well enough for you to attend.

Louisa, It was great to see you. Louisa won the Daphne, too!!

Ooh, congrats on the Daphne, Louisa!

Diane, did they have cards and card rules at the soiree, at least? (Just curious.)

It was great to see you guys at conference, although the Beau Monde wasn’t the same without Cara and Elena–I met you both for the first time at BM events!

I was so sorry to miss the Risky gathering, but our workshop went well and was well attended–what a relief!

Louisa, I barely saw you this year, but Many Congrats on your Royal Ascot and your Daphne!

I had a great time and am now playing catch up…

Deb, we missed you at our gathering, but I’m glad the workshop went well. I would have enjoyed attending it.

Elena, I know they intended to have cards and YOUR instructions there, but I didn’t see any.

Cara, we did have cards and instructions, which was lovely, and the gold coins made their (final, I hope) appearance, after traveling from San Francisco to my freezer. Naturally I had to test them.

We had a terrific dancer and caller who managed to herd we cats into a semblance of dancing. An excellent evening!

It sounds like it was a wonderful event! Thanks for including those of us who couldn’t go this year. 🙂

Diane, hope you’re feeling better now that you’re back home and in the swing of your writing. So glad Miranda helped solve your sticky problem.

And thank you for taking me as your date (now, we wouldn’t want to set the tongues wagging) to the Harlequin party. Sounds so much better than saying, “I crashed the party.”

Congratulations to Louisa on her Ascot and Daphne wins. She probably is the only Beau Monder with three consecutive wins. A hat trick!

Louisa: “Sell already, for heavens sake, and leave the floor to the laboring folk.” Ahem!

Cara & Elena, you were much, much missed.

Janet, the man calling the dances and the band was very good.

Judy, I hope you get to attend one of these years!

Keira, I felt rotten for standing you all up on the touring day, but I was so exhausted. I spent the day parked on the couch and did NOTHING. I’m so glad you agreed to be my “date” for the Harlequin Party. We had FUN!!

Diane, I’m so glad you’re doing much better now. I had a LOT of fun at the HQN party. Thank you once again.