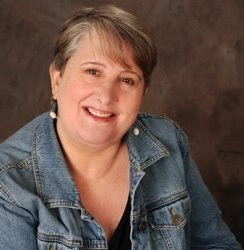 Today Janet cedes her usual place in the Thursday spotlight to Megan, who interviews . . . Janet!

Janet’s latest book, A Most Lamentable Comedy, is out in the UK now, and Janet answers some questions all about it.

Tell us about this book; what was its inspiration?
It’s a sequel (sort-of) to The Rules of Gentility (2007), and and an attempt to prove to my editor at HarperCollins that Rules wasn’t a one-off book. Although she didn’t bite, Little Black Dress (UK), who’d bought and published their own edition of Rules, offered me a three-book contract. This is the first of the three. I chose Caroline as heroine because I wanted to write about a bad girl. Philomena, the heroine of Rules, was quite well-behaved, as was Inigo, more or less. Caroline isn’t and I had to create an equally disreputable hero to match her. I based the premise of the book on a couple of minor characters from Dickens’ Our Mutual Friend, con artists who find out after they marry that neither has any money, which I found quite fascinating.

It’s told in first person present tense—how did you decide to write it that way (since it is an unusual style)?
Rules was written that way, my UK editor loved it, and I find I have a lot of fun with it. Essentially it is all about my entertainment. 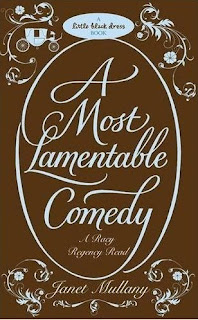 What would be your response if people say they can’t sympathize with your heroine, who is on the run from creditors and has not always led a pristine life?
Read another book?! She gets more likeable as the book goes on; she is a fiercely proud, loyal woman and you see that side of her emerge, although she remains a troublemaker who can’t resist opportunities to behave badly.

Do you plan to write more on any of these characters?
Not at the moment. They may turn up elsewhere, but they haven’t so far!

You’re a “risky” writer in terms of sex, yet this book has hardly any actual sex in it; what made you write it that way (although it does have plenty of sexual overtones)?
For this style it’s all in the subtext, and so there’s very little explicit language, which makes sense given who the characters are. Also during sexual encounters most of us are not taking notes or having a blow by blow (if you’ll pardon the expression) narrative in our heads.

What kind of research did you do for the book?
Embarrassingly little. I researched card games, bears, and sheep online, and wrote to the Folger Shakespeare Library about prompt books. As usual I dredged up items from the large trivia collection in my mind.

What is the biggest risk you’ve taken here?
I think having characters who don’t reform. Nick and Caroline remain essentially who they are, but what redeems them is that they open themselves up to friendship and community and responsibility. I may also have offended every writer who’s written about Dukes and courtesans, and every reader who likes that particular trope.

What’s up with the animals that pop up in your books: The pig who eats buttons, the dancing bear, etc.?
Oh, I like animals. The pig is based on a bit of family lore and there’s a photograph to prove it (which my brother, ahem, is supposed to be finding and scanning so I can put it on my website). When my brother was two he had a traumatic experience in a Dutch petting zoo with a pig that ate a button off his coat. As for the bear, Elena Greene blogged at the Riskies last year about dancing bears and I found them very appealing. I needed a way for the hero to meet up again with another character who’d disappeared, and I thought of a circus. As one does.

Do you think this book has an HEA?
Definitely. I can’t write the long, drawn-out apologies, explanations, declarations and six babies later type endings. To me it’s always an act of faith, the leap into the unknown territory of marriage.

What is your writing process? Are you a plotter or a pantser?
I’m a pantser by nature which is a bit of a problem for selling on proposal. So my rule of thumb is that if an idea doesn’t come together in a week to can it. My synopses are always extremely vague (the phrase “after many exciting adventures” is very useful) and once I start writing, the plot twists and secondary characters emerge.

What’s next for you?
Lots! I have a two-book contract with HarperCollins for a paranormal-speculative history series, Immortal Jane Austen. The first one is about Austen and vampires fighting a French invasion in Bath and should be out next summer. I wanted to call it Blood Bath; my brother, with whom I brainstormed the idea, suggested Austen Powers. I’m just finishing up my next Little Black Dress book, Improper Relations, and I have no idea what the third one will be, although I have a very appealing title knocking around in my mind (Mr. Bishop and the Actress). I also have a two-book contract with Harlequin Spice, writing erotic contemporaries as Liz Diamond, and the first of those will come out in early 2011. I’m very lucky; I’m enjoying the glow of having all these exciting projects to work on, and then remembering that yes, I do actually have to write them.

Thanks for letting me pretend to be a guest here today, Megan! Today I’m also over at History Hoydens and guest blogging at Romance Buy the Book about writing a historical bad girl. There’s a complete blog tour on my site (and a contest!)

A Most Lamentable Comedy doesn’t have US distribution but you can buy it with free shipping worldwide from bookdepository.co.uk.

A Diamond of the first water, I presume! Janet, you will be everywhere in all your personas, as it should be. The books sound great.

What an exciting interview, Janet & Megan. Hats off. News of Janet in her various guises and authorial sexual shenanigans is very, very good news for a fan.

Yay, Janet! Is there any word if “A Most Lamentable Comedy” will be released in the U.S.?

I consider myself so lucky to have my very own copy of A Most Lamentable Comedy!

Leanne, on Janet’s website, she has a link to book depository that has free shipping.
Here it is Bookdepository.co.uk

HI Maggie, Keira, Leanne and
Today I’m at the beach where I can’t get the internet at the hotel to work and am in the Virginia Beach library (of which I am now a card carrying member) anad they have the most bizarre screes so I can’t actually see what I’m typing.

It won’t be released in the US, Leaanne, unless a US publisher buys it, but with FREE SHIPPING WORLDWIDE from bookdepository.co.uk it’s affordable and apparently they ship fast.

Thanks for comenting,e veryone, and remember I’m at History Hoydens and Romance b(u) the Book today to, where you also have a chance to win a copy.

Will drop in again later via Starbucks

Congrats on the new releases and looking forward to all the upcoming books, Janet!

Also I’m delighted that the bears wandering into my neighborhood led to a post that inspired a story element. Fun. 🙂

Oh goodie!!! I do love naughty characters. 🙂 (and I’m so jealous you’re at the beach…)

I’m jealous of the Divine One who has a copy of A Most Lamentable Comedy. Must hope over to the Depository and get mine posthaste. You are a very busy author, Janet! How on earth do you manage the self-discipline it takes to write so many fabulous books?

Janet, I love your portrait pic. Is it new or did I miss seeing it earlier?

I guess the important question is… will your book only be available in the UK? When will I be able to get it here? 🙂

I am delighted to say I have a copy and it is at the top of my TBR pile. I am equally excited and intrigued by all the other projects you have at hand. Perhaps we should dub you the hardest working romance writer out there, lol.

How do you keep them all straight.

Congratulations, Janet. The cover is gorgeous. I enjoyed ‘Rules’ so I’m looking forward to this, especially since I have a weakness for animal characters and non-explicit love scenes. ‘Blood Bath’ and ‘Austen Powers’ both made me groan equally so if you’re in competition with your brother I can’t say who came out ahead!

Back from the beach and embarrassed that I didn’t return later that day as promised, but thanks everyone for dropping in and commenting!