To have one’s novel noticed by a person of great power and influence must be a wonderful thing. Certainly Ronald Reagan’s public mention of The Hunt for Red October as “un-put-downable” contributed to Tom Clancy’s successful writing career. Oprah Winfrey’s Book Club*, of course, shot many a book to the best seller list. For Romance, of course, there was Kelly Ripa’s book club selection of The Bachelor by Carly Phillips.

Jane Austen had her own brush with the powerful and influential. In 1815 she was in London visiting her brother Henry who became ill and was seen by the Prince Regent’s physician. After that contact, the royal librarian, James Stanier Clarke, called upon her and invited her to Carlton House where he told her His Royal Highness had given his permission to dedicate her next work (Emma) to him. In that era, what bigger honor could there be?

What would be comparable today? If our popular president took notice of a romance novel, perhaps?

Harlequin author, Geri Krotow, recently moved from Annapolis, MD, to Moscow, where her Naval Officer husband is posted with the American Embassy. Geri, a graduate of the Naval Academy and a former Naval Officer herself, had barely unpacked when the opportunity came to see President and Mrs. Obama at the Embassy during their visit to Moscow. Geri wanted to give something to Michelle Obama in thanks for her support for military families. She decided to give Mrs. Obama a book, her first, A Rendezvous to Remember (Harlequin Everlasting Love, 2007), the only book that wasn’t still packed. Geri’s (and my) web designer, Emily Cotler of Waxcreative Design, picked up on this exciting news and got an article about it published in the Huffington Post, the online newspaper.

I’ll let you know if Geri receives any word from Michelle Obama, who hopefully will read the book. Think of it, though. We have proof that a romance novel is in the White House!

Was Jane Austen as excited as Geri about coming to the notice of the Prince Regent?
All indications are she was less than thrilled. Austen had no admiration for the Regent’s profligate lifestyle, especially his treatment of his wife. Her question to Mr. Clarke was if it was “incumbent” on her to accept this honor. It was. 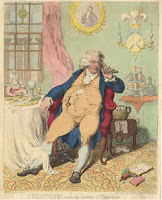 Here is her dedication, delicately worded, perhaps satirical, and mentioning nothing of gratitude:

I suspect Geri would word a dedication to the Obamas a bit more exuberantly. Me? I’m thrilled for her! I think the moral of her story is, we should never be apologetic about writing romance, no matter who we speak to, even the President of the United States!

What romance novel would you like to put in the hands of which powerful and influential person, if you could?

NOTE: Official White House photo showing the President and Mrs. Obama in the receiving line. Geri is the blonde head behind the woman touching her cheek. You can see Geri’s book in Obama’s hand.

*One of Oprah Winfrey’s Book Club Selections was A Million Little Pieces by James Frey, which was debunked by The Smoking Gun as being partially fabricated. The Smoking Gun discovered the fabrication because my daughter’s friend emailed them to find and print Frey’s mug shot. His name appears in the acknowledgements of Smoking Gun’s book, The Dog Dialed 911.

Hmmm…. I think I’d go back in time and give Henry VIII Katy Cooper’s romances, Prince of Hearts and Lord Sebastian’s Wife, because they’re alternate history where Henry DOESN’T become king… And this isn’t a romance, but I’d give The Daughter of Time to Richard III. Then I’d give all three books to Henry VII. And I’d love to thwack Shakespeare with Susan Fraser King’s fabulous novel, Lady Macbeth. So there!!

What a concept, Barbara! Going back in time…..

Barbara does have a good point with going back in time. I think I’d like to give Edward I, or Edward the Bastard as I call him, Lord of Scoundrels so that he can see men can grow out of their bastard stage and he should have.

I think I’d give George W. Bush and Dick Cheney Faking It by Jennifer Crusie. Although they’ve probably read it as they follwed Gwen Goonight’s advice “If you can’t be a good example you’ll just have to be a horrible warning.”