Wuthering Heights and a mess on the floor 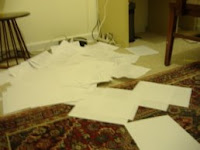 This is what a finished book looks like.
Last night I finished Improper Relations, my next Little Black Dress book, and this is the entire manuscript dropped on the floor as I went through it page by page after a hard copy edit.

Whew! I’m still catching up from Nationals and then a Mullany expedition to the beach last week where I thought I’d have internet but didn’t. Here’s a pic of my mother in law Rosie Mullany to whom I dedicated A Most Lamentable Comedy.

But today is the birthday of Emily Bronte (1818-1848) so I thought we should talk about Wuthering Heights. I consider it an odd, difficult novel, full of shifts in time and narration. Where Jane Eyre (by sister Charlotte) has a clear legacy in popular fiction (plain, poor, virtuous heroine–check; brooding dark hero–check; brooding dark house–check; unspeakable secrets–check), what influence has Wuthering Heights had? 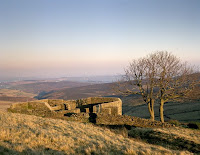 It’s almost as though Wuthering Heights stands alone, the odd cousin who smells of elderberries and talks to herself in a corner at the family gathering. We know she’s there, we know she’s part of the family, but she doesn’t quite fit in. Somehow she takes things to extremes–Heathcliffe is dark and brooding yet psychopathic; the heroine dies; the bleak landscape is the star of the show.

And what about the movie versions? Do you think any of them crack the Wuthering Heights code? There’s the 1939 classic with Laurence Olivier and Merle Oberon (left); the 1992 version with Juliette Binoche (whom I love, but why??) and Ralph Fiennes with bad hair. 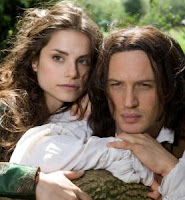 The most recent is the 2009 PBS adaptation with Charlotte Riley and Tom Hardy (both of whom look far too clean in this pic and yet another bad Heathcliffe wig). And according to this article Keira Knightley and Lindsay Lohan are battling it out for the role of Cathy in yet another remake.

But to me, the most brilliant adaptation is this one by Monty Python (it starts about a minute in after some silly stuff with a policeman but this was the only one I could find without Spanish subtitles):

What do you think? Is there a movie version you like? A book you feel that is particularly influenced by Wuthering Heights?

My blog tour continues tomorrow with a visit to the Word Wenches and more next week–visit my website for the whole schedule (and enter the contest, which is ending soon, while you’re there).

Interestingly enough (or maybe not), I wrote a senior thesis on Wuthering Heights for my Psychoanalytic Approaches to Literature class. Whoa, is that book FULL of subliminal desires and forbidden actions. I think the first half is great, hate the second half. I don’t think any movie version has done it justice, although Timothy Dalton was a good Heathcliff.

Wuthering Heights was never a favorite of mine, but the *real* movie version will alway be Sir Lawrence Olivier and Merle Oberman. Monty Python is a strong second, though.

No matter how many times I’ve seen it (and there have been many) I sob each and every time I view Cathy’s death scene in the Olivier/Oberon version. That movie remains among my all-time favorites. (I must confess here that I still cry each time Hugh Grant proposes to Emma Thompson in that version of Sense & Sensibility.) I had a high school English teacher who made Wuthering Heights come alive for us and declared that the marriage of Cathy & Edgar was the biggest mistake in English literature – just look what it caused!

And to me Timothy Dalton’s most perfect role washis version of Mr. Rochester in Jane Eyre.

For me it’s the scene in Jasper Fforde’s Lost in a Good Book that is the best use of Wuthering Heights. In it Thursday Next, a literature detective, is conducting an anger management session with the characters of Wuthering Heights when people from other books start to attack and try to kill Heathcliff because they are so angry about him and Cathy. It’s really a super funny scene. You find out that the real Heathcliff was killed by assassins years ago and now when a new one comes about he has to have a bodyguard and anger management classes. It’s pretty funny.

I was really excited when I first heard about the version of WH with Ralph Fiennes as Heathcliff, but I agree with you, Janet, it was so disappointing! And Binoche is an excellent actress, but why in the world they thought a Frenchwoman would be the best casting for Cathy boggles my mind.

Monty Python? Ooh, so silly. Though much shorter than the Binoche version!

I haven’t seen the most recent Wuthering Heights adaptation but enjoyed the other two you mention, in different ways. There’s also a 1998 version with Robert Cavanah and Orla Brady that I liked. One of my friends thinks it’s the most true to the book though I’m still torn between it and the Fiennes/Binoche version.

LOL on the Monty Python!!!! I actually really like Wuthering Heights, though it’s NOT much of a romance novel (Heathcliff and Cathy are really quite loathsome–their love for each other is their only redeeming feature and look where it gets them! Though I think it sometimes shows up, much cleaned up, in modern romances). I love the setting and the darkness, the complexity of the characters.

I thought the recent Tom Hardy version started out very promisingly, and then went downhill fast. I actually read that filming has now started on the new version, with neither Knightley or (TG) Lohan, and not Natalie Portman who backed out at the last minute. Gemma Arterton is Cathy and Ed Westwick Heathcliff, which should be very interesting. 🙂

Of course the version in which I loved the casting of Heathcliff AND Cathy has to be the Olivier/Oberon version. The acting in it is just gorgeous.

However, I did like Timothy Dalton’s performance. I LOVED him in Jane Eyre. What a great tortured gothic hero he makes.

Haven’t seen any of the later versions. This newest should be interesting.

Anything by Monty Python is must-see tv to me!

I actually like Wuthering Heights. It was one of the earliest examples of a romance novel in which the characters’ inner demons got the best of them.

Jane Austen, you didn’t mention that Miss Haversham is the facilitator of the anger management group. I love that scene too!

Louisa, I’d forgotten about the Timothy Dalton version, but I thought he was too good looking for Mr. Rochester (and for Heathcliff by default).

I have to agree that the man WAS a bit too good looking for either of those heroes, but he was LOVELY to look at in those roles!

Janet, it’s been a long time since I read that particular section of Lost in a Good Book. My friend and I were talking about how Fforde really understood the characters that he read. He really brings them to life. I wasn’t overly fond of Mrs. Havisham in Dickens, but in Fforde she’s great. Plus I LOVE the scene where Fanny Dashwood says she had to kick out the girls to make the story go on, but she really didn’t want to do so. It’s just so perfectly Fanny Dashwood.

Much too fierce a book for me to get when I was younger, but I love it now.

There is a way-strange Wuthering Heights movie made by the Spanish surrealist director Luis Bunuel during his period in Mexico (maybe the 1950s?) — little seen, we caught it at some film festival maybe 15-20 years ago. I can’t remember much of it except that Michael and I were absolutely enthralled by its ferocity. The first scene begins with some child, no doubt Cathy, torturing insects in some way or another (clearly the first scene of the classic western The Wild Bunch is a homage). We absolutely felt that Bunuel had caught something of Emily Bronte’s vibe.

Not a perfect book (young Cathy and Hareton are yawners) but a great great one that I read every few years with awe, astonishment, and delight.

Although I usually love 19th century English fiction (I caused great shock in high school by actually loving Silas Marner!!), Wuthering Heights just never appealed to me. Laurence Olivier can read the phone book and I’m enthralled, so that’s why I made it through the movie. Give me Austen, Dickens, Hardy, and the other Bronte (Jane Eyre is a major favorite) but you can keep Wuthering Heights.

BTW- that Monty Python skit gets the movie version vote from me, lol!

My biggest memory of Wuthering Heights happened when I was a senior in high school. I had to read it for a class and misplaced my copy. My mother had her bridge club over and she and I got in a huge fight. We have the doors that have the top and bottom connected so you can open only part of the door…I don’t remember what they are called. I jumped over the bottom half and left the house in the middle of a cold and snowy northwestern PA January night. I walked for forever in a t-shirt and pants and socks with no shoes. My mother was frantic to find me. I went to a friend’s house and hung out there and she drove me home (Yay! No more walking in the snow). I guess I had my own Heathcliff/Cathy throwing a fit moment. The novel must have really inspired me.

One of the most angst Wuthering Height is the early Brithish 1970’s version with Timothy Dalton. Dalton was young in this movie and represented an appropriate Heathcliff. Wuthering Heights is an extreme romance.

The current teen sensation “Twilight” is very loosely based on the classic WH, and the author even gives “shout-outs” to the novel by quoting passages in the book.

the twilight author “borrows” the story of a woman caught between two loves: the one she has known since a child and the handsome stranger who has temporarily woo-ed her. although she professes her undying love for the “friend” she chooses the handsome stranger and loses her friend. of course, he returns and eventually sets his sights on her daughter instead.