Nubbled, pebbled, and plain worn out 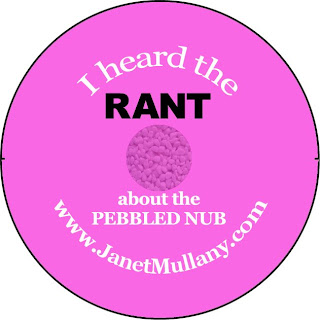 If you’ve ever had a conversation with me for, say, longer than three minutes, or attended the workshop Pam Rosenthal and I occasionally give, Writing the Hot Historical (or, as we call it, Pam and Janet Evening) you will have heard it:

The Rant About the Pebbled Nub.

To quote William Blake, I will not cease from Mental Fight, Nor shall my Sword sleep in my hand until I have achieved, not Jerusalem, but the eradication of this most overused, tired, and trite cliche. Yes, it was probably nice and boat-floating the first time it was used, but now it’s all over the place, shamelessly recycled and a great stumbling block in the boudoir.

Worse, it has spread from above the waist to below the female belt (if you know what I mean and I think you do) so that each heroine potentially has three of the darned things for the hero to lave. And that’s another one. Lave? Is something wrong with the good, old-fashioned, venerable and in-your-face lick, derived from the Old English liccian? Why resort to a Latin-based word? Latin lovers may be sexy, generally Latin-based words convey the opposite; just one of those strange English-language things. (Lave is next on the hit list.)

Then there’s the equally overused nubbin (ugh): “dwarfed or imperfect ear of corn,” 1692, Amer.Eng. dim. of nub.–to my ear it somehow suggests a piece of sewing equipment, like bobbin.

But it’s not the word’s origins I take exception to, it’s the use and misuse, the kneejerk laziness inherent in using a term that has long since lost its impact. The counter argument is that everyone knows what a pebbled nub (or nubbin) is; it’s a familiar reference term, a landmark on the way to the HEA. It keeps the story going. It doesn’t pull (most) readers out of the moment and the building sexual tension. In other words, within the context it works, or it can work. Substitute a stupendous and original metaphor and the reader will stop, ponder, gasp in awe and lose the flow. I think there has to be a solution. Instead of relying on tired old cliches, it’s our job as writers to create something so hot and squirmy-in-the-seat and relevant to the character’s voice that it pulls the reader further into the story.

Because it is after all the character’s voice and experience that make the story. Would your heroine really tell her best friend the morning after that the hero laved her nubs? No? I didn’t think so.

I’ve used here one of my very favorite sources, the Online Etymology Dictionary . I wrote to them a few years ago trying to solve a language problem and I’m pleased to say that their research came up trumps, when I was trying to find a term for a particular item of the female anatomy that doesn’t really seem to have a vernacular. Search tickler and see what you come up with.

What are your least-favorite cliches? What pulls you out of the story or sucks you in? (No, Caroline, we don’t need the long s here, thank you very much.)

Over at The Good, The Bad and the Unread today with a CONTEST. Please stop by and say hello!

There is a fine line between idiom and cliche, but in general, lazy writing pretty much frosts me wherever and however it shows up.

The phrase or event of first resort (i.e, the pebbled nub) is rarely one that should be left in.

I will see your “pebbled nub” and raise you a “male nipple“.

Is there something inherently unmanly about nipples? Check out the link above for some 80 truly tautological uses of “his male nipples” (often found while ferreting around in chest hair).

Looks like I am reading the Wrong- or maybe the RIGHT- romances. While I can certainly figure out what a “pebbled nub” is, it isn’t a phrase that I remember.

I think I will stick to my non-sexy Regencies.

I hate it when the author describes the man being almost too big to fit. Or some variation of that. I really just want to be like: How is that appealing? Because that just sounds uncomfortable to me. But what would I know? I’m an aging spinster.

@ Gemma, obviously there are male nipples and female nipples and when they love each other very much and get married they have puppies. I thought everyone knew that (thanks for the hilarious google search).

@ LadyDoc, if there’s a pebbled nub it crashes to the bottom of the sexiness meter.

(often found while ferreting around in chest hair).

PFFFT!!!
You just made my day.

And why are men’s chest hairs always silky? Do they condition them? And does it really matter? Personally I’m not a huge fan of chest hair and don’t want to play with it….

I don’t mind a little chest hair…sometimes it seems unnatural to be without it (on a man, that is…) but “ferreting” just makes me say, “Ewwwwuuuuu!”

Writing is hard, though. I agree with Carolyn! I love an original metaphor that draws the reader into the story even further, but creating one of those is hard.

I suspect that our Regency misses did not know the exact word for some parts of male and female anatomy, so I would find it odd if they used such terms.

I doubt they would have spoken of pebbled nubs either, though.

“Member” & “Staff” Especially “pulsing member” or “rigid/hard staff” I mean really? Oh, and I once read it as manroot. That one killed me.

Penis or cock, thanks very much. Lets call it what it is. 😀 I think I’d rather have a heroine refer to it as his man bits if she doesn’t know the proper name for it than velvet rod. Does anyone else concur?

Oh and I must agree. Now that nub has more than one meaning, ie nipple, nipple, clit, I occasionally get geographically confused when the hero is “Laving over a nub”.

I am SO glad I put down my cup of tea before I read this, Janet! I attended your and Pam’s workshop on Writing the Hot Historical last year in San Francisco and came home to search my manuscripts for any stray nubs or nubbins. Didn’t find any, but I had to check!

I have to agree with the Divine One. Ferreting should be left to the ferrets, thank you very much and NOT in the bedroom. Okay that just took the conversation up a whole new alley!

It IS difficult to write love scenes and come up with original ideas. And the thing I try to do most is to get into the head of the character in whose POV I am and TRY to think of what THEY might call something. There are words a genteel young lady might not use, but her rakish, dashing experienced lover might.

(My verification word was “pinglers” – Does that mean anything?)

I hate and detest lave. Not so bothered about nub, funnily enough. But to lave means to bathe or wash, or its second definition to pour. It has a very archiac meaning of to wash oneself.
It is related to lavatory and lavabo (where the priest washes his hands before communion).
It does NOT mean to lick. When I see it in romance novels, I know a) the author is probably unaware of the meaning and b) the author has been delving into her thesaurus again.
End of rant.

Hi, Michelle!!!!!! It is great to see you here and to think it only took one of Janet’s rants to get you to comment.
(I hate lave, too, except when playing online scrabble)

I despise some of the euphemisms found in the romances of the 70s — how on earth someone decided “manroot” was sexy is beyond me. One of the descriptors I’ve rarely seen but when I do it pulls me totally out of the story is “pelt”. It’s one thing for a man to have chest hair, but if he has a pelt I think of mink, and it’s not a flattering comparison. Mink have beautiful fur and it’s definitely silky, but they’re nasty and aggressive creatures. Not to mention that if a man has a pelt I’d think Neanderthal or Cro Magnon, not Hero.

Not exactly what you asked for, but three of the things that make me insane are when a ‘who’ is where a ‘whom’ should be, and when professional wordsmiths don’t know the difference between ‘phenomenon/phenomena’ or ‘millenium/millenia’. Small details but they make me insane.