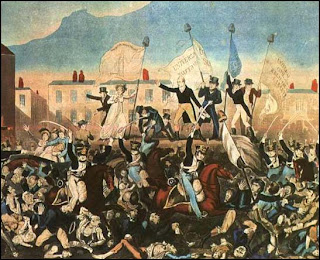 August 16 was the anniversary of the Peterloo Massacre. On that date in 1819, 60,000 people gathered at St. Peter’s Field to listen to radical orator Henry Hunt and to protest against the Corn Laws and to seek Parliamentary reform. The local magistrates, frightened by the sheer numbers of protesters, ordered the yeomanry to disperse the crowds and arrest the demonstation’s leaders. The yeomanry (who were well-to-do tradesmen opposed to reforms) did a poor job of it and the 15th Hussars were ordered to charge the crowd and rescue the yeomanry. Eleven people were killed and 500 injured and the resulting outrage of the government’s support of the incident helped fuel the reform movement.

There are conflicting accounts as to what happened at “Peterloo,” the name, taken from Waterloo. Certainly the most famous of the protests of the time, it was not the first. The book I just turned in (Yay, it is done!) in part takes place after the Spa Fields riots (believed to be incited by provacateurs in the government’s employ) and the March of the Blanketeers, which was dispersed before reaching London. Before these events there were the Luddites, who did become violent, smashing the machinery of the mill owners. 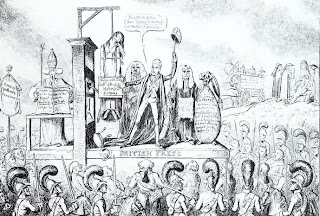 The Tory government cracked down with harsh laws, the Gag Acts after the Blanketeers march and the Six Acts after Peterloo. These basically made it illegal to protest against the government.

It is easy to see these as extreme and unfair measures depriving citizenry of free speech, but one also must remember that the men passing the laws were doing so in the shadow of the French Revolution. The Reign of Terror, during which 17,000 were executed, must have made a deep impression upon the aristocracy. I think this made a deeper impression than the fact that a whole country was lost to the American Revolution, which, of course, was founded on the right to free speech!

I realize this blog leaves nothing for you to comment on! So my challenge is, post the question I should have asked at the end of this blog!

Are town halls becoming the new Peterloo with people bringing weapons to places where the President of the United States is speaking? Or is the unrest really between the attendees of the town halls?

The Town Halls in the US are certainly the showcase of free speech in all its facets these days. One wonders how these events, if at all, will fit in with the evolution of free speech in its historical context.

Jane Austen beat me to it!! (that sounded weird to say lol). It seems we learn nothing from history, including how far freedom of speech will take us before we no longer have it, and civil war, which I am told is on the horizon by my extreme right wing friends and family. Being a liberal, I want to cry when I read how these same scenes have been acted and re-enacted repeatedly, and we don’t seem to learn. Great blog Diane – food for thought for the day.

Interesting post, Diane, and congrats on getting that book in, for which I am waiting impatiently. 🙂 I have often wondered which side I would have chosen if I had been alive then. I want to believe that I would fight for greater freedom, not less, but would I understand the underlying issues? The ones not upfront and obvious?

It is easy to see these as extreme and unfair measures depriving citizenry of free speech, but one also must remember that the men passing the laws were doing so in the shadow of the French Revolution.

Nothing justifies the deprivation of free speech, then or now. The men passing the laws might well be in the shadow of their equivalent of 9/11 but they were elected by their peers, since only one in four males, defined by their property ownership status, had the vote. Large industrial cities such as Manchester were woefully unrepresented, with a huge disenfranchised population dealing with a stupendously high cost of living. The price of bread, the staple of the poor, had risen dramatically from the turn of the century.

Jane A’s was my thought as well (great minds, etc). I often think the idea of free speech and assembly has somehow gone a little haywire. The current political climate almost reminds me of the old telephone game. By the time the whispered message gets to the last person, whatever integrity it ever had has been corrupted. I am continually alarmed by those who receive ‘the truth’ from untruthful sources.

When have you risked danger to fight for something you believe in?

Yipes! I never meant to stir a political debate! But Free Speech does seem to be a live issue these days, doesn’t it?

Janet, I do, of course, defer to you in matters involving the history of your native land!

Megan, GREAT QUESTION!!!! I’m going to answer it! next comment.

Answering Megan’s question: When have you risked danger to fight for something you believe in?

Well, I probably did not risk danger but I did risk negative consequences when I was active in advocating for better retirement for workers in the county where I was a mental health professional, including speaking at public meetings in front of the Bigwigs. We weren’t hugely successful but some of our predictions have come to pass with the recent drop in people’s 401Ks. Unfortunately.

When I was a senior in high school I wrote an op editorial for our local newspaper about why we needed a new school. There were huge debates about it because of the raise in taxes. People wrote to me personally and attacked me verbally on the streets. They said I was a rich bitch born with a silver spoon in my mouth and I had to no right to discuss taxes and they threatened me, but no physical violence ever happened.

When my dad was younger the KKK burned a cross in his front yard because his family was prominently Catholic.

One of my friends was tied to a railroad track when he was six by children of members of the KKK and had a homeless man not come by and see him and untied him my friend would have been run over by a train just for being Northern born and moving to South Carolina. He is now back north.

I may not believe in what people are saying at these town hall meetings, but I will defend to the death their right to say it. Nobody has the right to tell someone else what to say or what to believe in. One may certainly disagree with someone else’s words or political beliefs, one may even try to persuade them with the power of their own words to cast aside those beliefs. However, nobody – not a politician, not society, and especially not the media has the right to tell someone what they should or should not say or believe.

Politically correctness is a subtle form of coercion. If you truly believe something say it, but be prepared to deal with the consequences – head up and head on.

I taught at a high school for students who had been thrown out of the mainstream schools for all sorts of discipline problems. On more than one occasion I stood between young men of different races who were ready to beat each other to a pulp. I did it because I knew no matter how much they hated each other, they would never hit me. They weren’t raised that way. And there was their common ground. I never assumed one side was right and one side was wrong based on their race. I forced them to sit down and talk it over very much in the fashion of a mother with two sons who were fighting as brothers do. The fact that I laid no blame and really listened to both sides and acknowledged that both sides had a grievance and had a right to express that grievance made all the difference.

Janet wrote: It was about a privileged few protecting their interests and power.

But isn’t that what started the French Revolution? I think those in power were afraid their interests and power would go the way of that of the French aristos. They feared that if they didn’t clamp down hard, things would get out of hand as they had in France. That doesn’t justify their brutality and indifference to the plight of the common people, of course — but it does explain it to some extent. Fear makes people do all kinds of awful things to one another.

Jane Austen, what stories those are! I’ll bet you had no idea what would happen just because you spoke up. And the train track episode is shocking.

O Doggie One, I can just see you stepping in between two angry teenage boys!!

Judy and Barbara, I think I was trying to understand the mindset of the aristocracy of the time. I think time has shown that free speech and equality were the right way to go.

Fear makes people do all kinds of awful things to one another.

And so does fear-mongering. Which was what the British Parliamentary post-Waterloo committees, like the 1817 Committee of Secrecy, were happy to do — especially when the Home Office sent out provocateurs to foment dissent (and arrested and hanged the dissenters). The strategy was to hype the fear in the rulers while stirring up dissent of the ruled.

The Committee wrote that the local radical organizations intended to “prepare the minds of the people for the destruction of the present frame of society, by undermining not only their habits of decent and regular subordination, but all principles of morality and religion.”

And if you or your friends kind of liked keeping the people decent, regular, and subordinate, why NOT send in the Hussars… as a kind of preventative strategy?

The fact that we (or I, in any case) don’t do enough to protest “preventive” measures today doesn’t mean that there weren’t outrages then and or that there aren’t now.

And some do protest — now AND and then and sometimes most eloquently. So here’s my annual link to Shelley’s response to the Peterloo massacre: The Masque of Anarchy.

Thanks for commenting, Pam!