I confess that I have a very pretty commute to work. It’s not all that long (40-45 minutes door to door) but it’s through the vineyards here in Sonoma County, California. Every so often I actually notice that I’m driving through some lovely countryside. Mostly, I use the time to listen to the radio and find out what the heck is going on in the world. Quite often, though, I turn off the radio and think about my WIP (Wreck in Progress)1

Lately, there’s been some construction work on my route home and in order to avoid sitting in traffic ::::shudder:::: I’ve been taking the long way home. It takes longer, just under an hour, but it’s through the Sonoma Mountains then over and down into the valley to the back roads to my house.2 Until this detour I’ve been taking, I’d never been in the Sonoma Mountains, even though from my house we have a rather stunning view of them. Too often I take that view for granted, too. I live 30 minutes from the tallest tree in the whole freaking world and I’ve been to see it once since I was an adult. sigh

I think that I might, from time to time from now on, take this road not traveled to get home even if it does add few extra minutes to the drive. Sometimes, beauty is an end in itself. I do count myself quite lucky that my normal commute can be made without ever driving into a city (except when I get to work.) I think I’m even luckier that there’s a way home that takes my breath the way this does.

My apologies that my pictures don’t do justice to how pretty this is. Also, in order not to die in a flaming wreck of metal, there were prettier pictures I didn’t take.

Part of the drive goes through Glen Ellen (Population 992). You may be familiar with it as the city where Jack London lived out the final years of his life.

Please keep in mind that I took these photos with my iPhone. (I pulled over to take a couple of them.) The road is, in fact, even narrower than it looks in some of these photos. There’s barely room for one car.

1. OK, so that’s a wee joke. But whatever book I’m working on at the moment is always a wreck until the last minute. Most writers seem to explode that acronym to Work In Progress.

2 Rats. I forgot to get a picture of the giant chicken. Maybe tomorrow.

So, any roads taken you’d care to share in the comments? 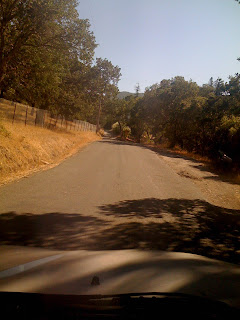 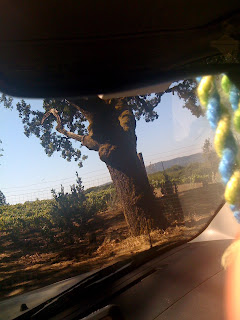 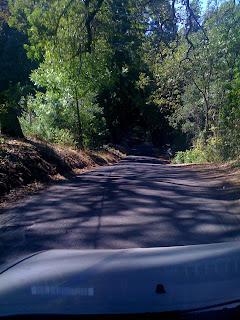 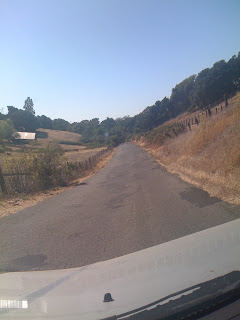 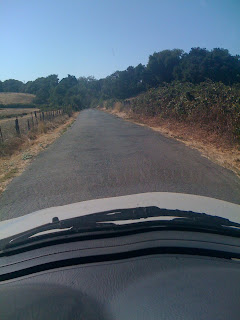 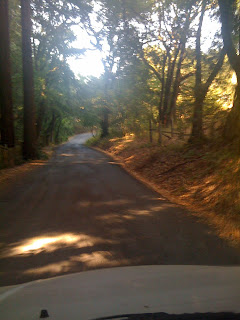 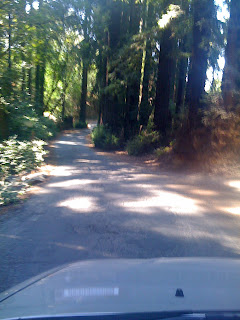 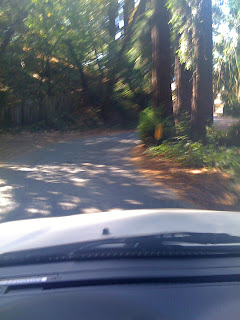 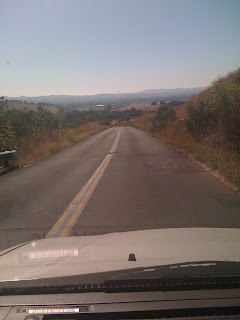 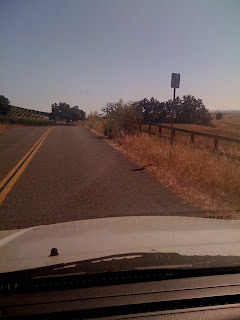 I drove through the Cabot Trail on Cape Breton one fall. The most spectacular scenery I’ve ever seen outside of Scotland (and I can see why Nova Scotia really is New Scotland).

My commute is less than twenty minutes if the roads aren’t icy.My drive home is beautiful, not only because the work day is done (you don’t see the mountains driving out). I go through a charming college town, and I do try to avoid hitting the kids crossing the street. 🙂

My drive to and from work is pretty boring until fall comes. In the fall it’s beautiful, but the other times it’s just so so.

My commute now takes me from the upstairs of our house to the downstairs, but when I drove to work, I used to avoid our infamous Washington Beltway and drive through neighborhoods. No matter what street, Virginia in the spring is the most beautiful place!Cherry Blossoms, Dogwood, azaleas, jonquils, Forsythia. Just beautiful.

Last fall, we drove through that area on vacation. We took Dry Creek Road starting at Highway 29 and followed it all the way back to Highway 1. We went through the mountains and saw some incredible scenery. What was most amazing to me is that we went straight from forest and mountains onto beautiful coastline. It was just stunning! Best of all? We ended up back at the ocean at sunset.

Your pics just brought back some fantastic memories.

Beautiful! Thank you for sharing that lovely little side trip. I’ve had some great successes with trying new ways and some miserable failures. One of the successes was when I was biking to pick up work. The short way was the freeway frontage road, also not particularly safe, but direct. I tried the side streets and discovered beautiful homes and landscaping that made the 22-mile ride a lot more pleasant (and safer!).

Great stories, everyone! I’ve been in New England in the Fall and gosh that is really, really pretty.

@Diane Gaston – I wish I had your commute!

@Jen – oh, how pretty. Northern California is, as you know, quite lovely.

@Judy – when I lived in the East Bay, I often rode my bike to work. I quickly learned to get off the main roads and onto side streets. And I discovered some lovely areas.

Those are lovely pix, Carolyn! I actually like commuting via the subway, when I did so, because I like people-watching so much. Now, like Diane, I go from downstairs to upstairs. I do like the view from my stairs.

What a pretty drive! My own commute is short (about a half hour), but not as scenic. If I go the back roads, though, there is a field with some cows in it. 🙂 (I sometimes wish there was better public transportation here so I could read on the way to work, but the drive is not bad because I can think about plotting problems or try out bits of dialogue aloud without getting strange looks from people. I doubt the cows care)

That looks like a drive to the cottage!
On tenterhooks about the big chicken, now.
There’s a big gander on the way to my cottage…

I recently installed my son at Sonoma State. Not quite as far north as you are, but it’s a beautiful campus. Charles Schultz made huge donations to the school.

Actually, @JaneGeorge, I got my MA at SSU. I live about 20 minutes by the backroads from the campus. And SSU is north of me. I grew up around here and when we were kids (who all loved Peanuts) my mom wrote him a letter. He wrote back and to this day we treasure his reply.

For those who are wondering, the giant chicken is a statue of chicken, not an actual chicken. Must be 10 feet tall at least. It’s in someone’s field.

@JaneGeorge, your son could drive by the giant chicken. It’s on Pepper Road.

lol, I’ll tell my son to take his dorm mates to see the giant chicken!