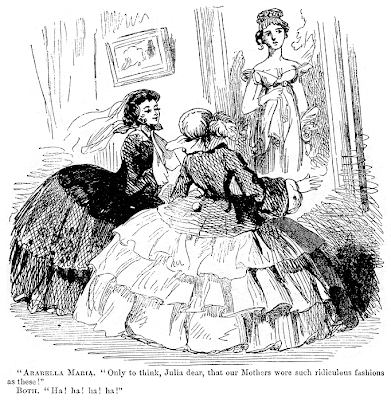 That’s always something that alarms me when I consider our interpretation of the Regency. If not our characters themselves, then certainly the half-dozen babies of the epilogue grew up to become … like this.

Did it happen overnight or was it a gradual change in sensibilities–or, to put it another way, were the Georgians more Victorian than we like to think?

Pretty much, yes. For instance, William Bowdler (1754-1825) published his improved edition of Shakespeare in 1818, the Family Shakespeare, which omitted certain vulgarities which might offend or corrupt the innocence of women and children during family readings. Don’t you think “Out, out crimson spot!” has a certain appeal?

As early as 1710, the modest pamphlet that grew to be the bestselling book of the eighteenth century, Onania: or, The Heinous Sin of Self-Pollution, and all its Frightful Consequences in Both Sexes, Considered, warned against solo sexual activity. Yes, sex for Georgians was fraught with moral peril and the best approach was to grit your teeth, think of England, and try not to enjoy it because this was all about procreation and duty. 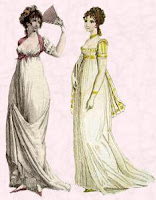 A brief glimpse of fashions during the first couple of decades of the nineteenth century shows women’s clothes evolving from diaphanous muslins with high waists to shaped bodices and puffy sleeves and lowering waistlines, with a shape dictated by corsets and a gradual restriction of movement.

Yes, indeed, dear Mama did appear half naked in public, just like the sensibly dressed young ladies in the cartoon. 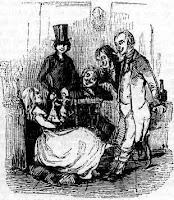 Thackeray’s Vanity Fair, published in 1847-48, was illustrated by the author who showed his characters dressed in “contemporary” clothes.

Tastes had changed, as Thackeray explained:

It was the author’s intention, faithful to history, to depict all the characters of this tale in their proper costume, as they wore them at the commencement of this century…I have not the heart to disfigure my heroes and heroines by costumes so hideous; and have, on the contrary, engaged a model of rank dressed according to the present fashion. 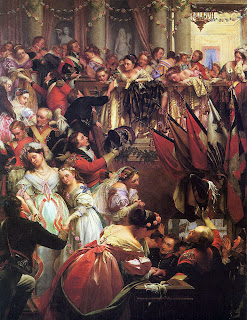 Similarly, the painting Before Waterloo by Henry Nelson O’Neil (1868) has not an Empire waistline in sight.

But within a couple of decades tastes had changed once again and with the passing of time came a certain nostalgia for the past. A genre of painting emerged that showed the big bad Regency as being pretty, cute, and innocent.

Marcus Stone (1840-1921), Dickens’ friend and later illustrator, painted a series of genre scenes such as this one. It’s related to his painting In Love that HarperCollins, bless their heart, used for the cover of The Rules of Gentility (same characters, same silly hat, same ribbon and basket, and he still hasn’t plucked up the courage to propose to her!).

When you’re reading or writing do you ever consider that the Regency is going to become the Victorian age? Do you want to? Can you imagine the family portraits becoming objects of embarrassment?

How lovely, to see the beautiful painting from which a detail was plucked for RoG’s cover!

It is rather amusing to think that everything Regency eventually became Victorian. I have often wondered if we are doomed to swing back and forth between the extremes of puritanism and hedonism or if we will ever evolve enough to land somewhere in the middle.

I do often think about the Regency becoming Victorian. One thing that fascinates me and I’ve done a fair share of scholarship on the subject is Victorian children’s novels written by women. When you really read them and see the hidden depths they are quite interesting and really show the inner workings of some females minds and how they felt about being female.

I’ve also read a great deal about Victorian ideas of love and that just gets too confusing to actually explain in a blog comment.

Jane Austen, we should invite you as guest blogger, because now I’m curious as to what the Victorian ideas of love were!

I shudder to think that my babies in the epilogues will become Victorians! It was, of course, a time of great and rapid change, so perhaps some things needed to be over-controlled. Women, mostly.

I stopped my progressive series that began with The Mysterious Miss M because I was getting dangerously close to the Victorian Age!

There were three types of love:
1) The love you have for your wife which was a gentle love…you didn’t tax your wife for physical pleasure
2) There was the love you have for a whore….this is where you got you physical pleasure. Your wife was too frail and precious to actually try certain things on
3)celestial love….this was the purest love and rarely involved physical contact. It did involved letters lots of letters and more often than not happened between two people who were married just not to each other. May and Amy (http://www.amazon.com/May-Amy-Forbidden-Daughter-Burne-Jones/dp/B001329QA4/ref=ed_oe_k)
is a great example of celestial love. It’s also available on Kindle, which I’m sure will please you Diane.

Oh, goody! another Kindle book to read. I sent myself a sample!

I confess, I try not to think about my characters or their children in those fashions. The Victorian styles for mens’ hair I also find quite ugly.

Re Onania, weren’t such books really sort of sex manuals in disguise, hence the bestselling status?

Thanks for posting this. I love the topic.
I more than shudder. When you think of those young girls, so happy in their loose, light and “scandalous” clothing, even able to lounge about without having to sit with their backs straight (see how many of the women in the fashion plates slouch and slump in their chairs),and then, clamp; suddenly you have the rigid heavy robes of the Victorian period. I think it must have been awful for the older generation of women to see their sons turn into stuffy moralizing patriarchs. On the other hand, in the upper classes, the Regency lifestyle wasn’t sustainable. Too many people lost huge fortunes and ruined themselves, their families, and their estates. Perhaps people just got fed with that way of life. Maybe, too, morality was a way for the emerging middle class to feel superior.

Re Onania, weren’t such books really sort of sex manuals in disguise, hence the bestselling status?

I think they were one-handed reading in disguise. Each edition (and there were many) contained new material of the true confessions type from people who were not at all shy about sharing their disgraceful behavior.

Jane George, I think you nailed it!

I confess I’ve been fascinated by this transformation. It’s one of the reasons why I wanted to explore the Evangelicals in the Regency and wrote a heroine in Her Cinderella Season who had been raised in an Evangelical environment.

Some Evangelicals, including William Wilberforce, were very interested in changing the ‘moral decay’ they perceived in society. It was some interesting research!

Every generation thinks it invented sex and morals. There’s always a pendulum, too. But mostly, it’s just to easy to describe a generation as being loose or uptight or what have you and forget that people are always diverse and that for every Libertine or two there was a staight laced pre-Victorian.

Not everyone in the 1960’s was a hippie — there were a lot of people around to provide a counterpoint (because otherwise, what would be the point of being a hippie?) and yet hippies define the era.

The “Victorianism” of the Victorian era surely had plenty of people who were in no way Victorian.

While it’s helpful and probably broadly accurate to describe an era as having a particular sensibility, I do think it’s important to keep in mind that there had to have been a range of individual behaviors that did not fit the overarching sensibility we use as a descriptor.

Going back to the cartoon that started this discussion, my grandmother, born in 1873, used to visit her own elderly grandmother as a little girl. That grannie was called Emma and all her life she wore high-waisted, puff-sleeved dresses, just as she had in her youth. [Might be a touch of Lancashire stubbornness there…]