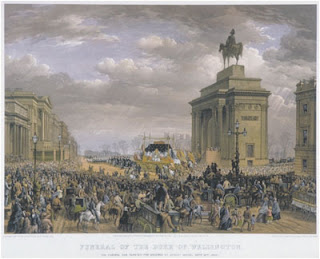 When I was watching Senator Ted Kennedy‘s funeral procession proceed across Memorial Bridge, I was reminded of another funeral procession, one I first learned of when visiting the coach house at Stratfield Saye where the funeral car of the Duke of Wellington is displayed and a recording is played of the titles and honors of this man, the same words recited during his funeral march. The recording goes on and on, complete with the sound of horses’ hooves, a sound that echoes in my mind from President Kennedy’s funeral procession and the ones I’ve attended at Arlington Cemetery.

Do you realize there were similarities between the Duke of Wellington and Ted Kennedy?

1. Both were Irish. Wellington was descended from an Anglo-Irish family going back to 1180s; Kennedy’s ancesors were Irish American, his great grandparents came over during the Irish Famine.
2. Both were fourth sons.
3. Both came from wealthy families, although Wellington’s family fortunes waned a bit after his father died.
4. Neither were stellar students.
5. Both loved music. Wellington once played the violin; Kennedy loved to sing.
5. Both served in the Army (although Wellington’s career was a bit longer and much more distinguished!!)
6. Both had unhappy marriages (although Kennedy’s second marriage was very happy).
7. And, of course, both had long political careers. Wellington was Prime Minister for 2 years but active in politics both before and after. Kennedy’s bid for the presidency failed but he was a powerful member of the Senate for 46 years. And, a huge difference–Kennedy was perhaps our most famous liberal senator and the Duke of Wellington was always a conservative Tory.

Wellington died at Walmer Castle. His body was taken by train to London and he was given a state funeral, an honor he shared with Admiral Lord Nelson and Sir Winston Churchill. His funeral was packed and a grateful citizenry lined the streets of London as his funeral procession passed. To honor him Tennyson wrote “Ode on the Death of the Duke of Wellington“ 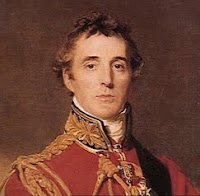 And 250 years later, as I stood in the Duke’s coach house, I felt that same need to honor him, a great man.

Are any of you Wellington Groupies, like me? What do you think of the Iron Duke?

There will be new stuff on my website tomorrow. Take a peek now at my new bookcover.

What a peculiar interesting post. Thanks,Diane and … your new book cover looks great!

Gorgeous cover. It should fly off the shelves. I always enjoy Wellington popping up in novels, but I’m not sure I would have felt comfortable in real life. 🙂

Thanks, Maria….I think. It is a bit peculiar, isn’t it?

I’ll have to showcase the cover on the blog next week, Maggie.

I think Wellington, and Kennedy, for that matter, were not perfect men. But both great men.

I think Kennedy and Wellington were both real/human men. They had flaws and imperfections, but they did strive to do what was right and to make the world a better place. They earned people’s trust and did their best to live up to their potential. Not a bad legacy at all. I have always admired Wellington for many, many reasons.

I cannot warm to Wellington at all, sorry, Diane! He seems to have lacked the kindness that Kennedy certainly had; and he made healthcare reform a priority when he realized in a duh moment that not everyone had access to the same sort of healthcare his family did.

But I bet Joe Kennedy would have felt right at home in Georgian England.

I let out a “phew” when I got to the end of your similarities list and there was no scandalous carriage accident.

I remember the funeral coach at Stratfield Saye! Though reading about the high-Victorian farce of the actual funeral afterward was not so great, it was a very moving display.

Ted Kennedy’s passing is certainly very sad. A great, great champion of the underprivileged, and I wish many politicians would learn from his example!

Wellington was quite the opposite to Teddy Kennedy in terms of how he perceived other people. Wellington really was a snob, really believed that the aristocracy were superior to those beneath them. He was genuinely worried about a Revolution of the Masses such as the French Revolution. Kennedy, of course, made the welfare of the masses his life’s work.
But I still think that Wellington was a great man!

No carriage mishap, Janegeorge, but Wellington did run up some gambling debts in his younger years (but never gambled again) and he did engage in a duel.

I am not really familiar with the life of the Duke of Wellington. O course his name always comes up in Regencies, but I know little about the man. Am looking forward to learning more about him.

Well, people are great in many different ways, yes? Kennedy was a great humanitarian; Wellington a great warrior. Lots of great artists (painters, writers, etc) were not what we might call great human beings. 🙂