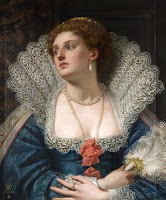 Happy Tuesday, everyone! I hope you’ve all survived the holiday weekend and are looking forward to autumn weather as much as I am (considering it’s above 90 degrees here today, it’s not ready to arrive yet). In the meantime, my Great House Clean-Out goes on (though is almost done), the WIP moves forward (almost half finished!), and next week I will do my Birthday Prize post. Today I’ll take a look at one of history’s great mysteries, the death of Amy Robsart Dudley, which happened on this day in 1560.

Amy Robsart was born in Norfolk on June 7, 1532, the daughter of a prosperous landowner named Sir John Robsart and his wife Elizabeth. When she was about 18, she married Robert Dudley (later Earl of Leicester), a younger son of John Dudley, first Duke of Northumberland. (Robert’s brother Guilford later married Lady Jane Grey, the “Nine Days Queen,” and was executed with her after the failure of their families’ coup. The marriage to Amy perhaps saved Robert from that fate, since he was not available to marry Jane). The betrothal appears to have been a love match, since they had first met about 10 months before and there was little financial or connection gained, and William Cecil (Dudley’s great enemy, or one of them) later called it “this carnal marriage.” The wedding, attended by King Edward VI, took place on June 4, 1550.

They didn’t have much time for marital bliss, though. Robert’s father joined with his in-laws to try and overthrow Queen Mary Tudor on the death of King Edward. Northumberland and Guildford were executed, and Robert spent 18 months in the Tower in 1553-54 (when Amy asked the permission of the Privy Council to visit him). They appear to have never had children, no matter how “carnal” they might have been. Amy’s husband was also a very ambitious man, especially after the downfall of his family. Following the accession of Elizabeth I, an old friend of Robert’s, he spent most of his time at Court and it became clear the two of them were in love. Many people speculated Elizabeth would marry him, “in case his wife should die.” It was also said “she (Amy) had a malady in one of her breasts” in 1559.

Amy managed to come to London and Windsor for Robert’s investiture as a Knight of the Garter in May/June, 1559, with 12 horses and a sumptuous wardrobe provided by her husband, but by 1560 she lived always in the country, at Cumnor Place in Berkshire, looked after by friends of her husband. She continued ordering fine clothes and household fittings, as revealed by the household accounts and her letters of the period.

Her life is much less well-known than her death, which happened at Cumnor Place on Sunday, September 8, 1560, the day of the great fair at the village of Abingdon nearby. Amy gave her permission for all the servants to go, and got angry and insisted when some refused. Her companion, Mrs. Odingsells, refused to go and stayed at the house, along with a Mrs. Owens, the elderly mother of the previous owner, and perhaps a few servants in the kitchen. No one saw what happened, though, and when the others returned from the fair they found Amy lying dead at the foot of the stairs, her neck broken. Her husband was then at Windsor with the Queen, and immediately sent friends to Cumnor to see what was going on. An inquest took place; the verdict was death by accident. Amy was buried in the chancel at St. Mary’s, Oxford, in a lavish funeral. (Her husband did not attend, as was the custom at the time)

Many at Court believed Dudley ordered the murder of his wife in order to marry the Queen. This seems unlikely, as he was not a stupid man and he would have known this would mean a terrible scandal. It was also speculated that perhaps Cecil, who felt his position as secretary and chief advisor to the Queen threatened by Dudley’s ascent, might have orchestrated her death, or at least exploited the rumors that were spreading. In any event, the scandalous death was enough to keep Elizabeth from marrying her “sweet Robin,” though they remained close until his death in 1588. 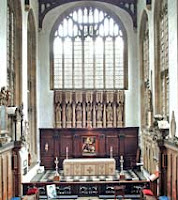 Another aspect of her death is that “malady in the breast,” probably breast cancer. Recent research has shown that osteoporosis is often a side effect of the illness, which could have caused her neck to break on a fall. It’s also said that she might have committed suicide, because of the pain of her illness or her sadness at the rumors of her husband and the Queen. This would explain her insistence on sending the servants away that day.

As early as 1584 speculative works appeared about the mysterious death, in a libelous pamphlet called Leycesters Commonwealth; a 1608 play called A Yorkshire Tragedy centered around a fall from a staircase and a political scandal. In the 19th century people again became fascinated by Amy’s story thanks to Sir Walter Scott’s novel Kenilworth, which turned her into a tragic heroine (as you might guess from the fact that all the illustrations I could find were sentimental Victorian scenes!). Recently several books have also featured the incident, including Fiona Buckley’s To Shield the Queen, Philippa Gregory’s The Virgin’s Lover, and Judith Saxton’s The Bright Day Is Done: The Story of Amy Robsart. While there are many non-fiction accounts, I like Sarah Gristwood’s 2008 biography Elizabeth and Leicester. I also found a book coming out in 2010 on Amazon.uk called Death and the Virgin: Elizabeth, Dudley, and the Mysterious Fate of Amy Robsart.

So, what do you think happened? I tend to think it was a tragic accident, though it does have several puzzling aspects which have made it fruitful topic for historical speculation. If she had died peacefully in her bed, would Elizabeth have married Leicester? (I think probably not–she wasn’t really the “marrying kind,” and he went on to marry the Queen’s cousin, the very vivid Lettice Knollys and got into trouble for it. But that’s another story…)

Isn’t this the whole crux of the matter? You always want to know what really happened, but you never will. I mean you can speculate all you want. You can think it was suicide or murder or an accident, but you will never really know. At least not in life. I like to think in death there’s a room with a projector running 24/7 showing famous events in history that have mysteries about them. You can watch what really happened to the two princes in the tower. You will see if Oswald really acted alone. You will find out if there really was a Pope Joan. All the mysteries will be answered. Of course perhaps the fun in the mystery is that it’s a mystery and has human beings we love to speculate.

I think Dudley was too politically astute to have had Amy murdered. Esp if he had any affection for her, tho without doubt he was all about Robin and his ambitions. And I think he really loved Elizabeth (tho maybe he loved the power she represented even more.) Unquestionably, Cecil would have tried to surreptiously use the scandal to neutralize the influence of a man he saw as dangerous to Elizabeth and the throne.

BTW, have you created a neat little “historical events” calender somewhere? You always seem to know about these interesting anniversaries!

I can see why this mystery spawned lots of fiction and non-fiction books!

I haven’t a clue what really happened, but one would wonder why she sent the servants away. On the other hand, vaulting oneself down a stairway is not the most fail safe method of suicide. It would not have guaranteed her freedom from pain because she might just as easily lingered in agony with several broken bones and internal injuries.

Has anyone ever read Sad Cypress by Agatha Christie? It’s probably my favorite Christie story. In it Eleanor sends away her staff and makes lunch for Mary, the nurse and herself. This becomes key because Mary dies and Eleanor is blamed for murdering her. In reality Eleanor wanted to be alone because her fiance had left her for Mary and her aunt had just died. Perhaps Amy realized she had lost the love of her husband and she just wanted to be alone and an accident happened. I bet Hercule Poirot could solve it.

I love this idea!! I would definitely go see that movie in the afterlife. 🙂

A few old mysteries can eventually be solved, like the fact that Anna Anderson was not Grand Duchess Anastatia was proved with DNA (though it always seemed a highly unlikely story). Or the lost little Dauphin, who inspired so many pretenders, did actually die at the Temple Prison as a child (also proved with DNA). With Amy Dudley we can never know.

Julia, whenever I don’t know what to blog about (which is almost every week!), I type in “today in history” at Google and it pulls up a few good sites–there’s always bound to be something interesting on one of them. 🙂 Sometimes I just happen to know an interesting date–like this week I knew the birthday of Elizabeth I was September 7 and thought about doing something for that, but then research turned up this date for Amy Robsart’s death, which has always intrigued me.

Oh, and I forgot that on the recent Masterpiece Theater series “The Virgin Queen,” Amy (who is played by Emilia Fox, aka Georgiana Darcy from the ’95 P&P) wants to “save” her husband from himself and the wiles of the wicked queen, and thus crawls out of her sickbed and jumps from the top of the staircase. It’s very dramatic.

Also today in history: the coronation of William IV in 1831, the beginning of the September Massacres in Paris in 1792, and a slave revolt in Richmond, Virginia in 1800…

Fascinating post, Amanda. Thank you. I’m a total sucker for historical mysteries and when I was a teenager wrote a time travel story where I went back to witness the death of the Princes in the Tower. I think even then I was keen to exonerate Richard III. Must dig it out. It’s probably dreadful but it would be interesting to read it again!

I enjoyed Philipa Gregory’s book about Robert Dudley. She made him very attractive IMO. And yes, I’ve read Sad Cypress and enjoyed that very much too. It must be dreadful to be the only witness and be the suspect as well, and to know that even if you are innocent you’ll never be free of that taint of suspicion.

Interesting! I love unsolved mysteries of this kind.

Fascinating post. I am so glad I found this site and a few other historical authors’ sites. I love history and the mysteries that abound. Unfortunately, many will never be solved, but the speculation will keep people occupied for years.
Keep preparing these wonderful posts!

You have to wonder at her insistence at sending the servants away, but maybe she was just really thoughtful (no, my glass isn’t ALWAYS half-full).

I bet she just slipped and fell, perhaps not looking where she was going because her husband was a turd.