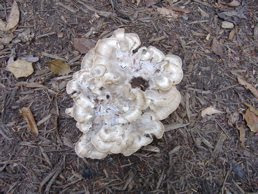 And here it is, a photo taken at great personal cost (at least two mosquito bites) of the latest growth in the back yard. I don’t know whether it’s edible and I doubt whether I’ll try to find out.

So with my brain in the backyard, my mind in 1797 Bath, my memory falling down a hill somewhere (I can’t remember where), and my bank balance on its way to the IRS … here’s what I’ve been up to.

I went on Tuesday to see Steeleye Span, an appearance on their 4oth anniversary tour. Eeek. The line for the men’s room was longer than that for the women’s room, probably because of all those dodgy prostates. I counted three people who didn’t qualify for AARP membership (one of whom was my daughter–this concert was a birthday present. My daughter and I did a guest interview recently at MamaWriters which was fun). Steeleye Span was one of the folk rock bands in England started, uh, forty years ago, their main contender being Fairport Convention (although band personnel switched between the two). 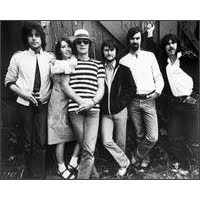 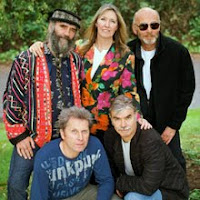 Going to see a band you’ve followed, on and off, for a few decades is rather alarming. It leads to all sorts of thoughts about mortality and aging, and a live performance is quite different from recordings which give you a studio (edited, pristine) moment in time.

I didn’t want any sort of nostalgia trip or mourning for my lost youth or any of that stuff but I felt time was running out. Would they sound as good?

Thankfully, yes, they sounded amazing. And, oh, the Regency tie in. Their repertoire contains a lot of eighteenth century material. One of their most recent recordings, Bloody Men, has a whole group of songs, Ned Ludd, which begins with a setting of Inclosure by John Clare (and I’m listening to it right now):

And the same album has a version of a wonderful, raunchy traditional song, Bonny Black Hare, which proves that yes, in Regency England, they Did That Sort of Thing:

I laid this girl down with her face to the sky
I pulled out my ramrod and my bullets likewise
Saying, Wrap your legs round me, dig in with your heels
For the closer we get, the better it feels

As I said, my brain appears to be in the backyard (and mind in the gutter), but where’s yours today? What music are you listening to?

I’ve been listening to Fairytale by Sarah Bareilles. My favorite line:
Screw it. You’re getting the whole thing:
Cinderella’s on her bedroom floor
She’s got a
Crush on the guy at the liquor store
Cause Mr. Charming don’t come home anymore
And she forgets why she came here
Sleeping Beauty’s in a foul mood
For shame she says
None for you dear prince, i’m tired today
I’d rather sleep my whole life away than have you keep me from dreaming

Snow White is doing dishes again cause
What else can you do
With seven itty-bitty men?
Sends them to bed and calls up a friend
Says will you meet me at midnight?
The tall blonde lets out a cry of despair says
Would have cut it myself if i knew men could climb hair
I’ll have to find another tower somewhere and keep away from the windows

I think it’s quite clever and I’m obsessed with fairy tales. I think I’ve mentioned this. Especially the Victorian rewrites of fairy tales. Double meaning in everything or now I think so because I’ve spent so many years in academia.

I have not, but just ordered it on amazon. Thanks.

Where’s all the commenters?

My husband and I went to a Gordon Lightfoot concert several years ago (so we were younger than now) and also noted the aging hippie generation in the audience (our age). But the real shock was when the band came out.
They were a bunch of old guys!!

And we’ve had that fungus among us, too.