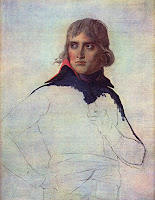 13th Vendémiaire An IV (look here to see how the French Revolutionists counted time)  or October 5 1795 was known as the Day of the Sections, an important day in Napoleon Bonaparte’s life.

Before Oct 5, Napoleon’s future did not look promising. He’d been imprisoned for a while after the coup d’état of 9 Thermidor, because he was a friend of Robespierre’s brother. After that he was unemployed and was thinking of leaving France.

But then rich Parisian royalists try to take over the National Convention by force and the Convention hires Compte de Barras to defend it. Barras enlists Napoleon’s help. 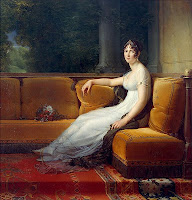 (He also passes on his mistress to Napoleon; the mistress eventually became his Empress Josephine). Napoleon drives the mob away with a “whiff of grapeshot,” killing about 200 (or 1400, as another site said) and successfully saving the Palace of the Tuileries.

Napoleon is rewarded with fame, wealth and the patronage of the Directory. He soon is appointed commander of the Army of Italy, thus beginning a long series of victorious campaigns. 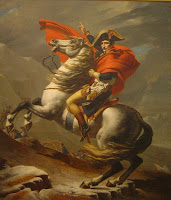 Five years after 13th Vendémiaire An  IV, Napoleon launches his own coup d’etat and makes himself First Consul of France.

I’m used to thinking of Napoleon as “the enemy,” but he really did a bunch of great things, besides winning battles:
1. Established the Code of Napoleon
2. Established a public school system
3. Reconciled with the Catholic Church
4. Created the Bank of France, stabilizing the currency

5. Restored the Gregorian Calendar and did away with the Revolutionists’ way of counting time

What else?
What’s your opinion of Napoleon?

I honestly haven’t read much about Napoleon (and no, I do not write Regencies… I just read them!) Everything I know about the Corsican tyrant, I learned from romance novels!

Hahahaha, Kate. I could almost say everything I know about Napoleon I learned from romance novels and from trying to think up a blog for Mondays!

I think I have several ideas of Napoleon. I’ve read his letters to Josephine and they are wonderful beautiful letters, but then I know he pushed Josephine aside for a younger bride that could give him an heir. There’s also the art thief. He stole the great treasures of the lands he conquered and now we have the Louvre. I love the movie Desiree starring Marlon Brando as Napoleon. I know there are inaccuracies in the film, but I do so wish it were true.

Hi Diane 🙂
Thank you for the great post!
I found it extremely interesting, entertaining & informative.
Thank you for a great way to start my Monday.
All the best,
RKCharron
xoxo

I’d also like to say that I sympathize with Josephine, but that’s mostly because of the Josephine trilogy by Sandra Gulland. It’s wonderfully done. If you haven’t read you must.

Yes! My sister-in-law has been urging me to read Sandra Gulland’s books for ages. The Josephine books are high on my TBB list.

Yes, Napoleon’s treatment of Josephine was shabby! I read a biography of her, but I forgot who wrote it.
And I’m not sure that killing 200 or 1500 Royalists was exactly admirable…let alone all the other stuff you listed, Jane Austen.

Thank you for an interesting article, both the information and the pictures. Napoleon is fascinating in so many fields of life. And i agree that he is extremely useful when writing Regency fiction.

Apparently he always read while on horseback. As he finished each page he would tear it out and throw it over his shoulder. Even his generals would join in the scuffle to pick up and treasure each page that had been read by their charismatic leader.

I once took a group of schoolchidren to see his private appartments in the Chateau of Fontainebleau. Afterwards one of them wrote that she had been to see Napoleon’s private parts….

He had some progressive ideas, but to me that doesn’t justify his indifference to the lives lost in his various campaigns.

The “Desiree” movie gets more right than you might think.

Napoleon did steal lots of the world’s treasures, but in the process, at least in Egypt, he gave us modern Egyptology and greatly influenced the rise of archeology as an important academic area of study.

He caused the widepsread usage of the metric system.

For good or ill, he modernized and greatly improved the use of artillery.

His war costs resulted in the necessity to raise money- leading to the Louisiana Purchase which created the continental United States.

He inadvertently and indirectly cause the War of 1812, which solidified the US as independent of Britain.

I could go on, and on, (thank you Professor Bonfils!) but suffice to say that the ripple effects of Napoleon’s time as leader of France continue to affect the world even 200 years later. He is probably one of the 2 or 3 top world leaders in the context of long-term impact.

Thank you, LadyDoc, and thanks to Professor Bonfils!

I cannot forget Benjamin Franklin’s quote from 1776: “Treason is a charge invented by winners as an excuse for hanging the losers.” I’ve always been glad I didn’t have to live during Napolean’s reign. Looking back at what was recorded, I cannot like the man. I wonder what I would have thought had I been living then in England or in France or Italy or even the USA. But I definitely have to wonder at what kind of man would inspire those closest to him to poison him.

I definitely second the rec of the Gulland books! They are terrific reads–I devoured all 3 of them back to back. (and I think Josephine is more interesting–and definitely more sympathetic–than NB!)

I recommend the book “Napoleon’s Women” by Christopher Hibbert and your post, Diane, has given me an idea for my post on Thursday (but I’m not telling).

I still think Napoleon would have been a lot of fun in bed. Not sophisticated, caring, solicitous etc. but for good dirty fun he has my vote.

Judy, one does wonder what we’d be thinking if Napoleon had won at Waterloo.
The latest thinking on Napoleon’s death, though, is that he died of stomach cancer.

Janet. You are just priceless. You ought to be a Master Card commercial. (and if I gave you a blog idea, you owe me one!)

Thanks, Diane! I did a quick search out of curiosity and found that though there was arsenic found in Napoleon’s hair that was tested, they think it may have been the wallpaper! Might have made him sick but the stomach cancer was the killer.

I read that, too, Judy. And that lots of people of the time period had arsenic in their hair.