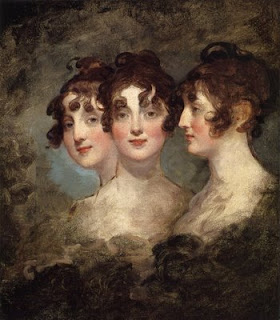 Blogger Madeleine Conway at That Reading/Writing Thing had some very nice things to say about A Most Lamentable Comedy, including this statement:

… her cast of secondary characters, however improbable, also have that unmistakeable air of coming from some research that amply demonstrates that old cliché about truth, fiction and strangeness.

Quite often here at the Riskies I like to explore the oddities of history that I’ve discovered and when Diane blogged earlier this week about Napoleon, I was inspired to dig into the scattered and messy files of my memory to write about Betsy Bonaparte (1785-1879), Baltimore girl who made good–for a time. She was a rich merchant’s daughter who married Bonaparte’s younger brother Jerome Bonaparte in 1803. 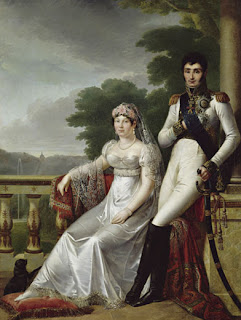 Big brother, who had his eyes on further conquest of Europe through his siblings’ significant marriages, was not amused and ordered Jerome back to France–without his blushing bride. Poor Betsy, pregnant and alone, took refuge in London where she gave birth to their son Jerome Napoleon Bonaparte aka Bo. Big brother Napoleon, not particularly bothered by such trifling matters as bigamy, married his troublesome younger brother off to a German princess, Catherina of Wurtemburg.

Betsy and baby Bo returned to Baltimore where she was notorious for her European connections and her fashion, which was a bit much by federal American standards. Rosalie Calvert, mistress of Riversdale House, Maryland, met Betsy Bonaparte in 1804 at a party hosted by Robert Smith, Jefferson’s secretary of the navy, and commented that she …was wearing a dress so transparent that you could see the color and shape of her thighs and more! Several ladies made a point of leaving the room and one informed the belle that if she did not change her manner of dressing, she would never be asked anywhere again.

Another guest gave a similar account: She [Madame Bonaparte] has made a great noise here, and mobs of boys have crowded round her splendid equipage to see what I hope will not often be seen in this country, an almost naked woman. An elegant and select party was given to her by Mrs. Robt. Smith; her appearance was such that it threw all the company into confusion and no one dared to look at her but by stealth.

Betsy was finally granted a pension by Napoleon, but never the title she wanted so much, and in 1815 a divorce by the state of Maryland , and set her hopes on Bo making a grand European marriage. Bo was not interested, becoming a lawyer and marrying a local heiress. Mama was not pleased.

It was impossible to bend my talents and my ambition to the obscure destiny of a Baltimore housekeeper, and it was absurd to attempt it after I had married the brother of an emperor. . . . When I first heard that my son could condescend to marry anyone in Baltimore, I nearly went mad. . . . I repeat, that I would have starved, died, rather than have married in Baltimore. . . .

In 1855, when the Bonapartes were again in power in France, Bo was offered the title of Duke of Sartene. He turned it down. Ironically, her widowed sister in law Marianne Patterson married Richard Wellesley, the older brother of the Duke of Wellington. Poor Betsy, surrounded by family members either turning down or effortlessly achieving the greatness she craved! 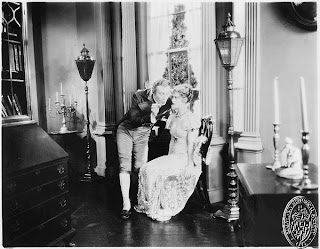 Betsy, disillusioned and alone (she never remarried) spent the rest of her life amassing money and at the time of her death, having outlived Bo by nine years, had an estate worth $1, 500,000. She’s buried in Greenmount Cemetery, Baltimore. Her life inspired a play, Glorious Betsy, by Rida Johnson Young, which was made into a movie in 1928 and again as Hearts Divided (1936).

What are your favorite examples of truth being stranger than fiction?

Wonderful post, Janet! Somehow I was under the impression that as soon as Napoleon found out that his brother had wed (and an American, yet!) and without his permission, he wanted to send his wife packing on the very next boat back to Baltimore.

As I researched Emma Hamilton for my historical novel TOO GREAT A LADY and the celebrated actress/royal mistress/courtesan/renowned author/feminist Mary Robinson for my novel ALL FOR LOVE, I was discovering that just about every key event of their lives was stranger than fiction. They knew every celebrity of the day, hobnobbed among royalty, each became the lover of a war hero; each woman came from a broken home and ended up an international celebrity … if you were to write about the contemporary equivalents of these 18th century female Zeligs, people might be hard pressed to believe the vertiginous rises and precipitous descents of their fortunes, as well as their stellar social connections.

That’s such a terrific story, Janet! I am instantly in love with Bo, who seems to have stayed true to himself in face of great pressure from Mommy.

I love the story of Elizabeth Patterson Bonaparte, Janet. I wrote about her when I did Napoleon week. I’ve also found it interesting that her grandson founded the Bureau of Investigation.

I think the tale of Llewellyn and his bride Elen is very interesting. Elen lived in France because her father was killed for rising up against Edward I. Llewellyn was looking for a bride and chose her. They were married by proxy in France and then Elen was to go to Wales. Edward I had other plans and had Elen kidnapped by pirates and held hostage until Llewellyn agreed to terms set by Edward I. Llewellyn and Elen actually grew to love each other. Sadly Elen died in childbirth. It was a girl although she was told it was a boy so she had given Llewellyn an heir. Llewellyn was murdered and beheaded by Edward I’s minions and thus Wales fell into the hands of the British. His daughter was taken to a convent and lived out her days in solitude.

Great post, Janet! I actually once saw the dress rumored to be Betsy’s wedding gown, in an exhibit at the Costume Institute. White on white embroidered muslin, very lovely (and in amazing condition!)

I’m with Diane. A hero inspired by Bo’s story would make for a great romance. But one probably couldn’t sell it. Just like Betsy, we Americans are fascinated with the titled aristocracy.

Fabulous bit of history Janet, thank you for sharing. Bo sounds like a good guy, and I would read his story in a hot minute. I snagged “A Most Lamentable Comedy” from BookDepository and LOVED it. It was like a breath of fresh air amid my slightly dusty historical favorites.

“…no one dared to look at her but by stealth.”

This evokes such a fabulous image!