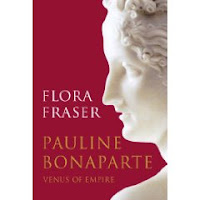 And one more quote came through this week, too, I am so excited! (Can you tell I’m living on tea and chocolate? The caffeine/deadline diet!)

As for today’s blog, I recently read Flora Fraser’s fascinating new biography Pauline Bonaparte: Venus of Empire. What a naughty woman that Pauline was! She might have to reform a bit to make a good romance novel heroine (and a story of that reform would be lots of fun to read…). And I found out today is her birthday–October 20, 1780.

Pauline was born in Ajaccio, Corsica to Marie-Letizia and Carlo Bonaparte, the third youngest of their many children. She received almost no formal education, and her young life was abruptly disrupted when she was 13 and had to flee with her family to the French mainland. She was a famous beauty even before she was 16, attracting legions of admirers (much to her strict mother’s dismay!). Around this time she fell passionately in love with a man named Stanislas Feron, a brave solider in her brother’s army but also a 40-year-old, syphilitic philanderer who never did much in his life. She ended up marrying Colonel Victor Emmanuel Leclerc on June 14, 1797 at Napoleon’s command (he had caught them in a compromising position, natch!). Young marriage proved no impediment to Pauline’s affaires.

In 1801, Leclerc was given command of the army in Haiti, where Pauline and their young son Dermide (who died at the age of 8) went to join him. Leclerc died of fever there in 1802, and Pauline hotfooted it back to Paris soon after. She married again within 8 months, in August 1803. Prince Camillo Borghese was one of the richest men in all of Italy, but money couldn’t keep Pauline at home (though she did love spending it!). The prince tried putting her under house arrest; that didn’t work, either. She shopped, gave big parties, had love affairs, and posed famously nude for the sculptor Canova. Her brother gifted her with the duchy of Guantalla, which she promptly sold to Parma for 6 million francs (but kept the title Princess of Guantalla), thus demonstrating a distinct lack of interest in ruling anything but herself. 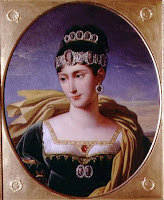 When her brother was exiled to Elba, however, she liquidated her assets (including a wide array of jewels) and went to stay with him, the only sibling to even visit him. After his escape and final defeat, Pauline went to stay with her mother in Italy. When she tried to move back into the Palazzo Borghese, her estranged husband ended the marriage and she bought her own lavish estate near Rome. By this time she was suffering from ill health, though she tried to maintain her lavish lifestyle of lovers and parties until she died in 1825, age only 44, of cancer. She had become reconciled with Borghese near the end, and he allowed her to be buried in the family chapel among popes and saints (ha!)

Who are some of your favorite “bad girls” in history? Do you enjoy novels with naughty heroines? (I do!!)

And on Thursday I’ll be at the Pink Heart Society blog talking about favorite childhood reads and The Winter Queen! Be sure to pop in and see me there…

Pauline sounds like a perfect romantic heroine (tho the writer would have to fudge the ending a bit.) Scarlet O’Hara who really goes through with the love affair and ends up with big bucks in Rome instead of Atlanta. Write it, please!

Good luck on finishing on deadline. Can’t wait to read both series!

I love this post- Fantastic! I can think of a couple of other such love-hate agitators: Catherine de Medici and Lucrezia Borgia (Some Italian ladies sure knew how to rev things up). Thanks:)

I was fortunate enough not only to review this book but also I had the chance to meet Flora Fraser when she was here in NY on her book tour. Pauline is one of my favorite bad girls, along with Madame de Montespan, and Lola Montez.

I really like to read about courtesans, but at the moment I am at a loss to think of any of their names. I think if Pauline got a story what I would like to see is not her as the heroine, but her as the heroine’s older wiser friend, who is instructing her young friend on how to go about snagging a rich husband so she too can live a life of leisure.

What a piece of work Pauline was! I read Fraser’s fascinating bio, too, for my research on ROYAL PAINS, my nonfiction wip.

Do you think she slept with her brother?

I love reading (and writing) about courtesans who were oh-so-much more than that, having featured Emma Hamilton and Mary Robinson as the protagonists in 2 of my novels.

She sounds quite interesting. . . never knew anything about her except a)her name and b) I have a jpg of that top picture on my computer. So, yep, learned a’plenty today. 🙂

LOL! I do have an idea about a bad-girl heroine trying to reform, and not doing a very good job of it (thanks to the hero). It’s in my idea queu…

Ms. Lucy, you are definitely right about Italian ladies! I also love Lucrezia’s and Catherine’s stories, as well as the French courtesans.

“Do you think she slept with her brother?”

‘Snort!’ I did think that was some interesting speculation (and really, she probably wouldn’t have balked at such a thing!) but the evidence was pretty flimsy. Must read more about her life.

Good luck in the final countdown. I like bad girls, sometimes, but I find it hard to relate to them because I’m such a wimp.

I like bad girls, too — my fave being Nell Gwyn, who wasn’t really all that bad as bad girls go… but it seems she was fun-loving and an interesting person to know.

Good luck on the deadline…

It’s the Scarlet O’Hara symdrome, isn’t it? Bad heroines we love. This makes me think of Georgiana, Duchess of Devonshire though Keira Knightley made her very sympathetic in The Duchess.

Thanks for your review of Pauline’s bio. I’ll add it to my TBR pile 🙂

I love Nell Gywnn, too, Barbara! She seems more naughty and fun-loving than “bad”, I think. 🙂

wow. I knew nothing about Pauline.

The one time I was in Rome, I stayed in a renovated villa right across from Borghese Gardens. It was renovated for US State Dept families and the couple I stayed with had one floor. It was so big if you opened the front door and yelled, no one would hear you in the kitchen.

Pauline probably would have thought it was a shack!

I’m so excited for this book to come out. What is the exact release date? I’m hoping it’ll be avaible in my Target, too, so that’ll sell more books.

A little bit of the bad girl in the heroine can spice things up, however, I think she could be too bad. I’ll have to read this book to see if she has crossed over the line.
I guess the line not to cross is from bad as in naughty to bad as in evil. Can’t have an evil heroine, can we?

“Can’t have an evil heroine, can we?”

Keira, do you mean my book or the Pauline bio? The bio is already out; my book is out November. Our Targets don’t carry the Harlequin Historicals at all. 🙁