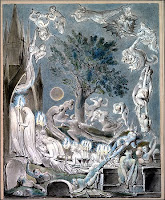 Here is a tale from:

It is the tale of Lord Lyttleton. Not the “great and good” Lord Lyttleton, but his “witty and profligate” son, who in 1778 (a little before the Regency- I exaggerated) “retired from the metropolis, with a party of his loose and dissapated companions” to his country house, Pit Place, near Epsom in Surrey.
One day his friends noticed that Lord Lyttleton’s mood had turned depressed, putting a damper on their debauchery. At their urging he finally told them what had altered his mood.

Two nights before, on his retiring to his bed, after his servant was dismissed and his light extinguished, he had heard a noise resembling the fluttering of a dove at his chamber window. This attracted his attention to the spot; when, looking in the direction of the sound, he saw the figure of an unhappy female, whom he had seduced and deserted, and who, when deserted, had put a violent end to her own existence, standing in the aperture of the window from which the fluttering sound had proceeded. The form approached the foot of the bed:—the room was preternaturally light; the objects of the chamber were distinctly visible:—raising her hand, and pointing to a dial which stood on the mantelpiece of the chimney, the figure, with a severe solemnity of voice and manner, announced to the appalled and conscience-stricken man that, at that very hour, on the third day after the visitation, his life and his sins would be concluded, and nothing but their punishment remain, if he availed himself not of the warning to repentance which he had received. The eye of Lord Lyttelton glanced upon the dial; the hand was on the stroke of twelve:—again the apartment was involved in total darkness:—the warning spirit disappeared, and bore away at her departure all the lightness of heart and buoyancy of spirit, ready flow of wit, and vivacity of manner, which had formerly been the pride and ornament of the unhappy being to whom she had delivered her tremendous summons.

Lyttleton’s friends laughed at his superstition and tried to cajole him into believing he’d merely had a bad dream. Later when he retired to his room, they had a brilliant idea. They turned all the clocks ahead an hour and kept Lyttleton busy enough that he did not notice.

When eleven o’clock on the appointed day came, Lyttleton again became depressed, fearing his death, but soon enough the clocks all struck twelve. “Thank God, I’m safe,” exclaimed Lord Lyttelton. He and his friends celebrated with a lot of wine. He retired to bed and his friends waited out the hour for twelve midnight designated by the vision. Lyttleton’s bell rang violently as the clocks struck one. The men ran up to the room and found their friend. Lyttleton “lay extended on the bed before them, pale and lifeless, and his countenance terrible convulsed.”

Two years later Lyttleton’s stepmother painted the scene of the apparition appearing to him. The painting hung in her drawing room and showed the dove in the window and the female figure in white.

Do you have any Regency ghost stories?
What’s your favorite ghost story?

Heh. This was a good one. No stories from me from RL, THANK GOD!

Hmm. Well, I’m reading The Mysteries of Udolpho, which was pub’d not long before the Regency, and it seems to have a ghost or two. Since I only read a page a day max, it’s taking a good while, so maybe this time next year I’ll know whether it’s really ghosts or just Emily’s vivid imagination.

I love Moaning Myrtle in the Harry Potter books.

I don’t have a Regency ghost story, but a ghost story. When I was 8 my grandmother died and as I was in her house getting ready for her funeral i was asked to go get something upstairs in the train room. I did and when I opened the door I saw my grandmother in a white dress with green frogs. I screamed and slammed the door and vowed never to go upstairs again.

Ten years later my aunt got remarried and traveled east so we could meet her new husband. Anne, Marcie and I (my grandmother’s two daughters and thus my aunts) were sitting at the dining room table. Anne said the day Mimi died Anne had woken up thinking it was a good day for her mother to die. (She was very sick, TB or consumption). Anne saw my grandmother that day in a white dress with frogs on it.

On the day of the funeral, which was in February, my two aunts went out to the cemetery. They hugged with Anne facing the tombstone and Marcie away. Anne saw Mimi who gave her an everything will be okay look and walked away into the mist.

Marcie admitted that night at the dining room, ten years after Mimi’s death, that she had asked her mother if she could come back if she would. Mimi had replied if she came back to anyone it would be Rachel (me) and Anne because we needed her most.

So what my parents thought was an eight-year-old’s imagination turned into something much more spiritual ten years later and still gives me chills to this day.

I didn’t see my mother after she died but I know she visited me. I was alone late at night and all of a sudden the TV changed channels and the cats got spooked.

Barbara, I intend to read The Mysteries of Udolpho someday….

Waving madly to Keira! Surely you must have some ghost stories!

Waving madly back. Oh no! I don’t ever want any ghostly events occuring in my life. I’m a ‘fraidy cat.

What a great story, Diane! And how timely.

My only claim is that I’ve heard the dogs after they pass away. A claw catching on the carpet or ears flapping from shaking a head or a “huff.”

Judy, It is sorta nice to know our pets live on.

Judy, I think I saw one of my cats after she passed away a few years ago. I like to think she visits once in a while!

I have a post coming tomorrow about ghosts of the Tower, but it took me a while to decide on which British ghosts to write about! That country is just chock-full of creepy apparitions! (plus it seems like every house in the place is haunted by Mary Queen of Scots–she really gets around) 🙂

Aaaaah! Your question has reminded me of a book that scared the pants off me when I was little.
Alfred Hitchcock’s Ghostly Gallery, eleven spooky stories for young people.
Must now go to Amazon…

Great ghost story O Divine One! I’ve told the story of my youngest brother’s imaginary friend who turned out to be a ghost haunting the house we lived in in England.

There have been times I have felt a brush high on my leg and smelled the scent of my late Great Dane, Glory. There are times my cat, Rebecca, will sit on the bed and stare at the same spot for over an hour. Glory raised Rebecca and often carried her around in her mouth when she was a kitten. Glory’s leash and collar still hang on the leash rack by the door and Rebecca will often walk by and rub against it.

The old church in the village where we lived had a stellar graveyard for ghost stories. The church is late 11th century. The local kids told us that if you walk around the church counterclockwise 13 times on the 13th time you will see the ghost of a Norman knight. We were pretty sure it was a “scare the Yanks” story, but my brothers and I were quite adventurous. Oh and you had to do it after dark! We did it and I don’t know what we saw, but it scared us and the British kids out of the graveyard, down the hill, down the street and back home as fast as our little kid legs would carry us!

Sorry,no Regency ghost stories. We do live in a house with ghosts and a ghost hunting team has said the place where I work has 16 of them. Like to hear other people’s stories.

Oooh, librarypat! How exciting….and scary. Do you work in a library? I like the idea of library ghosts!