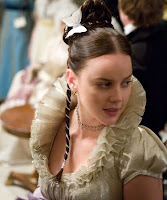 Deadline Status: Done! (Almost–the writing-writing is done, now I’m hammering it into some kind of coherent shape. Lucky for me my editor is on vacation until the 3rd…)

Movie Status: Good! I saw two excellent movies in the last couple of weeks, which is much higher than average for me. After Diane’s review, I had to go see Bright Star, which was beautiful. (I must have a ballgown with a standing ruffled collar! I did a little post about the movie on my own blog, too). And I went with a friend who writes reviews to see a preview of An Education, starring Carey Mulligan who was so great in Bleak House and Northanger Abbey. This was the best movie I have seen all year. I predict both movies will see Best Actress noms when the Oscars come around (and probably Best Costumes, too!) 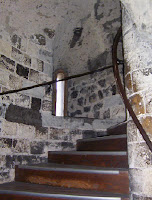 And in honor of Halloween, my subject for this post are the ghosts of the Tower of London! Needless to say, there’s no shortage of haunted places in England to talk about (see info on Borley Rectory, the “most haunted place in England” here, and info on London ghosts here), but when I went to the Tower last year there was such a sad, melancholy feeling about the place. I suppose that’s inevitable for a spot so old (over 900 years) and so full of sad, tragic stories. Here are just a few of the tales (which the Beefeater guides are happy to expound on at length!): 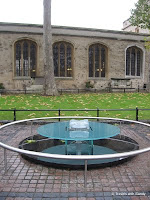 The first reported sighting of a ghost at the Tower was, surprisingly, Thomas a Becket (who was killed far away at Canterbury and, as far as I know, was never imprisoned at the Tower!). During the construction of the Inner Curtain wall, it’s said Becket was angry about the construction and appeared to reduce the wall to rubble with his cross. It was the grandfather of Henry III, who had ordered the wall built, who was responsible for Becket’s murder, so maybe that was his problem? Who knows. But Henry ordered a chapel built at the Tower and named it after Becket, and there were no more problems from the Archbishop.

The Bloody Tower (possibly the most obvious building name in all England!) was the scene of the disappearance of the Two Princes, Edward V (age 12) and his brother Richard, Duke of York (age 10) who are thought to have been murdered in 1483 (possibly on the orders of their uncle, the Duke of Gloucestershire, later Richard III). Late in the 15th century, two guards passing the Bloody Tower saw two small figures gliding down a staircase clad in the nightshirts they had on the night they were last seen, holding hands. They faded into the stones. These apparitions are still sometimes seen.

The most commonly seen ghost is Anne Boleyn, beheaded at the Tower in 1536. She’s seen in the Queen’s House, where she stayed before her death (probably the most haunted spot in the whole place; along with Anne, Jane Grey, Catherine Howard, and Arbella Stewart hang around there, too). In 1864, a guard saw her float out of the Queen’s House, and charged at her with his bayonet only to have it go right through her before she disappeared. He fainted, and was court-martialled for dereliction of duty. Luckily, 2 others saw what happened and he was acquitted. Anne can sometimes be seen gliding across the execution spot, or leading a procession down the aisle of the Chapel of St. Peter ad Vincula, ending at her resting place under the altar. I did not see her, though I wouldn’t have minded if she wanted to show herself to me!

Lady Jane Grey, who was 17 when she was executed at the Tower (after being queen for 9 days), is often seen as “a white shape, forming itself on the battlements.” She was reportedly last seen in 1957, though, so maybe she has moved on. Her husband, the unfortunate Guildford Dudley, is sometimes seen weeping in Beauchamp Tower. Catherine Howard is said to scream in her old room at the Queen’s House (though how they know it’s her screaming and not some other poor spirit, I don’t know)

One of the worst stories of the Tower is that of the Countess of Salisbury, Margaret Pole, friend of Katherine of Aragon and one of the last of the Plantagenets. When she was in her 70s, her son Cardinal Pole (who was safe in Rome, and would later be Queen Mary’s chief advisor) started mouthing off against Henry VIII. In retaliation Henry brought Lady Salisbury to the block. The feisty elderly Margaret refused to put her head on the block like a common traitor, and the inexperienced, flummoxed executioner chased her around the scaffold, hacking at her until she was dead. It’s said every day on the anniversary of her death this gruesome, ghostly scene is reenacted.

At one time, the Tower also housed the Royal Menagerie (lions, leopards, bears, monkeys, etc). One night in January of 1815 a sentry saw a giant bear emerge from a doorway. He lunged at it with his bayonet, which passed right through the (understandably) enraged ghost bear. The sentry passed out with fright, and later died of the shock. 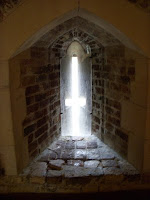 The Salt Tower is one of the oldest and most haunted spots in the Tower. It’s said dogs won’t enter there, and neither will the guards at night, after one was nearly throttled to death by an unseen force. There are also reported sightings of phantom funeral carriages, and “a lovely veiled lady that upon closer look proves to have a void where her face should be.”

Happy Halloween, everyone! This is my favorite holiday. What are you going to do to celebrate? What’s your costume? (I may get a blond wig and pull out a cocktail dress and call it Betty Draper…)

And be sure and join us this weekend as I launch my Elizabethan Christmas book, The Winter Queen! (The Tower makes a brief appearance, but no ghosts). Megan will interview me about the book, I’ll have a post about Christmas traditions of yore, and there will be a book giveaway…

Hi. I love stories about ghosts and these are very interesting. So London and particularly Tower of London are added to my must see list. Well, my costume this year will be a ghost costume. For me it’s kind of tradition to wear home made ghost costumes. The only problem is to make it each year original. But now I have inspiration.

I had forgotten that, the melancholy feeling of the place. I visited the Tower years ago. What I recount most often about my visit was the Beefeater’s information that it took 200 years to build and my thought that my country was only a little older.

I’ve not visited the Tower, but I have my costume all planned. I’m going as one of my favorite TV shows, What Not To Wear. I’m going to be doing all the things Stacie and Clinton chide their guests about. Maybe I’ll take a photo.

I’ve visited the Tower, but didn’t really feel melancholy while there. I have a picture of me on my desk standing by the window where Gruffyd ap Llewelyn died after trying to escape by tying sheets together and climbing out the window (true story….the sheets didn’t hold and he fell to his death). I actually goofed around a lot at the Tower. I have a picture of me looking quite worried and holding my neck at Traitor’s Gate. I have a picture of me looking very sad as I get dragged into the Bloody Tower. I have pictures of me in positions that torture devices would put me in with the torture devices in the background. Oh well. I guess I just laugh in the face of death and grisly horror.

For Halloween I will be da Vinci’s Lady With An Ermine. I normally dress up like a famous painting.

LOL, Diane! I definitely want to see a pic of that. 🙂 Do you have a sequined holiday sweater? Crocs?

Hmmm, maybe a Dancing With the Stars costume would be fun? 🙂

Woah, I want to see Diane in a Dancing With the Stars costume! (about a foot of material should do it.)

Ammanda, so glad you’ve gotten the Blood-Letting First Draft done! I find it soooo much easier to change happy to glad and move ch 2 to ch 3 and ch 1 to the prologue than get all the words down in the first place. I celebrate the end of the draft more than the polished version that comes later.

Thanks for all the ghost stories. I’m currently reading Diane Haeger’s The Queen’s Mistake about Catherine Howard, so the dead queen images are particularly powerful. It’s getting me “warmed up” for your soon-to-be-released Elizabethan story!

I’ll be working this Halloween, but just the mid-day hours. We do a Trick For Treat for Books every year at our library. The staff dresses, some teen volunteers,join us, and we let the kids choose a book from the caldron. Tomorrow i need to finish rounding up the books for the giveaway. I made a caftan of black spiderweb flocked material a few years ago. I’ll wear that with my spider jewelry. Think I’ll forget the wig and the extreme make-up this year. We will be going to church after work.