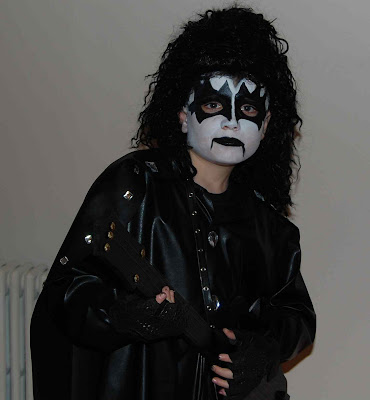 Now, this morning I thought I might write about the insights I gleaned at last week’s New Jersey RWA Conference; or, I thought, maybe I’d talk about reading the third book in a trilogy that had a huge build-up of a relationship without a satisfying resolution (they got together, I think, but I didn’t get to read about the whole event. Ahem. I like reading about events). 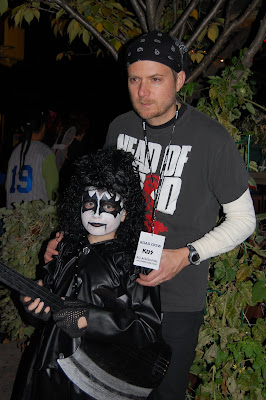 But then I thought boring and decided to talk about Halloween! I love the holiday; our house is decorated with skulls, black velvet, mirrors, pumpkins and spiders. My son has a distinct flair for picking Halloween costumes. Last year he was Gene Simmons (that’s him in the pic; the second pic includes my husband, who dressed as a roadie) and this year, he decided he would be a . . . giant eyeball. My mother-in-law is a costuming genius (she made the Simmons outfit, I did the make-up), and this year, she has outdone herself. This pic below is the inspiration for his costume; there’s a very obscure musical collective called the Residents who perform in these outfits and have never shown their faces. And can I say? His costume looks almost exactly like these guys. I’ll post pix at my own spot next week. 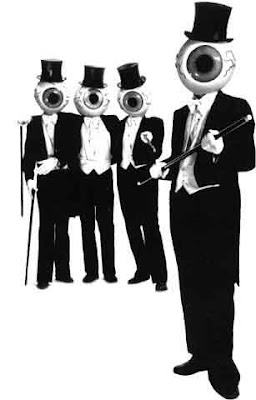 My only issue with these costumes is that it looks like we’re trying to be those lame pushing their kids into coolness parents. And we’re not! He thought of these by himself, we had no input; can we help it if he is cool on his own?

So Happy Halloween, everyone! Some burning questions: Do you still dress up? What’s your most and least favorite Halloween candy? What are your kids going as for Halloween? What was your favorite costume when you were growing up?

No dressing up for me or the kids this year too old though I may get festive and put on a Halloween tee or a halo for giving out candy. I love Almond Joys and Snickers also Smarties. So good! You son picks the coolest costumes.

Those are some awesome costumes! My favorite costume as a child was a fairy princess. When we lived in England we didn’t go trick or treating in the village of course, but they had trick or treating at the base housing complex. My folks took us there and as many of our school friends were officers’ kids and lived on base we had a ball. One year I went as a headless horsewoman and the two English ladies next door dressed me up as an English horsewoman complete with riding habit, boots and top hat with a scarf on the head under my arm. They giggled like little girls about it and they were well into their sixties.

Your son has awesome costumes, Megan! (and the headless horsewoman sounds awesome, too! How did you do the head??)

This is also my fave holiday! Spooky things and dressing up, what could be better? 🙂 My dogs usually have costumes, though the Pug doesn’t like them so she just has a jacket this year. The Poodle is a little French maid. I was going to go to a friend’s party tomorrow as Betty Draper, but I think it will be too cold for a cocktail dress so I am not sure…

I think I dressed up as a Christmas Tree one year, and as a dancing jukebox the next year. Your 11-year-old WANTS to wear a tuxedo? Too cute. Suggestion: Dress him up in the suit for New Year’s also…

Amanda, you have to remember this was the late 60’s and ladies wore wigs like women now wear hats. My Mom had a couple of styrofoam heads for her wigs. We made the head’s face up with a combination of paint and makeup and fitted her with a wig under her lovely top hat. And as the habit was a bit big for me, (It belonged to one of the ladies. They both rode to the hounds well into their eighties.)we pulled it up over my head and fastened it so it looked as if I had no head. I know there are photos of me in that costume somewhere. It really was one of my favorites!

What a cool son! And I’m proud that you and dh do not impose your coolness on your son.

My favorite costumes for my kids was the Snow White costume my mother made for my daughter when she was 3, and the yellow slicker, rubber rain boots, and fireman hat my son wore at about the same age!

I’m going to a Halloween party and I’m NOT dressing in my Regency dress. I’m going as WHAT NOT TO WEAR.

Great costume and makeup. Yes I still dress up. I’m a children’s librarian and never miss an opportunity to wear something different. Last year I made a caftan from a fabric with flocked spiderwebs on it. I wear a black sheath under it. I have some nice spider jewelry to complement the outfit. I wore a wig and white makeup last year, but will go with my grey hair and toned down makeup this year. We will be going to church after work.
Have a great Halloween.