Today, Amanda launches her newest book, The Winter Queen (November ’09, Harlequin Historicals) with the help of interviewer Megan! Comment for a chance to win a signed copy, and be sure and visit Amanda’s website for more behind-the-book info… 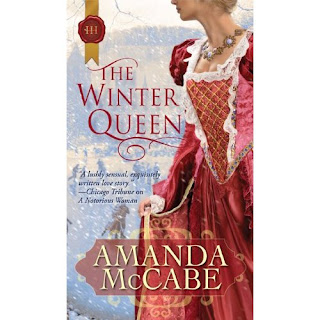 As Queen Elizabeth’s lady-in-waiting, innocent
Lady Rosamund is unprepared for the temptations
of Court. She is swept up in the festivities of the
Yuletide season and, as seduction perfumes the air,
Rosamund is drawn to darkly enticing Anton Gustavson…

Seduced By A Master!
With the coming of the glittering Frost Fair,
they are tangled in a web of forbidden desire and
dangerous secrets. For in this time of desperate
plots and intrigues, Anton is more than just a
handsome suitor–he may have endangered the life
of the woman he is learning to love…

“A delightful holiday gift of romance and intrigue! McCabe mixes in historical fact with fiction to create a fascinating page-turner of a novel” –Fresh Fiction Reviews

Megan: First off, let me say I am absolutely blown away by your skillful interweaving of history and romance. The Winter Queen reminds me of those books I read when I was young, the ones that taught me history even as I oohed and aahed over the love story. Bravo! Next, it might be like asking which of your children (or in your case, dogs) are your favorite, but which period is your favorite to write in? What joy do you find in writing Elizabethan? 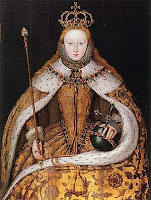 Amanda: As anyone who reads RR knows, I am a history junkie! Regency is my oldest love (thanks to all those Heyers and Regencies by Marion Chesney, Joan Smith, etc I read as a kid), but I also love the Restoration, the Italian Renaissance, and 18th century France. The Elizabethan era has a special place in my heart, since Elizabethan poetry was my specialty in school (very useful in the job market, too!). It’s an era full of such unbelivable raw, bawdy energy and high emotion, more so than any other I’ve found. England was expanding as never before, becoming a real player on the world stage, sending explorers such as Drake and Hawkins around the globe on voyages of exploration. It was also a great time for the arts, maybe THE greatest time in literature and theater (though music and painting were no slouches, either). Poets and writers who would have been giants in another, less crowded time were overshadowed by the “3 S’s” (Shakespeare, Sidney, Spenser), and almost everyone was “into” theater and poetry.

It was also a good time for women, and not just because the country was ruled by a woman. Much like salon society in 18th century France, women, while technically powerless, wielded a lot of influence “behind the scenes.” (On my own blog, each Heroine of the Weekend for November is going to be a fascinating Elizabethan woman–Lettice Knollys, her daughter Penelope Rich, the Countess of Pembroke, and Amelia Lanyer). Plus the clothes are great, especially in the time of TWQ (1564), before high Elizabethan nonsense like drum farthingales and wagon-wheel size ruffs took over! It’s just a very sexy, energetic, exciting period. And obviously I get very carried-away talking about it!

Megan: Your story is very Christmas-specific. What fun facts did you learn about the Elizabethan celebration in doing your research?

Amanda: If anyone knew how to party at Christmas, it was the Elizabethans! I’ll have a longer post tomorrow on some of the celebration traditions, but for the 12 Days of Christmas there were endless celebration. Banquets, masquerades, dances, plays, fox hunts, lavish gift-giving (the courtiers all tried to outdo each other with fancy presents to the Queen, of which detailed inventories still exist!). There was also a great deal of general, and probably drunken, silliness. One popular holiday game was called Snapdragon, which involved a bow of raisins covered with brandy and set alight. The players had to pull out the raisins and eat them without burning themselves. (We won’t be doing this around my house for the holidays…)

There are several good sources for the parties and holidays of the period, including Maria Hubert’s Christmas in Shakespeare’s England; Alison Sim’s Food and Feast in Tudor England; and Hugh Douglas’s Right Royal Christmas.

Megan: What made you cast a Swede–and a dark-haired one at that–as the hero?

Amanda: Well, he had a very unusual inspiration–Dancing With the Stars! I always knew my love of that show’s ridonkulous costumes and hilariously inappropriate music would be useful someday. A few seasons ago the winner of the mirror ball trophy was Olympic speed skater Apolo Anton Ohno. I had really liked him in the Olympics, but on DWTS he was so cute and charming, and also so fiercely determined to win that fugly trophy. I couldn’t figure out how to get a skating hero into an historical romance, until someone said, “Maybe he could be Dutch or something? Didn’t they skate?”

That’s when I remembered two things: 1) The winter of 1564, when Queen Elizabeth had been on the throne for 6 years, was the coldest in memory. The Thames froze through, and at Christmas there was a Frost Fair on the river, complete with booths for food and merchandise, sledding–and skating! 2) In this time period, every eligible bachelor in Europe was after Elizabeth’s hand in marriage, including King Eric of Sweden (who later went insane and was deposed by his brother, but that’s another story…) He sent delegations to London to woo Elizabeth. And Swedes skate, right? So Anton Gustavson was born. (And since he was half-English, he has dark hair. I didn’t know Alexander Skarsgaard then…) Anton is also a soldier, a spy, and a man with secrets.

Megan: The heroine, Rosamund, is a lady-in-waiting to the Queen. Would you have wanted this job?

Amanda: No way! From everything I read, Elizabeth was very strict employer with a fiery, uncertain temper. (She regularly threw things at her ladies if she was impatient, and used her fearsomely witty tongue to make fun of them). If one of her ladies dared to fall in love or want to get married, they usually found themselves in trouble (The queen’s cousin, Katherine Grey, even went to the Tower for secretly marrying!).

On the other hand, positions at Court were really the only way ladies of the upper classes could wield a measure of influence or make any money of their own (the stipends were not much, but bribes from those who wanted the ear of the Queen were always possible, and they often had gifts of cast-off, very valuable clothing and furnishings). There was travel and exotic visitors from other countries. And the Court was the center of everything–culture, power, gossip, etc. (Plus, again, the clothes…) (A good source for the life of the Queen’s ladies is Anne Somerset’s Ladies in Waiting: From the Tudors to the Present Day)

Megan: Who would you cast as Rosamund and Anton? 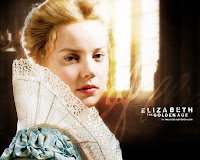 Amanda: Well, we already talked about Anton! I kind of pictured Rosamund as looking like Abbie Cornish in Elizabeth: The Golden Age (a big, dull snooze of a movie, but beautiful costumes!)

Megan: Do you know how to skate? What would you have wanted to do at the Frost Fair?

Amanda: I’ve tried ice-skating, but more often than not end up on my backside on the ice! Plus it’s cold. If any hunky Swedes wanted to teach me, though…

I think I’d like to have some hot apple cider to drink, ride in a sleigh, and buy some satin ribbons! All things Rosamund gets to do.

Megan: And what are you working on now?

Amanda: I just finished writing my second Laurel McKee book for Grand Central Publishing! Its title is Duchess of Sin, the sequel to the February ’10 release Countess of Scandal, and it will be out next December. (It also features Christmas, though this time in Ireland 1799). Now I have to dive into the next Harlequin book, a Regency spin-off from the Diamonds of Welbourne Manor anthology, and start researching an Elizabethan theater book where we move into seamier environs than the royal Court.

Megan: In your writing, do you feel like you’re taking risks? How?

Amanda: I don’t feel like I’m being “risky,” though I guess by stepping into a lesser-used time period (for romances, anyway–historical fiction is chock-full of Tudors!) that is a bit risky. I also like characters who are a bit out of the ordinary, both as a writer and a reader. And I’m currently working on a proposal for a book set in World War II Paris, possibly the riskiest thing I have yet attempted! đź™‚ 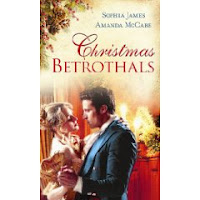 BTW, TWQ is available in the UK in a two-in-one called Christmas Betrothals (along with Sophia James’s Mistletoe Magic).

And I have another “Undone” short story coming out in December called The Maid’s Lover, which is connected to The Winter Queen! We get to see what’s really going on with Rosamund’s friend Anne Percy and her suitor Lord Langley (hint: it involves nookie in the snow, and maybe a little light bondage, LOL!). I just got the cover and I love her purple velvet gown…

The book is now available at eHarlequin.com, and my mother reports it was on the shelf at Wal Mart yesterday!