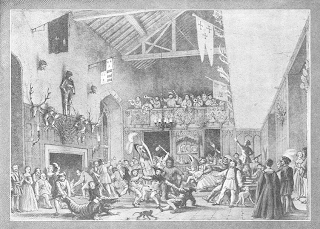 “They do both provide, against Christmas do come,
To welcome their neighbors, good cheer to have some.
Good bread and good drink, a good fire in the hall,
Brawn, pudding, and souse, and good mustard withal.
Beef, mutton, and pork, and good pies of the best,
Pig, veal, goose, and capon, and turkey well drest,
Cheese, apples and nuts, and good carols to hear!”
–Thomas Tusser, “500 Points of Husbandry” (1573)
I loved researching Elizabethan Christmas traditions, because it just sounded like such a fun time! They really knew how to party, those Tudors. We might have Christmas decorations in the stores from Halloween on, but they celebrated the 12 Days of Christmas, from Christmas Eve on December 24 to Twelfth Day on January 6, and each day was filled with feasting, dancing, plays, fox hunts, gift-giving, and general silliness. 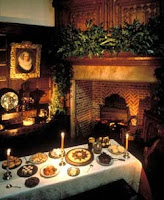 Many of the trappings of the holiday we would definitely recognize from our own deck-the-hallsing. Anything that was still green was used in copious amounts, such as holly, ivy, yew, and bay (hence the rhyme “Holly and ivy, box and bay, put in the house for Christmas day!”). The wreaths and swags would be tied up with ribbons and hung around the house, with the Yule log kicking things off on Christmas Eve. The men of the house would trek out into the woods to find the largest log possible and it would be paraded into the Great Hall, decorated with wreaths and ribbons. A bit of last year’s log was always saved to light the new one, and it was a tradition to sit around the fire and tell tales of Christmases past on that night. 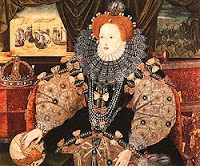 We would also recognize the food! (Though maybe not all of it–how many of us have roasted peacock, redressed in its skin and feathers, on our holiday tables?) Roasted meats were big, of course–pork, beef, chicken, and the boar’s head of the song, along with stewed and spiced vegetables and fine white manchet bread. Queen Elizabeth, unlike her father, was a light eater, but she did love sweets, which were prominent on her Christmas table. Candied flowers, hard candies in a thick syrup called suckets (eaten with special sucket spoons), Portugese figs, precious Spanish oranges, fruit tarts, gingerbread, and the famous figgy pudding. The grand feasts ended with the parade of the subtlety, a sugar art sculpture. (In 1564, it was a candy Whitehall Palace, complete with a frozen sugar Thames). All this was washed down with rivers of wines (malmsey, Gascon, and Rhenish wines were the most popular at Court), beer, and ale, with lots of singing and goofiness predictably ensuing. In 1564, though, they could work off all this eating by skating, sledding, and hunting, thus keeping their fine figures to attract the Queen and other courtiers.

On my website I have a few Elizabethan-era recipes for the holidays, but this was my favorite (the famous roasted peacock):

“Take a peacock, break its neck and drain it. (Super easy, right?) Carefully skin it, keeping the skin and feathers together with the head still attached at the end of the neck. Roast only the bird with its legs tucked under. When it is roasted enough, (how do we do this without pre-heating??) take it out and let it cool. Sprinkle cumin on the inside of the skin, then wind it with the feathers and the tail about the body. Serve with the tail feathers upright, its neck propped up from within, and a lighted taper in its beak. If it is a royal dish, cover the beak with fine gold leaf. Carry the bird to the table at the head of a procession of lower dishes for to be sampled first by the monarch. Serve with ginger sauce.”

What are your favorite holiday traditions??? Any special foods you like to serve (besides peacock?). Would anyone else besides me like a time machine to go back and have Christmas in Tudor England (or any other period), just once?

Yes, I’d love to try out a Tudor Christmas! Great details, Amanda. You really bring the season alive. I might pass on the peacock, but I’d like to see it on the table. Especially with the gold leaf on its beak.

No special dishes here, but Halloween is my favorite holiday of the year.

I don’t know about a Tudor Christmas. The peacock is a definate NO. Our family, with the exception of me, are all turkey eaters. Can’t get enough of turkey. Personally, I’m not much of a meat eater and I can’t stand turkey. One thing I will say though, they probably set a wonderful and different table for Christmas.

Oooh I would love to go back in time and celebrate a Tudor Christmas, a Regency Christmas too!

However, I would have trouble eating a bird that was staring at me! When we first arrived in England in 1967 we were settled in a nice hotel until Dad could find a house for us to rent. The hotel was an old estate turned into a hotel. Our very first meal Dad ordered a fish dish and they brought it to the table with the head on it! Dad made them take it back and decapitate it!

My favorite holiday traditions involve my Mom’s chicken and dumplings, her Japanese fruit cake and her Lane cake. Oh yes, and her dressing! Her dressing is SO good that my sister-in-law’s family DEMANDS that my Mom make the dressing for the big annual multi-family Thanksgiving dinner.

Okay, now I am hungry for a Thanksgiving dinner, and it’s still 3 1/2 weeks away! Louisa, I hope sometime you’ll share your mother’s dressing recipe. My grandmother also made a wonderful dressing every year, but never wrote down the recipe! (not that I could make it anyway–I’m not a good cook)

I would love to have an old fashioned Christmas with good food, drink, friends and a festive attitude instead of the emphasis being on Santa, presents and such. 12 days of festivities would be great.

I’ve been wanting to try roast goose for some time, but the only goose I found in the store was way too expensive! Maybe when my ship comes in. As for a Tudor Christmas – Um, all I can think of is the difficulties one would encounter when suddenly appearing in Tudor England as a time traveler. Chicken, I know.

But my fave holiday treat is the Canadian specialty, butter tarts. If anyone wants the recipe, I just posted it on my personal blog (www.barbaramonajem.blogspot.com). Butter tarts are scrumptious and irresistible and I absolutely adore them.

I think I would be huddled in front of the Yule log the whole time. All I can think of was how cold it must have been!

I probably would not have appreciated a Frost Fair either. I hate to be cold!

Turkey is OK if it’s been brined first, but I’d just as soon skip the turkey and load my plate with dressing (my Aunt Brenda’s cornbread stuffing and my mom’s apple-sausage stuffing) and homemade cranberry sauce.

It would be wonderful to go back and just be an observer of events and celebrations. We have written accounts and paintings, but nothing could match actually being there. Who knows what else would we would discover?
Mincemeat pie, that is what I always look forward to with Christmas dinner.

Hi Amanda,
I love the info and your post. I would love to go to at least once back to Tudor times to celebrate.
But sitting at the end of the table because I couldn’t look at a peacock that was dressed in his feathers. 🙂 No thanks. It’s turkey and ham on our table with our turnips and potatoes mashed together with cream and butter. So very good lathered in gravy. :0
Carol L.

Christmas food to me will always be a quasi-traditional Norwegian meal of cold meat, cheese, and cinnamony rice porridge, eaten by candlelight on Christmas eve.

Then the fun starts. Our family celebrates all twelve days of Christmas by having each person open one present each night, from Christmas Eve till Twelfth Night. It’s all done very ceremonially, and we keep a written log of who opened what.

I always thought that part was an old tradition, rooted in our very season-conscious Lutheran heritage. But here’s the kicker: my grandmother instituted it in the ’60s, to avoid the manic, messy crush of four children opening all their presents on Christmas morning!