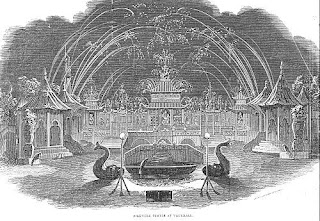 Occasionally people ask me if Halloween is celebrated in England and I tell them that now it’s quite a big deal. I’m surprised that the sweet-loving English took so long to figure out that any day when candy is given away is worth adopting. But when I was growing up we preferred to burn Catholics in effigy. You can read some earlier Risky posts about the Gunpowder Plot, Diane’s in 2007 and mine in 2005, so today I thought I’d talk about fireworks (and who hasn’t written a Vauxhall Gardens scene with fireworks?)

Like so many other inventions, fireworks originated in China, possibly as early as the ninth century, the legend being that common kitchen ingredients, saltpeter, sulfur, and charcoal (ugh) combined to explode. So the early emphasis was on loud bangs, thought to scare off evil spirits. When fireworks came west and were adopted by the royal courts of Europe in the Renaissance, the color scheme was somewhat limited at first, mostly in shades of amber, so the emphasis was on elaborate structures built to display the fireworks. The Italian style featured fake buildings, decorated with painted allegorical figures or flowers, whereas the German (Northern School) preferred one centerpiece, such as a figure of Cupid, from which the fireworks emerged. 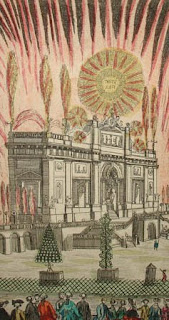 By the eighteenth century more colors were added to the repertoire and public firework displays became elaborate affairs, often with music, and frequently lasting a couple of hours. The illustration at left is a detail of a fireworks display in Green Park, London, in 1763. One of the most interesting things about this print is that it’s an early 3-D experiment known as a vue d’optique–the words inside the explosion are Vivat Rex in reverse, because the print was designed to be viewed through a mirrored viewer. You can read more about it here.

One of the most famous public fireworks displays was the one in 1749 to celebrate the end of the war for Austrian succession. Handel was commissioned to write the music (Music for the Royal Fireworks), the “machine” from which the fireworks were to be set off took four months to build and 11,000 fireworks were designed by an Italian team led by the noted Gaetano Ruggieri. But the English technicians appointed to set off the fireworks got in a fight with the Italians and half of them were set off prematurely. The rest were never set off. Several spectators died in freak accidents–drowning, falling out of trees. When Princess Di and Prince Charles married in 1981, an attempt was made to replicate this firework display, and it was a dud then, too–“Wedding 6: Fireworks 0” according to the Evening Standard. 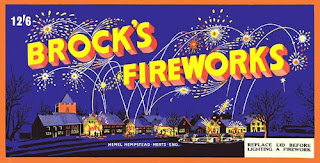 One intriguing fact that came out when I was reading about fireworks was that many of the manufacturers were family businesses that spanned several generations. Brocks Fireworks, the oldest English company, was founded early in the eighteenth century and started a tradition of public firework displays for the general public in 1826, and given at the Crystal Palace after 1865. The company was eventually bought out by the now defunct Standard Fireworks. More info on English firework companies and some quite gorgeous artwork here.

Do you have a favorite fictional fireworks scene?

My favorite fictional fireworks scene does not take place in a book, but a movie. I love the fireworks scene in Thoroughly Modern Millie. For those of you who don’t know this genius musical about 1920s and white slavery you should definitely NetFlix it. If nothing else the costumes and James Fox are to die for. The fireworks scene takes place in a fireworks factory in Chinatown in New York City. Millie is smoking or trying to and coughs and then throws the cigarette into a fireworks factory. She doesn’t know it’s a fireworks factory because the sign is in Chinese. This factory also is where single young white women are taken after being sold into white slavery. They are packed up in crates and mailed out. One crate reads “Big Mary’s Tart Shop, Peking” which is one of my favorite things about the movie. The fireworks go off and all chaos ensues. Only to be worked out with a kitschy dance number. I have watched this movie so many times I know all the dances. Don’t be fooled by the Broadway show. The movie is much better and the fireworks seen, to use 1920s vernacular, is the bee’s knees.

I’m in London right now. Fireworks started up at nightfall and look like going well into the night. Bangs and sparks in the street outside the restaurant I was in this evening.

Fred Astaire’s firecracker dance number in Holiday Inn! I know, not a book either, but Pure Genius.

The fireworks over the Hudson river on July 4th this year were incredible, as was the crowd control.

I’ve done the fireworks, Janet! Twice. In A Reputable Rake and Innocence and Impropriety. I really love Vauxhall Gardens as a setting.

For the Bicentennial, My husband, sister and I sat on the Virginia side of the Potomac and, with tons of other people, watched the 4th of July Fireworks from the Mall. Another year we were just driving on the Virginia side and stopped on the road to watch the fireworks. When our kids were little we always went to the smaller fireworks in Vienna, VA.

I remember one scene I read years ago don’t remember the book or the exact details. There was some sort of massive fireworks display planned, probably for the Prince Regent. A Chinese Pagoda was built to be part of it, probably in the Gardens.
We went to the fireworks on the mall in DC the first year we lived in the area. We had company from California and spent the day. They really were spectacular. A mad crush of people but it was worth it.