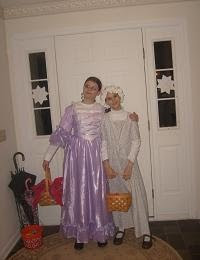 The DVD for the 1981 version of Sense & Sensibility has been sitting on my dresser since January, when my husband had his stroke. Once in a while, I’d notice it and think about sending it back to Netflix and lowering our service to 1 DVD a month, but I kept hoping to get a chance to watch it.

Anyway, last week I finally got my chance. My younger daughter decided to reuse the Felicity (American girl) costume I’d made for her older sister a few years ago, which was nice. But the older one wanted to stay in theme and go as Abigail Adams. See, Megan has the cool kid, while mine are nerdy, though in a cool way, I think. 🙂

Hoping to save time, I bought an old prom dress at Salvation Army, telling myself that changing the sleeves and shortening the hem would be easier than sewing a new gown. Ha! Not only did I have to make new sleeves, I had to redo the bodice and since I wanted to preserve the ruffle at the hem, I had to detach the bodice from the skirt, etc… Well, you get the picture. I was up late sewing for a few nights before Halloween and decided the S&S DVD would help me stay awake.

I’m pretty much an Austen adaptation ho—there are few versions I don’t like. Unfortunately this is one of the few.

The script was clunky, IMHO, showing little of Jane’s wit or liveliness. There were scenes with minor characters that seemed thrown in for no obvious reason (I don’t remember if they were in the book). The pacing was slow, except for the rushed ending in which we were gypped of seeing the resolution of Marianne and Colonel Brandon’s romance. 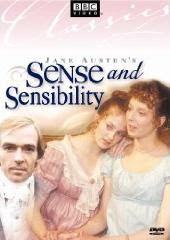 To my mind, the worst problem was with the characterization of the two sisters. The differences between the two sisters were exaggerated to the point that they became one-dimensional: Elinor coldly robotic, Marianne spoiled rotten. When Marianne gets overly dramatic about her feelings on leaving Norland, Elinor is almost cruel in dismissing the real emotions underlying her sister’s dramatics. I really couldn’t care much about either of them.

It seems to me that some of the Austen adaptations of this period, though they seem to be attempting to be painstakingly accurate, are so busy hallowing Jane that they miss out on wit and vitality of her work and characters. They seem to carefully eschew anything that might look like sexual attraction. Some subtle sexual tension would be very much in the spirit of the books, IMHO. I think some of the more recent adaptations work better, even if they don’t follow the books as slavishly.

One thing I did like about this version is the simple look of the interiors and the clothing, which seemed like what the Dashwood girls could afford rather getting a glamorized Hollywood treatment.

But overall, I prefer either the Emma Thompson or last year’s BBC version to this one. I’d recommend it only if you are like me and feel compelled to see every Austen adaptation out there.

So has anyone else seen this version? What did you think? What approach to Austen film adaptations do you like best?

Hi Elena!!! I am soooo excited to see you here today–and to get a glimpse of your daughters’ costumes. They look great. 🙂

I think you are very right about this version of S&S (though it’s been a while since I’ve seen it! The only one of those early adaptations I like is the Garvie/Rintoul P&P–the others are too stiff and “cold” for me). Not sure I can articulate what makes me like one Austen adaptation and not another. They don’t have to be exactly MY idea of the story (I really like the ’05 P&P, which others despise! But I strongly disliked the two newest versions of Persuasion and Mansfield Park, while I enjoyed S&S and especially Northanger Abbey). I think I want to feel like the characters are “real” people, imbued with the Austen spirit no matter what their surroundings or clothes look like.

I *know* I watched it (I have the BBC Jane Austen collection and I know I watched the whole lot of them) but I don’t remember a single thing about it–as opposed to, say, Persuasion or Northanger Abbey, so I guess that means I wasn’t impressed at all. I really love Ang Lee’s version but I haven’t seen the other one you mentioned. I’ll have to be on the lookout for it!

Amanda, I think you and my girls would love to play dress-up together. As for me, I went to our church Halloween party as a Tired Mom–in bathrobe and slippers, with a big mug of coffee. 🙂

As to the movies, I found the Garvie/Rintoul version a bit stiff, him especially, but nowhere near as bad as this one. The ’05 P&P I liked better the second time I saw it, once I’d come to terms with some of the license it took.

Christine, I quite liked last year’s version. I liked the Emma Thompson one but it took a bit of suspension of disbelief–though a wonderful actress, she looks so much older than Elinor should.

Hi, Elena!!!!
I’m so glad I’m not the only one who orders a Netflix and then waits forever to watch it. I don’t have any excuses, though, as you do. It is wonderful that you had the time to work on a costume. I hope things are getting even more back to normal.

I saw this version a long long time ago, but I quite liked it then. I did, however, see it before 1995, that year when so many great Austen adaptations came out and spoiled us forever. 🙂

I recall quite liking Elinor (the same actress played Charlotte in the Garvie/Rintoul P&P), and liking Marianne well enough. Of course, I have serious problems with the Marianne in the book, so that probably colors my opinion.

And I definitely liked this S&S better than two of the other early BBC Austens (Persuasion and MP.) I found this S&S quite watchable. Though of course it’s so long ago that I don’t recall many details…

And I was eating delicious tea food at the time… My then roommate and I used to have “teas” where we’d have tons of tea food (and tea) and show a Jane Austen adaptation or similar… It was such fun!

Oh, and love the costumes!