A few weeks ago I blogged on the birthday of a “bad girl of history,” Pauline Bonaparte. Today is the birthday of another one! Ninon de Lenclos, who was born November 10, 1620. Ninon was a writer, courtesan, and patron of the arts in Louis XIV’s France. When she died at the age of 85, Saint-Simon wrote of her, “A shining example of the triumph of vice, when directed with intelligence and redeemed by a little virtue.”

She was born Anne de Lenclos in Paris, “Ninon” was her childhood nickname. In 1632 her father was exiled from France for dueling, and when her mother died a few years later Ninon entered a convent. This didn’t last very long. She was determined to remain unmarried, but also to devote her life to pleasure of all kinds–not a life suited to a convent! On her return to Paris, she quickly became very popular in the salons, and soon opened her own, which was a center of the literary arts. Moliere was her protege, and on her death she left money for the 9-year-old son of her accountant to buy books–he would later be known as Voltaire. 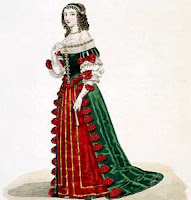 She also took up the life of a courtesan, with a succession of rich and noble lovers, including the King’s own cousin Gaston de Coligny, and the duc de la Rochefoucauld. Saint-Simon wrote, “Ninon always had crowds of adorers but never more than one lover at a time, and when she tired of the present occupier she said so frankly and took another. Yet such was the authority of this wanton, that no man dared fall out with his successful rival; he was only too happy to be allowed to visit as a familiar friend.” Her profession and her outspoken opinions against organized religion caused her to be imprisoned at the Madelonnettes Convent in 1656 at the instigation of Anne of Austria, Queen Regent for her son Louis XIV. (When he grew up, of course, this sort of life was much more accepted!). She was soon visited by Queen Christina of Sweden (then abdicated and traveling around Europe), who wrote to Cardinal Mazarin and arranged Ninon’s release. (At one point in her life, Cardinal Richelieu offered her 50,000 crowns for one night in her bed. She took the money, but sent a friend instead. Just one of the many anecdotes of her eventful career…) 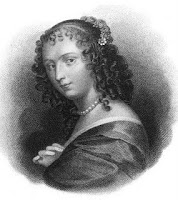 In 1659, Ninon wrote La coquette vengee, defending the possibility of living a good life in the absence of religion. She became friends with Racine, and also with Francoise d’Aubigne (later known as Madame de Maintenon, secret wife of Louis XIV). She went on writing and hosting her salons until her death in 1705, a very wealthy and famous woman.

There aren’t a lot of sources on her life in English, though she appears in many bios of other figures of the period. I have an old volume in translation by Antoine Bret, The Biography of Ninon de Lenclos, and there is one in French by Rogier Duchene. And there is a Dorothy Parker poem, Ninon de Lenclos On Her Last Birthday.

I guess Ninon could be the heroine of one of the popular “courtesan” romances, except she never settled down! 🙂 Do you like courtesan heroines? 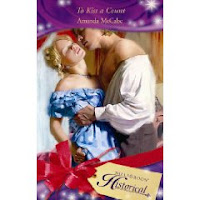 And I almost forgot! I have a UK release this month, To Kiss a Count (the third in my Muses of Mayfair trilogy! These will be out in the US in April, May, and June 2010…)

I’ll also be at a 6-author booksigning at a Borders in Albuquerque on Saturday the 14th–if you’re in the area come by and say hi!

Wonderful post Amanda. Ninon de Lenclos was one of the first women that I wrote about for Scandalous Women.

I love hearing about women who manage to control their own destinies in spite of the times in which they live. I am so curious about how she made the transition from the convent to courtesan–what occurred to cause her to make that transition?

Congrats on yet another book release! 2010 is going to be a book-filled year for you!

Here is a link to an old book about Ninon, which should have lots more information for anyone interested!

The new bio of Madame de Maintenon (“The Secret Wife of Louis XIV”–sorry, I’m not at home so can’t grab the book to double-check the author!) also has some good stuff about Ninon, and all of Maintenon’s circle of friends. I really enjoyed it.

Great post- I soo enjoyed it! Of course I love courtesan heroines- the glamour, the wit, the entrepreuneur spirit and determination..all of it is fascinating. I especially love the Venetian courtesans and am always impressed by their astute artistic talents which were at the core of their profession as well (besides their obvious talents;) sadly, many of them had to renounce what their own hearts felt in order to make a living for themselves and others they often supported (family, children and orphans) Wonderful post- thanks:)

Courtesans have alwasy fascinated me for some reason. It is a life I couldn’t begin to imagine living though.

Hi 🙂
Thank you for the great post. I loved learning about Ninon. It sounds like she had a far reaching effect beyond her own life. She sounds like an interesting woman!
Thank you for sharing,
All the best,
RKCharron
xoxo

What a naughty girl she was!

I find it very difficult to write about courtesans–they’re still living on men’s terms however independent they might appear. But I do like to hear about someone like Ninon who died wealthy and respected and didn’t come to a sticky end.

Diane, I don’t think Ninon was particularly religious, and at that time, if you weren’t going to be married, the convent was one of the choices. There are so many interesting stories about Ninon, some of which aren’t true. One story says that she had a son, who she gave up, and years later a young man appeared who fell in love with her, who turned out to be the son.

The NYPL has a bunch of books about her in their research library. Delilah Marvelle based a character on Ninon in her series for Kensington.

OMG! I want that red and green dress.

And Diane said it better than I could’ve expressed it: “I love hearing about women who manage to control their own destinies in spite of the times in which they live.”

Fascinating, Amanda! Ninon sounds like my kind of gal. As the Divine One said her determination to live on her own terms and to do with her life the things she wanted is an admirable quality considering the times in which she lived.

I realize she may have been somewhat dependent on men for money, but eventually I have a feeling she became self-sufficient.

What an interesting post. We think of women being powerless pawns historically, and for the most part they were. It is interesting that the women with the power and influence were the ones that managed to use “their talents” to advance themselves and acquire fortunes. Women who were able to have this level of independence often used their influence to support causes and support the arts.