I know I should be writing something erudite about the latest Harlequin-RWA debacle but I’m also reading Terry Pratchett and I think it’s coloring my perception. Truly, this is something that belongs in Discworld. I am also in the thick of deadline hell and am about to behead Jane Austen so you can see I’m rather distracted. 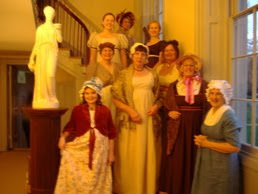 So I’ll tell you instead what I did last weekend, which was to attend the Ladies Day at the federal-era Riversdale House Museum, a wonderful day of activities centered around Rosalie Stier Calvert‘s love of gardening and typical flower-related activities. Here are all the ladies in costume (once again my maid neglected to clean and iron my gown in time), with a rather beautiful golden glow that looks like candlelight but is in fact a result of the failing battery in the camera. 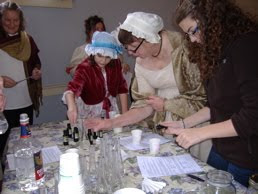 We made perfume using essential oils and yes, vodka, and mine has a bergamot base because I like the name rather than the smell, but I hope it improves over the next couple of weeks.

One very exciting part of the day was a lecture by Stacey Hampton, an expert on nineteenth-century hairstyles and hair ornaments. She gave us a terrific list of resources, including the website Timely Tresses. 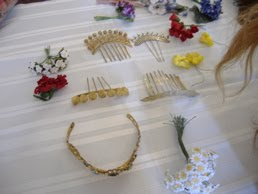 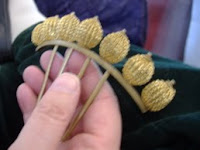 She brought in a selection of Regency hair ornaments from her collection which we were allowed to touch, and she also gave a demonstration, on fake heads, of how to build a Regency hair style. 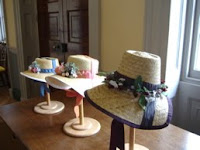 Also on display where these three beautiful bonnets decorated with flowers, constructed by Riversdale’s historian Dr. Ann Wass. You can see in the background the original front doors of the house, a source of great pride for Rosalie Calvert, who boasted that not even Tommy Jeff in the White House had real solid mahogany doors. 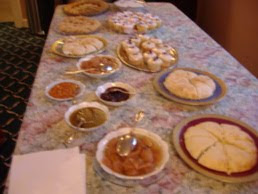 In the afternoon we had afternoon tea with scones, neither of which are period, but are just plain good; we made the scones and we also attempted to sugar petals as decorations for the cupcakes, for which we made very runny icing (those egg whites would not stiffen. I spent a long time outside in the cool air with a bowl and a whisk). Sorry about the pic blurred with greed. We had spiced pear compote made with Riversdale’s own pears and an interesting Swedish carrot marmalade for the scones.

So that’s what I’ve been up to. What are you up to? And, aargh, it’s Thanksgiving next week. Are you ready? I’m off the hook since I don’t have a working oven…

Another bit of news. You can buy my next Regency chicklit book IMPROPER RELATIONS in advance at 55% off at bookdepository.com! Still no final cover but I know it will be pretty. The release date is February, 2010.

11 Responses to Ladies Day at Riversdale