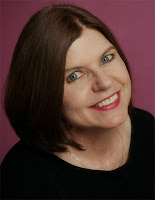 Today, the Riskies are delighted to present an interview with one of our own, Diane Gaston. Her newest book Gallant Officer, Forbidden Lady is out now. A random commenter on today’s post will win a copy of Diane’s new book!

Gallant Officer, Forbidden Lady is the first book in my Soldiers Trilogy. Three soldiers—an ensign, a lieutenant, and a captain—share a ghastly and distressing experience after the battle of Badajoz, an experience they agree to keep secret. It affects the rest of their lives.
Battle-weary soldier turned brooding artist, Jack Vernon, is hired to paint London theatre’s newest sensation, Ariana Blane. As this stunningly beautiful actress ignites feelings Jack thought destroyed in battle, another man has Ariana in his sights.

You’ve got such a deft touch with your historical details; just how many research books do you have?
Omigosh, I’ve never counted them. I estimate I have about 700. I would love to catalogue them and organize them better. For Christmas I want this BOOKCOLLECTOR software! 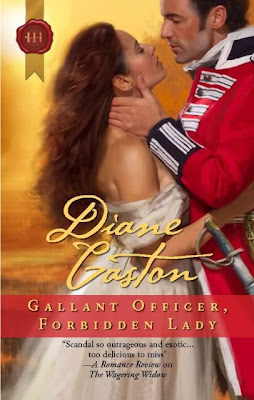 What inspired the story?
When I was groping for story ideas my friend Julie suggested I watch the 1935 Gary Cooper, Franchot Tone movie, Lives of the Bengal Lancers, a story about three soldiers who go through hardships and adventures together in British India (Julie loves watching old movies!). What I took from the movie was the idea of three soldiers sharing an experience during the war, something that affects the rest of their lives. I also took from the film a tough Colonel (although I made him a General) who has a weak son under his command. This formed the basis of the trilogy.
What did your editor say when you said you wanted to write about two people, neither of whom had titles?
This is my niche at Harlequin Historical. They want me to write about the seamier side of the Regency, or, as they wrote on the back cover copy of my first book, The Mysterious Miss M, “The Regency Underworld- sex, scandal and redeeming love.”
How hard was it to be a virtuous actress at that time? How many actresses went on to get titles and make their way into Society?
I think it must have been very hard to be a virtuous actress during the Regency. I imagine women in the theatre would expect to become some man’s mistress. They’d hope to attract the attention of a wealthy man to supplement their income, so to speak.
One actress managed to marry a man with a title. Elizabeth Farren, who has a lovely portrait by Sir Thomas Lawrence in the Metropolitan Museum, married the Earl of Derby in 1797. Because she had the patronage of the Duke of York (one of the king’s sons), she managed some sort of acceptance in Society. There may have been other actresses who made good, but I can’t think of any at the moment.
It’s easy to really feel for what Jack went through; what true accounts, if any, did you read to get the feel of Badajoz and Jack’s subsequent PTSD?
I bought a book (to add to the 700), Badajoz 1812: Wellington’s Bloodiest Battle by Ian Fletcher, and pored through the brazillion Napoleonic War books I already own, as well as looking online. As for Jack’s PTSD, I just transferred what I knew about the diagnosis into how a soldier during the Regency would experience it.
What risks did you take with this book?
I thought the artist hero was a risk, because it was a challenge to keep him “hunky.” For the whole series, I think it is a risk to begin each book with the same scene. The challenge is to make the same scene different in each of the books.
Did you learn anything new?
I learned a lot about paint! (I bought a book about that, too – Techniques of the World’s Great Painters by Waldemar Januszczak). I learned to paint in oils while still in elementary school, but that was a long time ago. Not long enough to be similar to the Regency, so I had to learn about paint before it came in tubes. For example, I learned that Gainsborough used a pure white pigment called Cremora White. So Jack did, too.

Thanks, Diane! And congratulations on Gallant Officer, Forbidden Lady‘s release. What questions do you have for Diane? And don’t forget to visit her website at DianeGaston.com.

Congratulations Diane on the new series. Will all the heroines in the series have be risky like your first one?

I finished this one a few days ago and I LOVED it! The hero is DEFINITELY a hunk and a half! The image of him standing barefoot in his painter’s shirt and breeches …. THUNK !!

I really did love every minute of it. The characters are so complicated and their lives are in the control of so many other people that it seems almost impossible for them to ever end up together. Fabulous work, O Divine One. AGAIN!

I love that you chose an artist hero…I have no trouble believing them to be “hunky”. I hope Santa brings you the software so we can continue to benefit from all your research!

Hi, Diane! I have read an excerpt from “Gallant Officer,Forbidden Lady”, and there is no doubt that Jack is a HUNK! Beautiful cover with the brilliant red uniform coat!

If you had to choose a place and time frame in which to live, what would it be?

I love your choice of unlikely characters. Can’t wait to start the series! *sigh* No way to go wrong with a good regency…

I have to thank you for introducing me to the book cataloging software – it just jumped to the top of my Christmas list! As for a hunky artist hero, I think I am definitely going to have to read it to see – although so far all reviews I have read seem to think you have succeeded wonderfully!

Maureen, the heroines of the next two books will be different, I hope. Marian, the heroine of book 2is a regency young lady but an unusual one.

Louisa, thank you so much for the kind words about GOFL!

Amy, if the book software does anything it will save me from buying books twice!

Virginia, I would have loved to have lived in the Regency. I can’t really think of another time I’d like so well. Unfortunately, I think I would probably have been a scullery maid or something and that would not be as much fun. Another time period I find intriguing is the WWII era. It has a lot in common with the Regency, I think!

Tiffany, I have Diane Whiteside to thank for pointing me to the Book Collector software. I hope Santa brings it to you! There is one review “out there” that is not quite glowing, but I don’t think I’ll point anyone to it. Can’t please everyone.

My Eclectic Reads, welcome to the Riskies. We’re all about Regency here!!!

Diane,
Just an offer, I do have a degree in library science and have catalogued my library as well as an art collection at a local high school, which had art ranging from 16th century to present day. So if you need someone to catalogue your books and you don’t mind that she spells catalogue the British way, you should totally contact me. Looking forward to the book and its counterparts.

Diane, I forgot to mention my fee: I’ll do it for an autographed book and a reference for future cataloguing work 🙂

Wow, Jane, what a generous offer! Email me at diane@dianegaston.com and we can talk!

I like the idea of redeeming love. We are only human and make mistakes all the time. So it’s great, Diane, for you give the hero or heroine a second chance.

Hi 🙂
Thanks for the interview with Diane Gaston & thank you Diane for sharing here today. I really enjoyed learning some of the backstory for her book and the research involved.
Thanks again,
RKCharron

Enid, I too like the concept of redeeming love. I really believe that loving another person makes us more than we were before.

RKCharron, thanks for your comments. It’s fun to talk about the background of a book!

Congratulations on the new series. The cover is striking. The Napoleonic War certainly has provided authors with a wealth of information and plot lines.
I am impressed with your library. I collect old books, and they can be fascinating, as well as a window into another time and place. They are great references for everyday details in a story.
This series will be a definite on my list. I look forward to reading all three.
Have a great Holiday Season!

librarypat, I think I’ve figured out how to get on a librarian’s good side! Just say how many research books I have!

I do have some old books. My big treasures are my Annual Registers from 1810 to 1820, and my 1815 La Belle Assemblee, complete with hand tinted fashion prints!

Hi Diane! I finally found my copy of GOFL! It seems like we’ve been waiting so long for your soldier stories–so glad they are finally here.

I’ve been moving into my new office which is giving me a fun reconnect to my research books. As in–it’s fun to say “Hey–I forgot I had this one–I’ve got to sit down and go over it.” Not so fun to carry them all out to the new shelves!

Oh, Deb, I’m envious! We should have you do a guest interview about your new office, complete with photos.
An organized office…..wonder what that would be like?

Your book sounds fascninating – the earlier Wellington campaigning is such an interesting period. Can’t believe you have 700 research books, though. Don’t worry, I won’t ask ‘Have you read them all?”!

Hahahahaha, Alison. Thanks for not asking!

Great post! Congrats on your new series! It sounds awesome and I can’t wait to read it.

I love this site. You guys are full of good historical information. In fact, I’m using some of the books and sites you all have mentioned here to write my historical. Thanks for doing the interview 🙂 Good luck with sales!

I have been waiting for Gallant Officer, Forbidden Lady to come out! I can’t wait to read this–what a wonderful early Christmas present!

Fabulous book, Diane! I couldn’t put it down! And I love the cover even more, now that I’ve read the book, because I know exactly where that picture belongs. 🙂

Where did you learn about the posing, ie, when they’re deciding what she’ll wear and what was considered scandalous?

Virginia and Katie, thanks for anticipating GOFL in such a positive way.

Judy, thank you again for saying what you like about GOFL!

Leona, we love history here, even though our “takes” on it tend to be individualistic. That makes it more fun I think. I’m glad you’ve found this a place you like.

what an awesome new series; congrats and I would love to peruse this book.

Having just finished a novel about an officer serving under Wellington in India, I’ve become esp. interested in this historical era. This novel sounds fascinating. Thanks for the giveaway opportunity.