Happy Tuesday, everyone! Hope your holiday shopping is almost done, and your errands complete (I’m planning to take the dogs to have their Santa photo taken this week, but other than that I’m done. I think). My Undone story, The Maid’s Lover, is still on eHarlequin if you’re in the mood for a Christmas story, and I just found out I have a new title for my next Undone (out in March 2010!)–To Bed a Libertine. I think that about says it all.

When I was trying to find a topic for today’s post, I came across the fact that Eliza Poe (actress and mother of Edgar Allen) died on December 8, 1811, and I remembered a book I found once at a library sale, The Brief Career of Eliza Poe (by Geddeth Smith, Fairleigh Dickinson University Press, 1988). I had to go and dig through my boxes in search of it, and found that aside from her famous (and famously weird!) son, Eliza had an interesting life of her own.

She was born Elizabeth Arnold in London in 1787. Her mother, also Elizabeth, was an actress in London until she married Henry Arnold and gave birth to her daughter. Henry died in 1789, and mother and child moved to Boston in search of a new life. Eliza made her debut at the age of 9, a character named Biddy Blair in a farce titled Miss In Her Teens by David Garrick, and received a good review in the Portland Herald, “Miss Arnold exceeded all praise. Although a miss of only nine years old, her powers as an actress will do credit to any of her sex of maturer age.” Later that year her mother married again, to a musician named Charles Tubbs, and they joined with a manager named Mr. Edgar to form their own troupe, the Charleston Comedians. Elizabeth senior died not long after this, probably as the company toured through North Carolina in 1798. 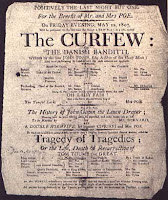 Eliza junior stayed with the troupe, traveling with them from city to city. She was a hit at the Chestnut Street Theater in Philadelphia, a large theater seating over 2000. Over the course of her career, she played over 300 roles, including her best-known parts of Juliet and Ophelia.

In the summer of 1802 she married Charles Hopkins, who died of yellow fever 3 years later, leaving her an 18-year-old widow. Six months after this untimely loss, Baltimore-born David Poe saw her performing in Norfolk, Virginia and fell deeply in love with her on sight. He abandoned his family’s plans for him to study law and joined her troupe. They married in 1806, and traveled throughout New England, playing to acclaim in Philadelphia and an outdoor summer theater in New York City before settling in Boston, where they stayed for 3 straight seasons in a theater of about 1000 seats. Besides her acting skills, reviews noted her “sweetly melodious voice” and “interesting figure.” Times were financially difficult, but they had 2 sons, William (born in 1807) and Edgar in 1809. (Eliza performed up until about 10 days before giving birth to him, in a boarding house near Boston Common). They moved to New York in summer 1809, where Eliza was praised for her talent while her husband was subject to harsh criticism (possibly suffering from crippling stage fright). He took to drinking heavily and became more and more hot-tempered. His exact fate is not known, but he’s thought to have died around December 1811. Eliza had one more child, a daughter Rosalie, born in 1810 (Rosalie is thought to have been mentally impaired in some way).

In autumn 1811, while staying at a boarding house in Richmond, Virginia for performances, Eliza began coughing blood, and by October she ceased performing altogether. Her last appearance was October 11, 1811, as Countess Wintersen in The Stranger. Other actors took care of the children while she was ill, and many in the theatrical community of Richmond took an interest in the family. On November 29, the Richmond Theater held a benefit performance on her behalf, announcing, “On this night, Mrs. Poe, lingering on a bed of disease and surrounded by her children, asks your assistance and asks it for perhaps the last time.” (Got that? The last time! Plus this theater burned down 3 weeks after Eliza died)

She died of tuberculosis on December 8 at the age of 24, her children at her side, and was buried at St. John’s Episcopal Church there in Richmond. The exact spot is unknown, though there’s now a memorial marker to her there. After this her 3 children were split up, William living with his paternal grandparents in Baltimore, Rosalie adopted by William and Jane Mackenzie in Richmond, and Edagr staying in that city also with adoptive parents John and Frances Allen. It’s speculated that this early loss of his mother (and also his young cousin/wife years later) inspired Poe’s favorite theme of dying women in Gothic circumstances.

Along with the Smith book (which has some great details of Regency-era theater life), there’s info about Eliza Poe in Jeffrey Meyers’ Edgar Allen Poe: His Life and Legacy.

Do you have any favorite Poe stories? When I was a kid, I found a copy of his complete works on my parents’ shelves and scared myself silly with them. (Until my parents took it away so I would quit waking them up in the middle of the night because I was sure someone who was un-dead was knocking on my wall…)

The Raven in the Frog Pond:
Edgar Allan Poe and the City of Boston

I was obsessed by the Raven for a while when I was younger, but really I think every dramatic child goes through that phase especially when Tiny Tunes does their own rendition of it. Surely as classic as Elmer Fudd and Bugs Bunny doing opera.

I will note that Poe books are often stolen from libraries. They are very hard to keep on the shelves.

I absolutely loved Poe. His poem, The Bells, was always one of my favorites. Annabelle Lee!

I toured one of his homes when I was in Philly. Being in that basement can really give you insight into where some of his ideas might have sprung from.

What a dramatic, sad, and short life! Poor Eliza.
The Raven still sticks with me, especially when the huge, shiny black crows perch on the railing of my deck…..

Insight into Poe! Very interesting. And serendipitous, I was just looking up Edgar on-line last night.

“The Raven still sticks with me, especially when the huge, shiny black crows perch on the railing of my deck”

I know!! There’s this crow that perches on my back fence–every time I see it I want to yell “Nevermore!”

I can see how, with such a sad beginning, Poe was preoccupied with darkness and sadness. Wish I could make it to that exhibit! (I think they had a “funeral” for him in Maryland recently, too…)

I read Poe when I was quite young, because he was one of the writers my father admired (Jane Austen was one of the others!). I keep meaning to visit Poe’s house in Baltimore, and one day I will.

When I did some research on early American opera/theater I was surprised at how many English troupes found their way across the Atlantic.

I love Poe’s poetry, especially his early stuff. I got into him at an early age, too. On my mom’s bookshelf, I happened across a book of his short stories. I scared myself silly by reading “The Pit and the Pendulum” and “The Fall of the House of Usher”. But especially the story of that sharp, swinging pendulum freaked me out in an addictive sort of way. 🙂

Thank you for this post on his mother. I’ve always wondered about her and it’s nice to have a glimpse into her life. Someone should write a novel about her! (I’d read!)

I’ve been doing a little more reading on that book today (it was a snow day from work, yay!), and it does have some fascinating details on the life of a traveling troupe in early America. Jessica, I think you were right it would make a great novel!

Oooh, the pendulum! That was one that really freaked me out when I was young, along with “Fall of the House of Usher”. And wasn’t there one about a portrait? A husband was painting his young wife’s portrait and she slowly died, all her spirit leaching into the painting. Or maybe that wasn’t a Poe story?

I’ve always admired crows and ravens for their intelligence. We have a mated pair of ravens near our house. But I was still shocked one day to see a crow deliberately chase a squirrel across a busy four lane road. Even into and out of the plant-filled meridian!
I’m happy to report that the squirrel made it, but it was a near thing.

What a very interesting post. I never looked into or knew much of Poe’s past. I was thinking The Tell Tale Heart as the one that got to me, but someone mentioned The Pit And The Pendulum. That one gives me the chills. Just about everything he did gave me nightmares.

What a sad story – poor Elizabeth.