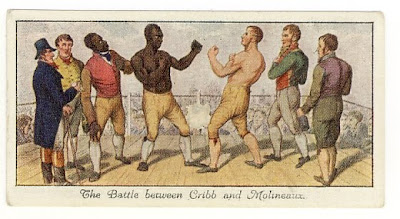 Today I’m talking about one of the favorite occupations (no, not that one) of the Regency gentleman. Now, I’m always flummoxed by what the wealthy and idle did all day, other than change clothes, particularly those gentlemen who seem to have time on their hands in a testosterone-rich, nationalistic era.

Boxing, or beating the crap out of each other with bare fists, was a favorite occupation, whether as spectator or participant (although the lines were somewhat blurred). Today is the anniversary of the 1810 match between Tom Molineaux, a former slave from Virginia, and Tom Cribb, the English champion. Cribb won, just. Molineaux’s finger was broken in a fracas with Cribb’s supporters after nineteen rounds. In the twenty-eighth round, Molineaux knocked Cribb out but was accused of hiding lead bullets in his fists, and during the argument Cribb revived and the fight continued. Molineaux slipped and hit his head on one of the ring posts, and fought on, but was beaten in the thirty ninth, or fortieth round. More here.

All good clean fun, according to the official rules of boxing at the time (pre-Queensberry, remember) which were as follows: 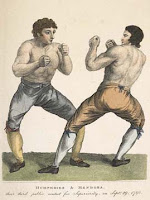 Yet boxing was regarded as a science, hence Pierce Egan’s definition, the sweet science of bruising, in his work Boxiana. Another English boxing champion, Daniel Mendoza of Portugese-Jewish descent, wrote a Treatize on Boxing. Mendoza was famous for revolutionizing the style of boxing; although he weighed only 160 lbs and stood 5′ 7″ tall, he was the first fighter to actually float like a butterfly and sting like a bee. Eighteenth century style demanded that opponents stood facing each other and just hit each other. Some spectators thought Mendoza’s style ungentlemanly.

And isn’t it interesting that an openly Jewish boxer and a black boxer found fame in England?

Here’s an excerpt from Improper Relations (February 2010, still 53% off with free shipping, hint, hint) regarding boxing:

Much to my relief, I am not to be the principal in a family drama. My brother George has appropriated that role, stretched upon the couch (his muddy boots still on his feet, something only he and Henry would be allowed to do), while my mama laments and groans, a basin in her hand.

He sits up. “Capital fellow, Shad!” I see now he has a dreadful black eye, and his appearance is not improved by a beefsteak dribbling blood onto his neckcloth. “Did a few rounds with me at Jackson’s, and you should see his right hook! Tremendous fellow, excellent sportsman, damned fast on his feet—”

My mother makes a tremulous whimpering sound at his strong language.

“Beg your pardon, ma’am,” he continues. “I wasn’t too keen on the idea of you marrying him, Lottie—he’s a trifle high in the instep I thought, for a fellow who’s got an estate in a pretty bad way, won’t enclose, you see, so he’s squandering money on his tenants, bad money after good. Or do I mean good after bad? So—”

“You mean Shad did that to you?” I’m horrified.

“Yes, and he got a few blows in on my ribs. Thought he’d broken one, but it’s not so bad now—”

She places her basin on a small table to reach for her decanter of cordial.

“Are you completely mad, George?”

He shrugs, the same stupid proud grin on his face. “Damned gentlemanly of him to invite me to a round, that’s all I can say. I’ll be proud to shake his hand and call him brother.”

“But you wanted to kill him last night.”

I’m not going to ask you if you’ve hit anyone recently, but what Regency pastimes do you find mindbogglingly idiotic? And which do you think you’d have enjoyed?

I really can’t see me enjoying getting my hair dressed every morning. I have very thin, very fine hair. And while I love the color (I have never dyed it) it really doesn’t do much except lay flat. It has no curl and doesn’t really hold curl. I can’t imagine anyone being able to make my hair look presentable in a Regency style and I really hate having to sit still why my hair gets done. I did ballet for 14 years and I hate getting my hair done for it since we didn’t have to wear the regulatory bun that traditional dancers wore. We were a little bit funky, which meant funky hair. Most of the time I pulled half of it up and let the other half lay flat although everyone would try to curl it. By the time my number was one my hair was quite flat. I could do the reading and the needlework (I love to cross-stitch…you should see my traveling cross-stitch wall where I’ve cross-stitched scenes of where I’ve been) and the horrid novel reading, but the hair would kill me.

Jane A, I believe your hair would be washed much less often than you wash it now and would be much easier to handle. If all else failed you could always buy curls to add on…

You don’t use the term, ‘pugilism.’ Was it in use at the time?

And for me, I hate to admit it but I would love to ride to hounds.

And drinking a fine sherry by the fire sounds quite nice too.

And since I’d have ample time to learn the dances, balls would be high on my list.

My daughter just finished performing as Clara in the Nutcracker. It took me 3 hours daily to get her fine hair into sausage curls. They felt like plastic when I was done. But I doubt that Regency ladies had the benefit of mohawk gel and Aqua Net.

Okay, not answering your questions, but to say David Liss’s book, A Conspiracy of Paper, is about an ex-boxer of Jewish descent, set about a hundred years earlier than our period. It details the banking industry’s nascent years, and is really fun to read, too.

I would really like to sit around and not have to clean up. Although I would likely hate having to do needlework.

I ordered Improper Relations!!! What a deal. Worth it, even if I can’t read it on my Kindle!

I believe I would have liked to take walks. Like Elizabeth Bennett, I’m very fond of walking. I probably would have loved to play whist or any other card game, as well.

Jane George, what a wonderful reason to have to force your daughter’s beautiful hair into curls.

Jane G, yes, the term pugilism was in use, but I think I must have forgotten about it! I bet your daughter is a lovely Clara.

Thanks for the book recommendation, Megan. George MacDonald Fraser wrote a book about Molineaux called Black Ajax, but I had trouble reading it altho I loved the Flashman books.

Diane, thanks for buying my book!

“Okay, not answering your questions, but to say David Liss’s book, A Conspiracy of Paper,”

Oh, I really liked that book, Megan! Thanks for reminding me about it.

Sometimes I think taking a punch at something would be a very useful thing, vis a vis stress relief. But probably I would have been into something dull like embroidery or watercolors. 🙂

After a day working at Wal-Mart especially during the holiday season I have given SERIOUS thought to taking up pugilism. The idea of taking a whack or two at some of these customers certainly has its appeal.

I, too, would love to ride to the hounds. So long as the fox gets away!

Jane George, how fun to have your daughter be Clara. I was never Clara in the Nutcracker, but I always got the role I wanted, which was Mrs. Ginger. She’s the huge fat lady that has all the little bon-bons come out of her dress. I used to sit on this huge table with boxing balloons (thee big ones with the strings that go back and forth) as my behind. Then I got to eat HUGE food and powder my face. It was my favorite role even though there was no dancing involved. One year the seniors were the mice and the first graders were the toy soldiers. It was great we carried them off the stage as we danced together. It was cute.

Hope your daughter has many more dancing adventures.