I’m glad I’m starting to see less of a certain reality TV couple on the newsstands and the grocery store. I haven’t watched Jon & Kate Plus 8, before or after the scandal. I was put off by the commercials which always seemed to feature screaming kids. I’ve been there, done that with two and have no desire to see it multiplied fourfold, you know? And I’m not much into reality TV, unless you count makeover shows. So I haven’t watched other shows featuring large families like Table for 12 or 18 Kids and Counting. 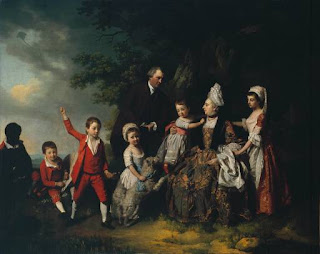 But they’re clearly popular. Maybe because most families are smaller now, people are just curious. Maybe people like the idea because they feel that in a large family one would never be lonely. (I’m not so sure.) But definitely there’s lots of room for chaos and conflict, never a dull moment. Personally, there are many times I *long* for dull moments when I could sit down with a cup of tea and a book! Although I love my family, I also really like being alone sometimes, so being part of a large family isn’t a personal fantasy of mine.

When talking about historical romance series, large families are historically accurate. While some couples went their separate ways after the production of the “heir and spare” or had small families for other reasons, many couples wanted large families. A wealthy lord might hope not only for an heir but also other sons who might (with his help) become generals, admirals, bishops, diplomats or MPs and thus extend the family’s influence. Daughters might make strategic alliances or at least be a comfort to their parents.

Amongst the fifty women studied in one of my favorite references books, In the Family Way by Judith Schneid Lewis, the mean number of children was 7.5. The most prolific lady studied, the Duchess of Leinster (1731-1814), had eighteen children by the Duke, went on after his death to marry her sons’ tutor and had three more children, for a total of 21 children in 31 years. Whew! It sounds exhausting, even with nursery staff, governesses and tutors to help. 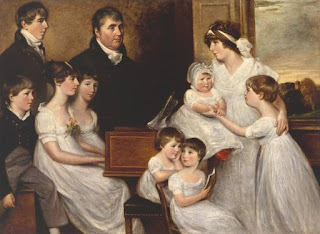 Many readers love historical romance series featuring large families. Personally, I’m OK with them but prefer when they aren’t too closely linked. I never have as much time as I’d like to read, so it’s nice that I can enjoy individual books, like those in Jo Beverley’s Malloren series, without committing to reading all of them on time and in order. I know, that violates the whole marketing concept, but I am not a typical reader.

I’m OK with romantic couples being depicted, in an epilogue, surrounded by a large and growing family. I can imagine that with the right household help, and with the hero being more involved as a father than most men of his time, it could work. But I don’t need to see a huge brood–or any children at all, for that matter–to believe the couple are happy.

Do you enjoy stories of large families, whether modern or historical? Why or why not? Do you have any favorite romance series featuring large families? What sorts of endings do you like to see for romantic couples?

Elena, I was just thinking about this very thing! I don’t like huge family series, with each brother or sister or whomever getting their own HEA. Because then I imagine all of them in a big room, all happy, and I have to laugh. That’s not what a real family is like.

I like series tied together from friendship, or experience, or something else.

Does this reaction have to do with the fact I’m an only child? Maybe, only I think siblings series can be a lazy out, too.

Elena, I always want to jump up and down in delight that you have the time to blog again! May you have more and more time for Risky Regencies and especially for being alone to savor a peaceful cup of tea and a book…and writing, of course!

Lots of time in reading about Regency families I read about women dying in childbirth and young children dying of illness. I have to imagine that pregnancy brought with it a certain amount of ambivalence.

My reading is such that I’d rarely complete a series about a large extended family and I’m much more likely to come in the middle and be confused. That said, as a writer, I’d be delighted if writing a family series brought me more readers!

Megan, I’m with you. It’s rare to find a large family in which all the siblings are happily married. I do know some large-ish families in which the siblings all seem to be happy, but not all with the same lifestyle choice.

Diane, I really don’t know how often I can post. Life is still pretty unpredictable. But I’m striving for a little “normal” now and then. 🙂

The romantic query letter and the happy-ever-after

I’ve seen it done well by Julia Quinn so yes I’m all for it.
Warm regards and a lovely weekend to you.

Nice post. I like the Malloren series but I can’t think of another family one I’ve read.

I come from a fairly large family — five kids and I’ve always enjoyed stories with siblings. I think Julia Quinn does a wonderful job showing sibling rivalry and love.

As a reader, all I care about is whether the story is good. If there’s lots of siblings, I rejoice when the book is well done because that means more books that I will like.

If I don’t care for the book, well, I am under no obligation to continue reading.

I also don’t mind stories with smaller families. Because, again, what I want is a story I love. Big family, small family — I don’t care.

Interesting topic, Elena. I come from a family of 10 and I can testify that it’s fun and chaotic to grow up.

I come from a large family. I am the oldest of 6, my Mom’s family had 9 children and my Dad’s had 7. It made for wild family reunions, still does. However, it is possible to be lonely in a large family, especially as the oldest of the siblings and cousins. There are a lot of wonderful things about large families and I’m glad I grew up in one. There was always drama, noise and a good kind of chaos. We would often have 15 kids at our house on weekends. Now that we are older, with our children and grandchildren, a family get together is really something. Not everyone has had a HEA, but there is always a lot of love and laughter.
We have three children and I would have liked to have had more. It wasn’t to be. Financially, large families are difficult in these times. Not everyone can get a corporate sponsor to help them out. I have not watched any of the reality TV programs on families, large or small. It can’t be very real with the cameras running.
I do enjoy series and those based on large families I can relate to. And yes, Megan, you can have everyone in a big room, all happy and having a good time. It may be for only a short time, but it does happen. With 65+- cousins, if you don’t get along with someone, it is easy to stay away and find someone else to spend time with ;o)

The second picture in your post makes me think of Georgette Heyer’s ‘The Grand Sophy’ – but that was a large family in which the one story takes place. Another large family that makes a good background is the Morland one in ‘Northanger Abbey’. “A family of ten willalways be called a fine family…” said Jane Austen.

But the series about a large family that I enjoy is Mary Balogh’s Bedwyn books.
And I’m writing a series myself about four schoolfriends [i.e four books] all obsessed with Lord Byron. More on that later…

Elena, so good to “see” you here this weekend!!! I myself come from a small family (only 2 kids), but my mother had 5 siblings (and very few HEAs among them!). I know large families are historically accurate–really, how could they help it?–but I would never want to have 19 kids myself. 🙂

I very much enjoy family series where the family dynamics are well-done and interesting (not just an excuse for 20 book series!)

Carolyn, Enid and Librarypat, thanks for weighing in on the large families. My own is medium-ish–in the previous generation everyone had 3-4 kids and in the present 1-2. Some of us have warm relationships, but some not so. Family events are generally cordial, but there are lways undercurrents.

I think that the reasons some people have large families now are often different from why they did historically–could result in a variety of family dynamics.

I just remembered that Loretta Chase’s recent series featured a family. I especially like her treatment of the younger sons, who can have different problems than the heir.

Beth, happy writing with the series. I like “friend” series, did a “Three Disgraces” one while I was still writing trads.

Elena, my great grandfather was a big-wig in Standard Oil. He had 19 children, 15 of which lived through adulthood. While some people might not like having this many children my branch of the family is certainly glad he did since we are descended from his last child, a daughter named Alma. My mother’s family is also large with parents having seven children and those children having seven children and so on and so forth. It’s fun to have such a large family although hard when you live in a small town because you can’t date anyone since you are most likely related 🙂 I do like reading about big families. I really enjoyed the Elizabeth Ashton novels based on P & P with the Darcys having five daughters and two sons. I think the one thing I like about the large family is the number of books that go with it. Plus I like seeing characters that I feel in love with in the first book come out in other books and you can see they are happy which I always like to see.

My maternal grandmother was the eldest of 21 children. Her father, A member of the Creek nation married a Creek bride and had eleven children with her before she died. He gave his eleven children away to relatives, moved to the next county, passed himself off as white and married a white woman with whom he had ten children. I had no idea she came from such a large family until she passed away. All of her siblings and half-siblings came to the funeral. It looked like a reunion of the winning team at Custer’s Last Stand.

There are only three of us, but we were really such awful children I don’t blame my Mom for not having more!

I do enjoy series about families because the family dynamic ESPECIALLY in Regency England is rife with emotional (or the lack thereof) turmoil. Makes for fun writing.