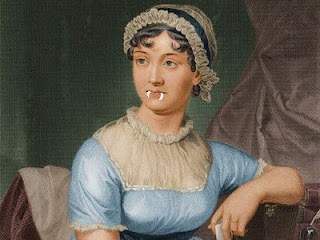 I’ve been trying to work out for years the real relationship between Austen and romance novels of the early twenty-first century. She was not, sigh, “the first writer of Regency romances.” She wrote contemporary novels.

She wrote about marriage for love in a society where everything had its price, but the majority of established married couples in her books are mismatched. Her characters, middling gentry, would mostly do better with a little more money in their lives, and very few of her hero/heroine matches face abject poverty or marry across class lines–there’s always that living to be had with the comfortable income, or he’s stinking rich (Darcy). After all, she said a large income is the best recipe for happiness I ever heard of.

And that’s the trouble with Jane Austen, or at least, quoting her. She is a mistress of irony and subtext which is why she’s read 200 years later and we still haven’t figured her or her books out. What did she really think? Was she Marianne or Elinor or Lizzie or any, or all of her heroines? When does the real Jane Austen speak in her novels? Or in her letters, for that matter, full of all that determined chatter of acquaintances and fashion and social events, knowing that although she might write to Cassandra, her letters were public property to be shared with other family members.

Imagine you’re at one of those country gatherings in Hampshire. Miss Jane Austen is in attendance with her sister Cassandra, the pretty one who would have married if the young man to whom she was engaged had lived. Miss Jane, though, is a bit of a mystery. She has the reputation of having been a dreadful flirt, she’s quite good-looking, well-read despite a somewhat patchy education, and is well if modestly dressed. There have been rumors of love affairs, and an inexplicably short engagement to a man five years her junior but exceedingly wealthy. Her family is well-connected, handsome, and clever.

Her glance over the rim of her wine glass rakes over you. She knows the price of every trim on your gown and the price of the fabric, too, having patronized the same shops in Basingstoke or Portsmouth or Winchester. You thought you could get away with a bit of reworking of your gown, hiding the panel your maid scorched with a too-hot iron, but she notices. She’s done the same herself.

You’d like to make her acquaintance, but of course you must wait to be introduced. You’re flattered by her interest, but something about that piercing hazel gaze makes you uncomfortable, and you wish she’d turn her attention elsewhere. It’s as though she is taking notes. She leans toward her sister and murmurs something in her ear and they both laugh…

So if purists gasp in shock and horror at monster mash books that have zombies in Meryton, sea monsters among the Dashwoods, TV adaptations full of sex and wet shirts, or even Austen as a vampire, I wouldn’t worry too much about it. She’s a tough girl. She can take it and so can her books.

Question: Do you think you would you have liked Jane Austen? And if you met her, what would you ask her?
Chat away for a chance to win a prize…

At first, I may have respected her, but not really liked her. After a time, I think that her intelligence would have won me over. I would ask her what was the funniest experience she had in her own life.

I know I would want to meet her. I might be a little intimidated at first, but I think her scathing wit and insight into the human condition would make it worth it. The only real insult would be if her opinion of me was indifference.

And I’d have to ask her about that broken engagement, but only after we’d known each other a long time.

I think I would have liked her a great deal! She is just the sort of person I would have gravitated to at a party, one who was a bit separate from the “popular girls.”

If we had become friends, I would have asked her if she had ever been in love, who with, and what happened. I have a feeling it would be a sad story.

I believe that Jane Austen, Alice Longworth Roosevelt and I would have gotten along beautifully. Sitting around sipping tea and secretly saying to each other “If you don’t have something nice to say come and sit next to me”.

If I could ask her a question it would be: What ending did you really want Persuasion to have?

oh i hope she was like Emma! i would love to spend an hour with an emma-like jane austen, as long as i was in her good books of course! i just wouldn’t let her match-make me.

and i bawled like a baby when i watched Becoming Jane.

I think I would have enjoyed her wit and humor, but I imagine I would have been on my guard until I knew her well enough to distinguish teasing bon mots from more bluntly critical observations. If, of course, she allowed me into that priveleged level of her friendship.

I bet I would have loved Jane Austen. Not romantically but as a friend.

I’m not sure. I once had a friend who had mastered the “art” of making comments that could be taken two ways, nice or nasty. And because I have a bit more wit than Mr. Collins, I have to say that this woman was not very much fun to be around.

But perhaps she just wasn’t as witty as Jane!

I imagine I’d like Jane. I enjoy her insights and comments if not always agreeing with them but then again, I wouldn’t be afraid to voice my disagreement. Funny that lustyreader mentioned an Emma-like Jane. I always hoped for the same thing!

It’s hard to know what I would think of her but it is to think of what it would be like to meet her. I believe I would want other people around to deflect her attention.

I think Austen was fiercely loyal to the ones she loved but I suspect she was rather reserved with others, who she regarded as fair game.
Of course I’d want to ask her about her relationships and what was in those letters Cassandra destroyed, whether she was annoyed that her gravestone doesn’t mention her identity as a writer, and what she thinks of books written now.

I would like the chance not just to meet her once, but enough times to become closer. I suspect she wasn’t one to become intimate too quickly. Questions about her love life would have to wait. If I had just one chance to meet her, I’d ask about writing. Though not something inane like where she got her ideas. 🙂

Janet, I think she’d be very amused and maybe a bit flattered–in a very wry, self-aware way–by all the spinoffs and takeoffs.

Sounds like she was a very astute social observer. She doesn’t come across as spiteful or malicious, so yes I would like to have been able to meet her and would have probably liked her. I think I would like to have a conversation with her about why she became a writer and what else she would like to be working on.
Since we se her as an historical Regency writer, it is hard to adjust the mindset to the fact that she was writing contemporary fiction.
librarypat at comcast dot net

LOL! Of course I’d love the chance to get to meet Jane–though I’m sure I would be totally frozen with awe the first time, so it would have to be more than once. 🙂

Somehow I imagine Jane would be a bit like Megan…

erm – I think, maybe, I would have felt pressure to say something smart whenever I was around her?

but would have wanted to stay there so I wouldn’t miss any smart and funny remarks of her own.

I would have loved to have met her and I’m sure I would like her. I’d talk to her about fashion and social events which she was up on(her letters about this to her sister). I’m sure we’d find lots in common.

I agree with you about her being tough.

And if such a meeting as the one you described were to take place between Jane Austen and myself, I think we would both find that we were caught observing each other with the same scrutiny and study. I spend a lot of time observing the action at gatherings, people probably think I have a staring problem! After Jane and I found out we were alike in this we would have a laugh and introduce each other Great question!