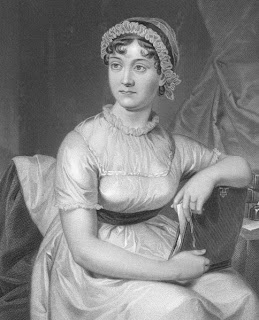 This Wednesday, Jane’s actual birthday, I went to the Morgan Library to see the exhibit A Woman’s Wit: Jane Austen’s Life and Legacy. I went with two writer friends–Liz Maverick, whose new book Crimson & Steam features a historical section, and Elizabeth Mahon, who is hard at work on her non-fiction book Scandalous Women (and who also does a blog with the same name).

The exhibition combines Jane’s correspondence–both from and to her–with prints of James Gillray, one of the caricaturists who lampooned society and politics with as broad a wit as Jane’s was subtle. 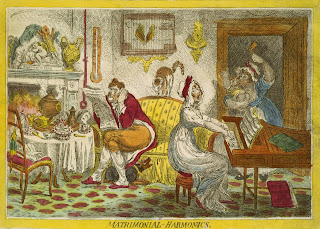 As might be expected, Jane’s letters were gently mocking of the life she observed around her, sharing candid appraisals of her friends, family and neighbors. But–and this is true of her writing, as well–she is never mean-spirited. Honest, direct, even blunt, but never mean. That delicate line is one of the things that makes her writing so special; yes, Mr. Collins is a pompous ass, for example, but she doesn’t exaggerate the ludicrousness of his personality, just describes it. That is damning enough.

If you click through to the exhibition, you can see samples of the letters, as well as a draft of Lady Susan, the only surviving complete manuscript in her hand. That is neat to see, because she writes with as firm a hand in her fiction as she does in her letters–no cross-outs, or scribbles, or anything that would indicate she had doubts about what the final version of the manuscript should be.

In addition to the prints and printed material, the exhibit featured a short film with reflections on Jane from a variety of intriguing sources: Cornel West, Siri Hustvedt and Fran Lebowitz, among others. My favorite was West, who was almost elfishly delighted with talking about how much he loved Jane. He came to her late, he said, only starting to read her in graduate school, but he clearly adored her work.

Like Jane herself, the exhibit was small but all-encompassing, revealing a witty, clever, loving woman who had a lot to share to a very intimate group. That group has expanded in the 200 or so years since her works were first given to the public, but that feeling of intimacy remains. Who among us, reading Jane, hasn’t felt as if she were sharing a private joke with us alone?

Thanks for sharing your wit, Miss Austen, and Many Happy Returns!

I really enjoyed the exhibit, and like you, I found Cornel West’s comments interesting and delightful.

Megan, I love this blog of yours very much! That line between wit and mean-spiritedness and an intimate, gossipy tone goes a long way towards making these stories fresh and enjoyables decades after they were first written.

How I envy you seeing this exhibit! What a wonderful testament to the brilliance and insight that is Jane Austen. And I think you have hit the nail on the head. She walks the line between wit and mean-spirited jab with grace and intelligence. A rare gift indeed.

I am going to see the exhibit January 16.

I wish I could go see that exhibit! I know what you mean about intimacy, Megan. For me, part of it is how much I recognize bits of myself and family and friends in Jane Austen’s characters.

What a lovely post! I also wish I could see this exhibit. Sigh.

It’s been a pleasure to visit your blog this week to celebrate Jane’s birthday. I really enjoy authors who let me make my own conclusions about the people in a story.

I was lucky enough to see the exhibit last Saturday. A friend of mine and I took a day trip to New York, and luckily managed to schedule it between bouts of bad weather. The exhibit was lovely — there’s something about seeing documents and items that an historical figure actually touched. Must admit that I never would have pegged Cornel West as a Jane Austen fan, but he had some insightful comments.

Oh, Megan, thank you for sharing this experience! I said “Yes!” when I read Who among us, reading Jane, hasn’t felt as if she were sharing a private joke with us alone?

Diane, thanks for the good wishes in the snow. Commencement is tomorrow at the University I plan events for and needless to say this is my first MAJOR university event. I am hoping against hope that we only have the 2 to 4 inches the weather channel predicts. Otherwise I’ve been planning since October and it could all go south very quickly.

PS Diane…did you see bookdepository.com is giving away 11,000 e-books? In order to get them on your Kindle if you want any. Download them to your computer. Check amazon.com for your Kindle’s e-mail address and send yourself an e-mail from whatever account you use and add the books as attachments. That’s how you get e-books that are not Kindle books. (Insider tip).

Ahhh, I wanna see this exhibit, too! Maybe if I make it to NYC next month…

I do love seeing things (especially handwritten letters and documents) that historical figures I admire have touched and owned. It somehow brings them closer to me. Geeky, I know. 🙂

Thanks, Jane Austen, for the heads up about 11,000 free ebooks! It’s impossible to search, but I did find a couple I will enjoy having!

I so wanted to go to this exhibit, but can’t make it to The Morgan. I was hoping it was a traveling exhibit so I could view it if it was shown closer to us. apparently it it an in house exhibit and will not be shown elsewhere. Too bad!