The Year in (Book) Review

Happy week after Christmas, everyone! How was your holiday? The weather here was frightful, but indoors was delightful. Lots of Christmas candy and Prosecco, along with the Say Yes to the Dress marathon on TLC (amazing how those dresses all look just alike after a while, yet everyone argues bitterly about them), and episodes from season one of Legend of the Seeker (thanks to the gift of the DVD set!). Now I have to get back to yoga, eating semi-healthy, and finishing the WIP. First a look back–and forward.

Forward: If you got your February issue of RT, you may notice my first Laurel McKee book, Countess of Scandal, is not reviewed therein. It seems there was some sort of snafu; hopefully we will see it in March. In the meantime, I did get my very first review, yay!!! From Romance Reviews: “This was an exciting, suspenseful, and very passionate story. Loved it and very much look forward to the next in this series. Interesting history lesson and a good backdrop for a first-class love story. Four checks!” (Sorry for the bragging interlude–I am soooo excited about this book, I can’t contain it!)

And now back, to the year that was 2009! It was a very good reading year indeed, at least for me. As usual, I didn’t get to read much fiction, except as vacation treats, but what I read was excellent. I loved how Carolyn’s Indiscreet blended a vivid, exotic setting with deep, complex emotions and intriguing characters, and how Diane brought a very realistic aspect to post-war trauma and the horrors of battle to Gallant Officer, Forbidden Lady. I just finished Gail Carriger’s Soulless, and I totally loved it! I’m fascinated by the steampunk sub-genre, and this was a terrific example with a wonderful heroine. Can’t wait for the next book. Also in romance, I enjoyed Carrie Lofty’s unusual look at the Robin Hood legend What a Scoundrel Wants and Liz Carlyle’s Tempted All Night. And I loved Susan Wittig Albert’s new Beatrix Potter mystery, The Tale of Applebeck Orchard (I really enjoy this whole series).

There are two other novels I read that really stayed with me. I read them months ago, and still remember them vividly, though they are very different from each other. The Guernsey Literary and Potato Peel Pie Society by Mary Ann Shaffer and Annie Burrows is an epistolary novel featuring extremely vivid characters and a well-drawn setting of an island under occupation and recovering from it post-war. I hate, hate, hate when a book is described as “uplifting,” but, well, this book really is. There are aspects that are quite dark, but overall it’s a lovely look at the resilience of people. I also loved Sarah Waters’ The Little Stranger, which had an equally vivid setting but was possibly the scariest book I have ever read! Dr. Faraday has long been obsessed with the local Stately Home, Hundreds Hall (which is its own character in the story) and its family the Ayerses. Class conflict melds with the supernatural, subtly building to a terrifying finish. Eeek, I shiver now just thinking about it!

And it was a truly exceptional year for terrific non-fiction. I had a hard time narrowing it down, but here are some that stand out for me: 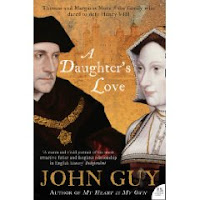 John Guy’s A Daughter’s Love, about Sir Thomas More and his devoted daughter Meg. Meg was More’s favorite child, a deeply intellectual woman who carried on his legacy after his death (and even effected a daring rescue of his head from London Bridge). A wonderful look at a dark, dangerous era and an extraordinary woman.

Veronica Buckley’s The Secret Wife of Louis XIV. Another extraordinary woman in dangerous times of violent change! Francoise d’Aubigne, Madame de Maintenon, rose from poverty-stricken beginnings as the daughter of a condemned traitor (reprieved at the last minute and sent off to the West Indies) and then teenaged wife of the cripple poet Scarron to the very pinnacle of French society through sheer intelligence and force of will (and a little sneakiness, too).

Richard Holmes, The Age of Wonder. This book has received many end-of-year accolades and justly so. It’s a feat of great storytelling as well as a look at a moment of intense scientific change. Holmes focuses on a small group of dedicated Romantic-era scientists, most notably William and Caroline Herschel, Humphry Davy, Joseph Banks, and Mungo Park, all working in different aspects of science.

Michael Holroyd, A Strange Eventful History. A look at the lives of actors Ellen Terry and Henry Irving and their tumultuous families amid the rise and fall of the Lyceum Theater. A long book, but it reads much too quickly–I wanted to keep on with these people after the end of the story! A wonderful look at the world of the Victorian theater and the mind-set of most unconventional people.

Caroline Moorehead, Dancing to the Precipice. Another book about a strong, intelligent woman in times of upheaval. Lucie de la Tour du Pin was born into the French aristocracy and lived a long, eventful life, serving at the courts of both Marie Antoinette and Josephine, traveling Europe with her diplomat husband (who she loved very much), surviving the Revolution (she and her family eventually fled to New York, where they spent 3 years on an upstate farm before returning to France), the years of Napoleon and his downfall, and so much else. The story mixes politics and court intrigues with daily family life. I loved it.

Some honorable mentions: Paul Collins, The Book of William (a look at the history and life of the First Folio). Peter Martin, Samuel Johnson: A Biography. Celia Lyttleton, Scent Trail (the author tracks down the ingredients for her exclusive perfume). Jane Kamensky and Jill Lepore, Blindspot (written in the style of an 18th century picaresque novel–fascinating!). Jonathan Bate, Soul of the Age (a new bio of Shakespeare–with a twist). Wendy Moore, Wedlock (a look at a Georgian marriage that was very disastrous indeed).

I hope you had a great 2009, and will have an even better 2010! (And Carolyn has a contest going on at her blog where you can win 2 books by–me! Comment over there for a chance to win)

Why, yours – of course.
Loved “The Winter Queen”
Can’t wait for “The Maid’s Lover.”
AND, your Laurel McKee “Daughters of Erin” stories. I’m especially eager to read them. LOVE Ireland.

Great list of books! I also loved Soulless and The Guernsey Society. Fantastic reads. I need to let my friend know about Carrie Lofty’s book, as she has some Robin Hood inspiration going on her novel too.

And how have I not heard of The Age of Wonder?! The inspiration for the heroine of my WIP was a friend of the Herschel’s. I need to buy this book. Now.

Congrats on the fantastic review!!!

Stephanie, you definitely need to read “Age of Wonder”! It was fascinating. I also just ordered a book from the Edward Hamilton catalog about Caroline Herschel, “The Comet Sweeper”–have you read it?

Elizabeth, I am making my way through “Wolf Hall” right now! What a great style. And how could I forget the Pauline bio???

Yes yes yes to “The Age of Wonder” and “The Little Stranger.” Now what will I write about???

As for movies, definitely go see “Invictus”. It is the cinematic equivalent of the Guernsey book (which I also loved) — uplifting without being in any way false or saccharine. Morgan Freeman may not win the Oscar for his portrayal of Nelson Mandela, but if he’s not at least nominated, then he wuz robbed.

Susan, “Invictus” is definitely on my movie list for the week. I’m also hoping to see “Nine” and “Princess and the Frog”, and maybe “Young Victoria” again…

Alright, I’m adding that to my list too. I haven’t heard of it. How did I miss all of these in my research?! Thank you again for the suggestions. I’m already spending my B&N gift card in my head. 🙂

Thanks for helping me add a few more books to my must read list.
Hope you have a Great 2010!