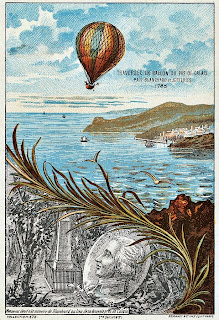 Today’s the anniversary of the first crossing of the English Channel in 1785 by intrepid balloonists Jean Pierre Blanchard of France and Dr. John Jeffries, an expatriate Bostonian. Blanchard had made his first balloon ascents in London in the previous year, and also made some parachuting experiments. Jeffries was the money behind the venture and Blanchard seems to have had a rather ambivalent attitude toward his sponsor. He made an attempt to claim that their combined weight was too much for the balloon, suggesting Jeffries should stay on land, but it was discovered that the Frenchman was wearing a belt of lead weights.

They left from Dover at about 1:00 in the afternoon and landed in France a couple of hours later in a tree outside Calais but the trip did not go as smoothly as planned. The two aviators found the balloon losing altitude and had to rid themselves not only of ballast but any extraneous weight including books, food, scientific instruments and even their clothes, thus becoming the first male strippers in flight. Neither of them could swim.

Heaven crowned my utmost wishes with success: I cannot describe to you the magnificence and beauty of our voyage…When two-thirds from the French coast we were again falling rapidly towards the sea, on which occasion my noble little captain gave orders, and set the example, by beginning to strip our aerial car, first of our silk and finery: this not giving us sufficient release, we cast one wing, then the other; after which I was obliged to unscrew and cast away our moulinet; yet still approaching the sea very fast, and the boats being much alarmed for use, we cast away, first one anchor, then the other, after which my little hero stripped and threw away his coat (great one). On this I was compelled to follow his example. He next cast away his trowsers. We put on our cork jackets and were, God knows how, as merry as grigs to think how we should splatter in the water. We had a fixed cord, &c to mount into our upper story; and I believe both of us, as though inspired, felt ourselves confident of success in the event. 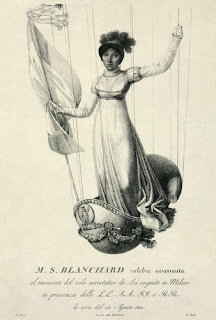 They were both feted, made honorary citizens of Calais and Louis XVI awarded Blanchard a substantial pension. Blanchard continued with his balloon and parachute experiments, including the first American ascent in 1793 from Philadelphia. His wife Sophie Blanchard also made her name as a balloonist. Sadly–or perhaps they appreciated dying with their boots on–they both died in ballooning accidents.

Jeffries, however, never flew again, returning to America and resuming the medical practice so rudely interrupted by the War of Independence.

Here’s a very nice paper cut out model of the balloon (with paper dolls!) on sale at fiddlersgreen.net and more information.

Have you done anything brave, innovative, or just plain daft recently? (and, yes, writing is all of the above).

Well, I did voluntarily skydive out of a plane to celebrate my 40th birthday. Is that daring enough? It was fun I screamed for joy the whole time 🙂

Compared to Kate I have done nothing daring lately. I did apply for my dream job and if I get it it will be a huge change and huge risk for my career, but we’ll see.

I love hot air balloons. I have been fascinated by them ever since I had to make one in third grade. I have never been up in one though. Maybe I should since I turn 30 tomorrow….maybe that’s how I’ll celebrate (besides a trip to NYC and tickets to see Catherine Zeta-Jones and Angela Landsbury on Broadway). I love the scene in the Count of Monte Cristo movie starring Jim Cavezel where he lands at the party in the balloon. That’s really the type of balloon I’d like. The newer versions just aren’t as pretty.

I would have just screamed.

I have to share with you the baloon video I made for my daughter for her birthday. It wasn’t made for commercial purposes but she thought I should put it up on YouTube anyway, so I did:

Lord, Kate, you’re brave. Like Delle I would have been screaming, period. Happy birthday JA.

Ah, well, all I have done recently, today, is clean the bathroom. . . which is none of the above. Or is it a bit brave. Not quite sure. But anyway, that’s as exciting as it gets for me. 🙂

Lois, cleaning my bathroom floor would be brave, but that’s more a reflection of my hygiene standards than anything else.

Cool balloon paper doll! I love paper dolls. And hot-air balloons. In theory, anyway, and when used by folks like Terry Gilliam in Baron Munchausen.

The naked aviators is a hilarious story. Thanks for posting it.

Happy Birthday Jane Austen! And Kate P. what’s on the agenda for the next milestone birthday? 🙂

Brave, Kate! Very brave. I wouldn’t have screamed, as I think I more likely would have passed out.

Thanks for sharing the great story! There’s something about reading a person’s own words about an experience that makes it more real somehow.

As to doing something brave, innovative or daft, it’s been a while, though I’ve done a fair bit of traveling entrusting my person to the care of folks I’ve met online. Great experiences every one.

I did almost go up in a balloon with Kathy Caskie. We were going to use it as a promo thing but every time we tried, there were thunderstorms in the area. We were able to get photos at a balloon launching but there was no room in the balloon for us.
We finally gave up—-to my great relief!

I forgot to wave to Judy!!! (waving madly)

Delle, love the video! The illustration at :27 is Blanchard and Jeffries’ balloon, with the wings and fin that were abandoned mid-Channel, when the aviators realized they had no practical function and were merely extra weight.

When I was younger and dumber (late twenties, early 30’s and even early 40’s) I did some really dumb things. I went mountain climbing in the Austrian Alps. I didn’t think it was stupid until about halfway up Mt. Kehlstein when I paused to look around and realized the clouds were BELOW us. And the only thing holding me on the mountain was my deathlike grip on the rocks and a rope tying me to two German professional climbers. I look back and think “What was I thinking?”

Been hang gliding off the coast of Spain. No big deal until you realize I was gliding out over the ocean and I can’t swim.

I went bungee jumping on a dare from my students. If I did it they had to read two Shakespeare plays per semester instead of one. They couldn’t believe I did it and frankly neither could I. But it was really kind of fabulous!

Now the only dangerous thing I am doing is trying to become a published historical romance author. Scary stuff!