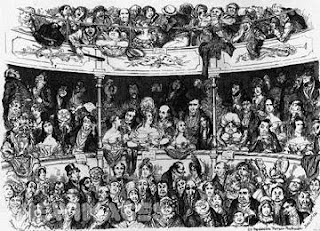 I was always taught to be quiet and respectful of others during movies and especially at live performances (unless they are the sort that invite audience participation).

Yet I’ve been surprised, at my children’s last few school concerts, to find that parents of similar age to myself will chat through the performance, maybe shutting up only when their own child is featured. Although most of the audience members at the local Binghamton Philharmonic concerts are well-behaved, I sometimes hear people humming along or crackling candy wrappers at untoward moments. While I will practically burst my eyeballs to hold back a sneeze until a break between movements!

I’m noticing this sort of thing a lot more in movie theatres, too. And it’s not children or teenagers who seem to be the worst offenders; it’s adults who seem to think everyone around them should be delighted with their running commentary on the film. If you try to shush them, they behave as if you are the one being rude. I googled around a bit and found that audience behavior seems to be a growing problem, at all sorts of entertainment venues. For instance, the San Diego Opera has posted a set of Golden Rules of Opera Etiquette to try to address it. 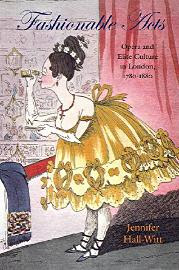 But maybe I’m not so old-fashioned. During the Regency and earlier periods, the theatre and opera were places to see and be seen. People socialized and often didn’t pay much attention to what was going on on the stage, unless they were heckling the performers or throwing something at them!

Yet at some point this changed. In my googling around, I ran across a book called FASHIONABLE ACTS: Opera and Elite Culture in London, 1780-1880. A review by OPERA America Newsline states that “In a reassessment of British aristocratic culture, Jennifer Hall-Witt demonstrates how the transformation of audience behavior at London’s Italian opera – from the sociable, interactive spectatorship of the 1780s to the quiet, polite listening of the 1870s – served as a barometer of the aristocracy’s changing authority.” It looks interesting–even if the review makes my way of behaving at performances sound so stodgy! Has anyone read it?

So do people talking through movies, concerts, plays, etc…, bug you, too? Why do they do it?

I think my two worst experiences were in movie theaters. At the first Harry Potter I had to listen to a grandmother and her grandson say” This wasn’t in the book” “This wasn’t in the book” and so on. At the second Lord of the Rings movie this four-year-old kicked my chair the entire time. He was sitting by himself and when I asked him to stop his parents who were eight rows back from him got very upset. I don’t think four-year-olds should really sit by themselves. Maybe that’s just me.

Elena, I remember once I was at a movie that was probably rated PG (can’t remember what movie) and some 12ish boys were giggling through the more PG parts. I leaned over and said, “If you aren’t adult enough to watch this movie you should leave.”
They shut up.

I looked up that book, Fashionable Acts, but it is expensive, even used! (Just what I need..another book- I’m going to blog about cataloguing my book collection on Monday)

Here in England people eat and drink throughout the cinema performance. They even get up and go out for more snacks during the performance. And, yes, they also chat. I wonder if this attitude is due to having the TV at home as a kind of background? Result – I scarcely ever go to the cinema. I’m with you all the way, Elena, on consideration of others in a public place of entertainment.

I try to go to late showings whenever possible at the cinema, to avoid the teens and younger kids. But even then you can find people bringing small children out late at night. Astonishing!

Other adults talk too, yes, though it’s mainly couples at late night showings, and they just stare moonily at each other or sit there in silence because it’s a first date!

Luckily the films are so loud, I can’t hear the other people except in the quiet bits!

Once at the movies, a kid (10-12) behind me was very actively kicking my seat. I politely turned around and asked him to stop, whereupon his father stood up and physically threatened me. I asked him what he was going to do and he sat back down, fuming.

I now go to the very earliest movie showings because they’re cheaper and few other folks go.

I am sometimes very ashamed of my generation. There definitely seems to be a movement away from a civic, we-all-create-this-together consciousness to one where each individual is the center of his or her own universe. It’s to the point now where people are afraid to chastise others for such behavior as cutting in line. You never know who’s packing.

I agree, the rudeness may be part of being used to cocooning at home with the TV and forgetting one is out in public.

Maybe it goes along with people wearing PJs out. I can sort of get teenagers doing it, but I’m with Stacy & Clinton of What Not To Wear–adults wearing PJs outside their homes risk looking like they’ve escaped from some institution or other. OK, now I have branded myself as hopelessly out of date. 🙂

I’ve read the book and found it fascinating. The movement from opera as a cocktail party with music in the background to the civilized act of watching a musical masterpiece with the silence and attention it deserves (says the retired opera singer) was not something that happened overnight and this book definitely covers the subject with an emphasis on the sociology of it all. Great book.

I am utterly intolerant of people who disturb others during a performance for which the other patrons and I have paid good money to see.

I once turned around and threatened to throw a man’s cell phone into the lobby if it rang and he answered it one more time. My niece and nephew were MORTIFIED, but it allowed us to watch the rest of The Fellowship of the Ring in peace!

The truly amazing thing about opera performances in Europe is that people of all ages and all walks of life attend (ever seen a teenager with a purple mohawk a the Met? I saw several at the Festspeilhaus in Salzburg.) And these people, sometimes children of no more than ten years of age sit in rapt attention, cheer and clap at all the right places and generally make performing for them a real pleasure. However, if your performance is less than what they expect they WILL let you know loudly, but without the expected throwing of vegetables and fruit. They’re too expensive to waste on bad opera!

Kicking, crackling, and particularly texts (which can be downright blinding in a dark movie theater) definitely bother me, but I tend to be more forgiving of humming.

This may have to do with my experience with my grandmother, though. She had Alzheimer’s for the greater part of a decade and towards the end could barely communicate with anyone. But she LOVED to see musicals on TV or live. And that was one of the few times I got to spend time with her and KNOW that I was making her happy. When we went to the theater to see a show (always Sunday matinees at smaller community theaters), she would hum along and snap her fingers and sometimes try to sing – and we used to get just the nastiest looks from those sitting around us. One person even asked us to leave.

While I generally do my best not to disrupt a show, it was really sad for me that people couldn’t be a bit more understanding of an old woman enjoying herself. So I always try to tamp down irritation when it comes to the humming at least :).

Yes it does bother me. I think people in general have become rather self-important and feel they are entitled to do as they please. In addition to that, manners don’t seem to be taught much anymore.
Unfortunately, the focus in societry seems to be “I” and “NOW”. If it bothers you, that is your problem, but “my” needs/wants are more important, no matter what. Why else would so many cell phones be going off during church, movies, class, etc.

Yes it does bother me. I think people in general have become rather self-important and feel they are entitled to do as they please. In addition to that, manners don’t seem to be taught much anymore.
Unfortunately, the focus in societry seems to be “I” and “NOW”. If it bothers you, that is your problem, but “my” needs/wants are more important, no matter what. Why else would so many cell phones be going off during church, movies, concerts, class, etc.

I hate people who talk during a movie almost more than the people who turn on their cell phones. My God, you can see the white glare 20 rows away.

I have told talkers to hush, if a pointed look doesn’t work. Once I dumped my drink on some clown behind me who thought he was funny to throw stuff at my head. That stopped him.

I have a mean streak.

Librarypat, My parents sent all four of her children to manners camp when we were younger. We learned appropriate conversation, table settings, eating meals among other things (like writing thank you letters). It was very interesting and has helped out a lot.