Happy Tuesday, everyone! I missed you last Tuesday (thanks to Angela James, Carina Press, and Megan for filling in!), but I have been thinking about many things this week. Among them are:

Author copies! I got a box full of Countess of Scandal this week, and have been ogling them ever since. So pretty! So shiny! So purple! I’ve been working on this book for a long time, but somehow nothing seems quite “real” until I hold a copy in my hands. It releases on January 26, and I’ll be doing a launch party and giveaway here at the Riskies on January 30. Join us for a chance to win one of these very copies! 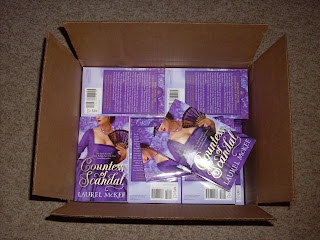 Birthdays! Mine was Friday, and there was cake (Italian cream!) and presents, including this Hello Kitty watch (in its equally fab Hello Kitty box!). It makes getting older a little more fun. 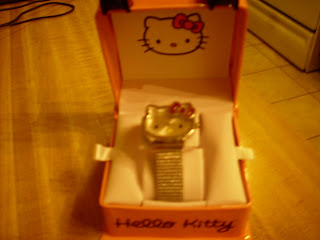 And new book covers! This one is for the US release of To Catch a Rogue, Book One of “The Muses of Mayfair” (in April!) I’m so excited to see these books coming out here, and I love that you can see the actual Grecian statue from the story in the background of the cover. I haven’t seen the covers for the other two yet, or for the “Undone” story that will be out in March to launch the series (To Bed a Libertine), but stay tuned. 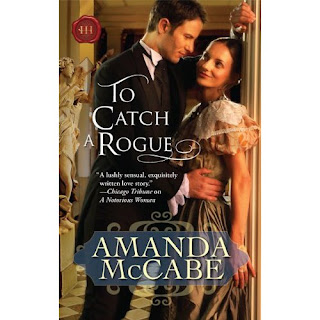 I also avidly watched the Golden Globes red carpet arrivals (though I forsook most of the ceremony in favor of Return to Cranford!), and am talking gowns on my own blog today…

And now for today’s regularly scheduled post, which was actually meant for last week! I had started it, but didn’t feel up to finishing it yet, so here it is just a bit late. I’m not much of a cook, but I do love to eat (as well as watch the Food Network and Top Chef)! And I love the history of cuisine. I enjoyed Ian Kelly’s book Cooking for Kings: The Life of Antonin Careme, the First Celebrity Chef. As I read it, I couldn’t help but imagine him as the snarky judge on an 18th century Top Chef. And January 12 was the anniversary of Careme’s death, in 1833. 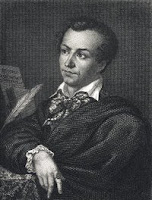 The man who came to be known as “The King of Chefs, and the Chef of Kings,” one of the first internationally known “celebrity” chefs, didn’t have a promising beginning. He was born in Paris to poverty-stricken parents in 1792, at the height of the French Revolution, and grew up working as kitchen boy in cheap cafes for his room and board. In 1798, he came to be apprenticed to the famous patissier Sylvain Bailly, who had a fancy shop near the Palais-Royal. Careme became famous for his pieces montees, elaborate subtleties several feet high made entirely of sugar, marzipan, almond paste, and other sweets in the shape of temples, ruins, pyramids, all the things antiquities-mad society loved. Bailly displayed these in his shop window, and Careme gained more fame for creating delicious sweets such as gros nougats and croquantes (made of almonds and honey).

In the meantime he branched out, doing work for the famous politician and gourmand Charles Maurice de Talleyrand-Perigord, who recommended him to other members of the highest Paris Society, including Napoleon (he would do the wedding cake for Napoleon’s second wedding). As he found more work, he expanded his creative repertoire from pastries to main courses and especially sauces, which would transform French cuisine. In 1804, Talleyrand moved to the Chateau de Valencay and hired Careme full-time to cook there (after a test: create a whole year’s worth of menus, without repeating a dish, using seasonal produce). He succeeded admirably, and created a new way of cooking in the process, using fresh herbs and vegetables and simpler sauces with fewer ingredients and better flavors.

After the fall of Napoleon, Careme went to London and worked as chef de cuisine to the Regent. He then traveled to Russia to work briefly for Tsar Alexander I. He ended his career as chef to the wealthy banker James Mayer Rothschild, and died at age 48. He was buried in the Cimetiere de Montmartre with honors. He’s credited with numerous things, such as inventing the chef’s toque, replacing the service a la francaise (serving all dishes at once) with service a la russe (serving each dish in a course), and creating sauces that are still the basis for classic French cooking. He wrote several cook books, especially the enormous L’Art de la Cuisine Francaise (5 volumes, published between 1833-34), which included hundreds of recipes, plans for menus, table settings, a history of French cooking, and steps for organizing the kitchen. 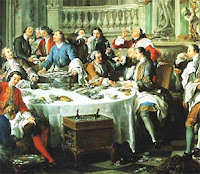 If you’d like to try one of his recipes, there are several in the back of the Kelly book! Here is a nice simple one (albeit modified), Fromage Bavarois Aux Noix Verts, created for the Brighton Pavilion in 1817:

Take 25 peeled walnuts, and pound with one pint of cream and eight ounces of sugar. Leave to infuse for an hour, and then add the isinglass and set it to cool in the fridge for half an hour. When still not set, stir in a pint of thickly whipped cream. Set it immediately into a jelly mould and leave overnight.

What have you been thinking about this week? Who is your favorite celebrity chef or French meal? 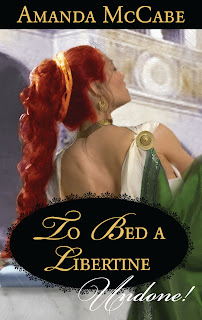 Just this morning I was thinking about France!I had a croissant for breakfast. It actually prompted me to remember the first time my husband and I went to Paris and got our “continental breakfast” delivered to our hotel room. I’d never eaten a croissant before, never tasted such sweet butter or such delicious coffee. This morning didn’t come close. 🙂

Wasn’t Return to Cranford fabulous? I love the sight of all those mature actresses in one place, acting their assets off.

Your books are beautiful!

Earlier this weekend my best friend and I were gushing about the Countess of Scandal covers. So beautiful! And the others are stunning.

I only wish Cranford could have gone on longer. I watched the pre-Globes shows so I could devote my attention to Cranford.

Interesting tidbit about the chef. Thank you for the history! I really enjoy Barefoot Contessa shows in terms of celebrity chefs. I don’t know why I’m so drawn to her and the show but there it is…

I love Top Chef! Interesting that Careme had to do a Top Chef type of challenge, big time!

I also love the cover for To Bed a Libertine!!!

I missed the Golden Globes AND A Return to Cranford, but since I’ve never seen Cranford, I’m really behind.

Glad to have you back! And by the way, Happy Birthday.

Those covers are gorgeous. Are you going to build a fort with them? I would.

Amanda, what beautiful covers. You do seem to have a thing for muses, which is wonderful. I like when Greek mythology infuses with other time periods much like Percy Jackson and such. I wrote my own play when I was 14 that had a little Greek influence. It explained how we got the sun, the moon, the northern lights, the eastern star and eclipses. It was called The Sun Maid and Aphrodite had a major role. I will look forward to reading Countess of Scandal and your other books. I do hope your muse books will come out in an e-version. I want to get them for my Kindle.

LOL Maggie! I kept thinking about Paris, too, as I pulled together the post. I had such a wonderful time there last year, and ate so much great food. At the hotel, they served fresh croissants, baguettes, and (my favorite) pain au chocolat every morning, and in the afternoon I would go to the patisserie across the street and have a chocolate eclair. It was unlike any eclair I have ever had before, it was heavenly! By the end of my stay the lady at the counter would wrap it up as soon as she saw me in line, and when I told her I had to leave and would miss her eclairs, she gave me a free one. :))

Stephanie, I definitely agree that “Cranford” could have gone on even longer! I wish it could have been a 3-parter like the original, things felt like they were just galloping along. I did love it, though, despite a couple scary moments (I was sure poor Harry was a goner!). And I like the Barefoot Contessa, too–her parties always look like so much fun

Carolyn–a fort!!! I hadn’t thought of that, what a great idea 🙂

JA, I’ve always been very interested in mythology and ancient art, which luckily corresponds well to the Regency period, too. 🙂 I think I put a lot of myself into the Chase heroines.

I thought the title for Return to Cranford should have been a Very Cranford Christmas! Although I thought the plot was just a retread of the first series I adored it, the costumes, the setting, the manners, I think every historical romance author who writes Victorian set books should watch both series and Lark Rise to Candelford.

I can’t wait to read all your books that are coming out this year. 2010, the year of Amanda McCabe.

Ooh and I love Anthony Bourdain and Nigella Lawson. Either of whom should sit at judge’s table on Top Chef rather than Toby Young.

So I’m going to butcher this and I could google it, but I think I would be afraid to go against Alex Gornesheli. She is always so mean. I always feel like food judges are much like the Hound of the Baskervilles who was starved so he was vicious. I think they starve the food judges before they eat. I could be wrong, but they are mean.

Happy Belated Birthday to you! Amanda I love the cover of your new release! The purple is so pretty and shinny, sounds awesome! Thanks for sharing!

And I have to go eat lunch, I am starving, thanks to you. No Regency jello, sadly.

Elizabeth, “Lark Rise to Candleford” is on my Netflix list–maybe I need to move it up. Ooooh, and “Emma” is on this Sunday! So excited!

Your blog reminded me of a BBC show, Supersizers, with the Times’ food critic Giles Coren and TV commedian Sue Perkins. They “reenact” time periods in British history, including meal preparations for house parties. I just happened to be in England, watching TV after a grueling day of castle climbing, when the Supersizes featured the Regency period. In true fashion, Giles and Sue dressed the part and gorged themselves on food we would probably not eat today.

The books look great–and it’s even better that YOU are pleased with them (I gather authors aren’t always consulted). I’m not much of a celebrity chef girl, but I do love French food! I have some beef burgundy on the stove right now……

The covers are lovely. About the only cooking shows i ever watched consistently were Julia Childs and Jeff Smith. Both have been off the air for years. They were pleasant, fun, and had good ideas. I don’t care for the competitive, loud shows that are on now.
I find it interesting that there were celebrity chef so early on. I know the wealthy competed for good cooks, but didn’t realize they could rise to that status.