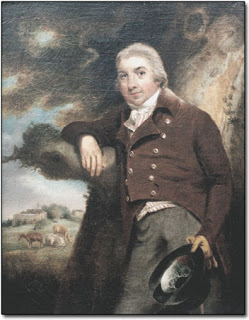 Smallpox was a terrible disease, now eradicated, that killed one in three of those who caught it and could severely disfigure anyone who survived. Yet folklore, as Jenner knew, held that milkmaids or others associated with cows, caught a minor form of the illness (cowpox) which seemed to protect them from smallpox. Lady Mary Wortley Montagu, during her time in Constantinople, became a convert to variolation, an early form of vaccination, and brought the practice back to England. There were several other contemporaries of Jenner’s, including a Dorset farmer who successfully vaccinated his wife and two children, who were thinking along the same lines.

In 1796, Jenner tested his theory by inoculating an eight year old boy with material from the cowpox blisters of milkmaid Sarah Nelms, who had caught it from a cow named Blossom. Blossom’s hide hangs in the library of St. George’s Medical School, University of London–sadly, I could not find a picture. 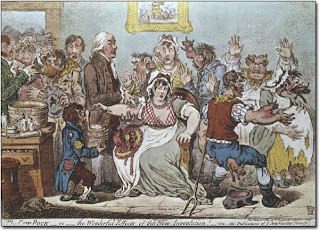 In 1801 James Gillray produced this cartoon of the Smallpox Inoculation Hospital in St. Pancras, London.

And here, yuk, is the arm of William Pead, from an 1800 engraving, an illustration used by Jenner in An Enquiry into the Causes and Effects of the Variola Vaccinae.

Jenner named the procedure vaccination from the Latin word for cow, vacca. 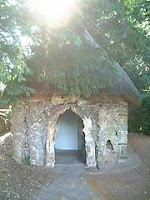 His home in the town of Berkeley is now a museum. This is his Temple of Vaccinia in the grounds. The museum has a petition to sign to return Jenner’s statue to Trafalgar Square this year to commemorate thirty years of the eradication of smallpox, so if you’re a UK citizen, please sign it!

I’m having trouble thinking of an appropriate followup question. I don’t want to know about any pustules you may have developed and I doubt many of us own cows so I can’t ask you the name of your favorite cow.

So, how about inventing a bit of dialogue for Jenner and his milkmaid, Jenner and his cow, or someone about to receive a vaccination without knowing exactly what is involved, such as:

“Just a little prick, my dear.”

The one I like best will receive a prize, a truly dreadful collection of the plots of Austen’s novels in verse, that I was sent by my favorite ex-sister in law in England, who probably acquired it at a church jumble sale. It is signed by the author.

I will have to think of something clever, but as a side note: you can purchase the letters of the Honorable Lady Mary Wortley Mantagu for your Kindle as the very reasonable price of nothing.

Had heard bits and pieces of this medical milestone before, but never really thought about the origin of the word but it now strikes me as funny. Here’s a hypothetical question for you:

‘Have you been cow-inated for the swine flu yet? And when will they develop a cow-ination for the bird flu?’

M: Can you be cow-inated against mad cow?

And this whole conversation makes me think of this death in Wales several years ago. A lunch lady was trampled to death by a heard of cows as she walked through their field to get home. I always wondered if the cows were thinking : Do that with my meat will you? Take this.
But on the whole a very tragic story and a very unpleasant way to die.

Janet, the download to get kindle on your computer is free. Not the exact same, but you could still download the fun free books.

Jenner: “Thanks so much for your willingness to help, Sarah.”
Sarah: “I am glad to help.”
Jenner: “Open wide for me, Sarah.”
Sarah: ” Now sir, I said I would help but this is too personal.”
Jenner: “Sorry miss, I meant open your mouth wide so I can access your throat.”

* hope I’m not stepping over the line. This is all I could think of.

good for you, robynl!
Janet scared me off by being so clever herself. I’m too cowardly to try.

And I’m glad that smallpox was eraticated. I can’t imagine how awful it would be to be pock-marked.

Love this post!
Cool pictures too. The Kindle isn’t cheap, but it’s now under $300 which is better than it used to be. I bought my mother one for Christmas and both my parents are pretty thrilled.

My mother has arthritis that makes it hard for her to hold heavy or thick books.

Hi, I do believe this is a great web site.

I stumbledupon it 😉 I will return yet again since I saved as a favorite it.
Money and freedom is the best way to change, may you be rich and continue to help others.