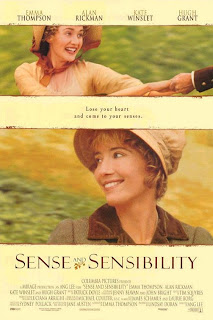 This past weekend, our Washington (DC) Romance Writers workshop was a discussion of Jane Austen’s Sense and Sensibility, both the book and the Emma Thompson movie, led by our very own Austen scholar, Kathy Gilles Seidel.

In addition to having a Ph.D in English, Kathy has won every romance writing prize you can think of. She was the speaker at the very first WRW meeting I ever attended, talking about endings. I was enthralled and so very impressed. Kathy continues to impress me at every WRW Retreat where she is our opening speaker. Her talks are always intelligent, literary, accessible, and very practical.

Here are a few of her gems (more or less direct quotes):

“Your opening should be consistent with the overall tone of your book.”

Originally, the S&S movie was going to start with a bloody fox-hunting scene in which Mr. Dashwood falls from his horse, but the tone would have been all wrong.

“If you have a character whose virtues are not appreciated, and you want the reader to invest in him, have a character criticize him.”
This was about Edward. Kathy felt that Emma Thompson improved Edward as a hero in the movie.

“Secrets are fabulous. Secrets keep readers reading.”
This was about Edward’s secret betrothal.

“Restraint is cool and sexy.”
A response to Alan Rickman’s portrayal of Col. Brandon! But we already knew Alan Rickman was cool and sexy in the role, especially when he says, “Give me an occupation, Miss Dashwood, or I shall go mad.”

“Books are all about the connections between people.”

I don’t remember the context, but I love the quote.

Kathy pointed out that the minor characters in the movie often provided the movie’s “feel good” moments and that it is important to think about “how readers will respond to minor characters.”

Kathy also pointed out that the point of “Ritual Death,” the “Black Moment” should be an “alternative to the happy ending,” the point where the character has to believe nothing will work out.
In S&S, the scene where Elinor believes Marianne is going to die is the Black Moment. Everything has gone wrong. Willoughby has abandoned Marianne, Edward is to marry Lucy, and Elinor is about to lose her sister.

I wish I could reproduce the discussion that led to these pieces of wisdom. All I can say is that it was stimulating and fun.

When you are reading, do you notice these things in the book, or do you just get lost in the story?

Try Kathy’s latest book about the mother of the groom, Keep Your Mouth Shut and Wear Beige.

Take a look at my website, with its new stuff and new contest. If you missed some of my early books they are being re-released in the UK. February is The Wagering Widow and March is my RITA winner, A Reputable Rake. See details on my UK page. Remember, Book Depository offers free shipping (and both are sold at discount)!

And while you are on the Book Depository website, also pre-order Janet’s February UK release, Improper Relations. I’m reading an advance reader copy and it’s fab! (and there’s a 53% discount on it!)

I love these pieces of wisdom. 🙂 Thanks for sharing.

I loved S&S, both the movie and the book. Edward and Elinor’s relationship… So sweet. And Alan Rickman…. *le sigh*.

C.S. Lewis said “We read to know we are not alone.” Reading is an interactive experience. The writer and the reader reveal a great deal about themselves. There are books I’ve disliked so much I’ve thrown them away. I know never to buy another book by that author, but I also realize that there are others who loved it. There are also authors that I buy everything they write, but others don’t care for them. After the disappointment of a recent writing contest, a friend of mine reminded me that it’s impossible to please everyone, so please yourself. Now, that’s all well and good, until you try to sell it. LOL!! You have to have a sense of humor!

Thanks for the shout out on Improper Relations, Diane!

I believe S&S was the only Austen movie (so far) to have got the clothes right and I thought it was a pretty good adaptation. What did Kathy say about Emma Thompson’s script fixing the problems of S&S, Diane?

This would have been a very interesting seminar to attend. I do think that the Emma Thompson S&S has the best Black Moment…..it is so heart-breaking and yet understated. I want to cry. I do, however, find that I liked things in the newer S&S as well. S&S is not my favorite Austen novel, so I’m not as well versed in it.

On a personal level I find that I sometimes relate with characters that other people don’t. Liza Palmer wrote this book Seeing Me Naked, which I read 15 times in three days and actually changed my entire life because. I broke up with my boyfriend of five years, quit my job and went to grad school full time. It was scary, but I needed to make that change and this book led me to it. I have since read what other people think of the book and they don’t like the main character. They think she’s cold and selfish and bitchy. I didn’t see that. I saw a woman who came from a family where a lot of pressure was put on her because of who the family was and I understand that completely. Where I come from it means something to be part of my family and people expect a lot from you because of it. It is not easy and in this character I found someone who understood and went through the same thing.

You never know what will attract a reader and what will repel them. It’s all a game and I think that age old saying you can’t please all of the people all of the time rings very true for writing.

Judy, I totally agree with you. I also urge you to take contest feedback with a huge grain of salt, because sometimes the contest judges just don’t “get” it.
If the feedback makes you see something you didn’t realize before in your writing and it makes you slap your head and say, “Why didn’t I think of that?” then incorporate those changes. Don’t ever change something just because a contest judge told you so.

About Kathy’s talk, Janet, I came in a bit late so I don’t know if Kathy discussed Emma’s cuts in characters, but she did point out how Emma used Margaret to give Edward some personality. She saw Austen as weak in showing us why Elinor fell in love with Edward. She thought Emma Thompson used the minor characters to provide “feel good” moments in the film, while in the book Austen used them often for satire.

Jane Austen, I did cry when Kathy showed the clip of the Black Moment. What a wonderful acting job Emma Thompson did!

I think it is thrilling to think that a book can resonate with a person as strongly as that book did with you. Bravo! Fiction can be so powerful.

What great words of wisdom! I would love to have attended her presentation. I do love Emma Thompson’s S&S ! I’ve always been fascinated with the permutations we go through to figure out where to begin a book. It seems so simply, but there really is a wrong place and right place for a story to begin so that you immerse the reader in it right away. Sometimes it is devilish hard to see!

Trying to remember Kathy Seidel’s definition(s) of the BBM and the Ritual Death–I thought they were two separate things: the Ritual Death is a sort of holding period after the BBM when it seems that things are still unresolved. It’s a return to the real world but as a changed person. In Elinor’s case, this would be when she’s back at the cottage but before Edward returns.

Altho I found it very moving when Elinor broke down in this version of S&S I loved the old BBC one where everyone bursts into laughter at his announcement that his brother married Miss Steele.