Today is going to be a Miscellaneous Day, since I’m totally distracted with wrapping up the WIP and getting back into the day-job schedule, etc. Here’s what else I’ve been thinking about lately:

1) More covers! Just got this one for Duchess of Sin, the second “Daughters of Erin” book, which will be out in December. I love the red and gold colors, the dress, the holly! Speaking of the “Erin” books, Amazon says Countess of Scandal is shipping today, and it’s been spotted in some bookstores (sadly, not here yet!). I am so excited I can’t stand it!! We’ll be having the launch party (with giveaways) this weekend here at the Riskies.

2) The new Emma on PBS! I have read complaints of the series and Romola Garai’s performance, but I think if parts 2 and 3 continue on the same way she will probably be my favorite Emma. I like both the Paltrow and the Beckinsale versions (aspects of them both, anyway), but Emma is such a delicate balancing act, a perfect mixture of sweetness and acerbic wit that makes the story of the book just right. Paltrow leaned more to “cuteness” (as did the secondary actors), Beckinsale to crankiness (and fugly hats), where Garai has a little more of the mix down. Sure, Emma is spoiled and arrogant and bossy, but she’s also kind, well-meaning, and fun to be around, which is what makes (almost) everyone in Highbury love her and want to be around her. So I’m liking this Emma a lot.

I also wholeheartedly approve of the houses and costumes (especially love Emma’s coral-red dress with the teal-green sash, and all her pretty shawls). I was doubtful of Jonny Lee Miller as Knightley, but am coming around (the chemistry between Emma and Knightley here is palpable, which helps!). Miss Smith is pretty, sweet, and dumb as a box of rocks, as she should be, and Elton vain and silly, as he should be (can’t wait to see Christina Coles’s Mrs. Elton! She was such a good wicked-snobby Blanche Ingram in Jane Eyre). I’m not sure Michael Gambon is not a little too robust for Mr. Woodhouse, but he’s good as always, and Miss Bates is excellent in the way you can see the despair behind the cheeriness with just a look. I wish Jane Fairfax was a bit more charismatic–as it is, I’m not sure why everyone is so interested in her. And Frank Churchill (aka Margaret’s whiny brother from North and South) is a dud. But I’m enjoying this version a lot, and am so glad Emma finally got the series treatment, instead of cramming it all into 2 hours! (Now if they would just do the same for Mansfield Park)

3) Yesterday in history–Henry VIII and Anne Boleyn were married in a secret ceremony at Whitehall Palace in 1533. Er–happy anniversary? 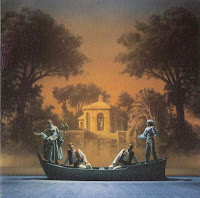 And today in history, Mozart’s opera Cosi fan tutte had its premier at the Burgtheater in Vienna in 1790. The cast at this performance was Adriana Ferrarese as Fiordiligi, Luisa Villeneuve as her sister Dorabella, Francesco Benucci as Guglielmo, and Vincenzo Calvesi as Ferrando. It’s theme of “fiancee swapping” didn’t in the least offend the sophisticated Viennese audience, but it was considered quite scandalous in the 19th century and was rarely performed until after World War II. Now it’s on Opera America‘s list of the 10 most-performed operas.

So, to sum up: Covers, book releases, Emma, ill-fated weddings, and opera! What did you think of Emma? What’s your favorite opera? (Mine is Mozart’s Marriage of Figaro, or maybe Tosca). And what’s your favorite ill-starred couple of history???

And I think I need to catch the new Emma. I missed it but it seems to be what everyone’s talking about. It’ll be fun to compare with the Beckinsale and Paltrow ones.

Congrats on Countess of Scandal!!

I restrained myself from blogging about Emma, because I knew you would, Amanda, and would do it so much better.

Now that you mention it, I agree with your assessment. My one concern is that Johnny Lee Miller just doesn’t look 16 years older than Emma! But your point about the chemistry between them is a good one. It helps make their eventual falling in love less icky by our modern standards.

Of opera, I decline to comment, having so little knowledge. I do appreciate it more than I did when I was 16, and I’d much rather listen to opera than some of the rock music of today, old fogey that I am!

I did not make it through the entire Emma, but did like what I saw. I think the whole age thing is tricky when turning Austen novels into movies…obviously Emma Thompson and Kate Winslet were not actually the proper ages for Marianne and Elinor, yet I think one would be hard pressed to find people who do not think it is one of the best versions of S&S around.

The book covers are beautiful and I wonder when you write as Laurel McKee do you dress differently than Amanda McCabe? Do you perhaps wear a wig or style your hair differently? How can you keep your identities apart? (Although I’m sure it’s not quite the stretch that JD Robb and Nora Roberts have to go through). 🙂

I know little of opera. I’m much more a ballet kind of girl. So my favorite ballet was The Great Gatsby, which I saw 16 years ago and still remember so well. The funny thing is the dancer who played Wilson was such a perfect Wilson that when I was in class years later speaking about The Great Gatsby I said something about Wilson being African-American because the dancer who played him was. My teacher had seen the ballet and knew what I was talking about, but did tell me that Wilson wasn’t African-American.

As for Anne and Henry? Well in my life today would have been a more fitting wedding day for them since this is my dark day of the year, but as far as Anne, really didn’t she know a little of what she was getting? Perhaps not the head chopping off bit, but the sleeping around and wanting other women.

I love, love the cover for Duchess of Sin. It looks awesome. And I can’t wait to dive into Countess of Scandal. As for Emma, I agree about Romola Garai and Jonny Lee Miller. I was surprised at how palpable the chemistry was between the two of them. And I agree about Jane Fairfax. I really liked Olivia Williams in the Kate Beckinsale version but thought Polly Williams was a little too old and busty for the part in the Gwyneth Paltrow version. Loved this Mr. Elton. I’m hopeful that the rest of the series will be just as good. Certainly a step up from the Mansfield Park and Persuasion of last season.

“I was surprised at how palpable the chemistry was between the two of them.”

It definitely made the Emma/Knightley relationship work in a way I hadn’t seen before! (at first I worried he might seem too young for Knightley, but I read somewhere he is actually 37, the exact same age as Knightley, so that’s okay, LOL).

JA, I do need to get a special hat to wear when working on the Laurel books! Maybe with giant plumes and streamers…

I haven’t seen this Emma yet, so I can’t comment on it! Color me frustrated. 🙂

I do like Romola Garai from other things, so I’m looking forward to seeing her performance. Of previous Emmas, I liked the Paltrow version better than the Beckinsale version, and probably Clueless better than either. 🙂 I also liked Doran Godwin in the 1972 version (haven’t seen it in a long time…my main memory was that I liked her performance quite a bit, but the overall production wasn’t exciting, though better than the early Persuasion or MP.)

Cara, you cut me to the quick! Not liking the earlier Persuasion!? That is by far my favorite. I think it does more justice to the storyline than the other two. Although there are parts I like about the other two as well. I actually wrote an entire blog post creating my Persuasion all time team….who and what I would choose for my perfect Persuasion:
http://janeaustenregrets.blogspot.com/2009/01/persuasion-fantasy-team.html
I know most people prefer the Amanda Root version, but for me Bryan Marshall will always hold a special place in my heart.

Wow, Jane Austen, so good to finally meet someone with something good to say about the 1971 Persuasion! Because I always like to hear different opinions…

My basic reaction to that production was that the hairstyles were horrible (and so obviously not period) and that everything else was just rather dull. But I see from your blog post that the Wentworth and Anne from that version were your favorites. (I’m glad you liked Fiona Shaw and Simon Russell Beale, BTW! So no need for pistols at dawn…)

I do own it on DVD…maybe it’s time I took another look at it!

I feel that no Persuasion version has really had good hairdos at least for Anne. In the 1971 version I do think Elizabeth’s hairstyle was actually more appropriate for the time. I think I like the version because it takes more time with the story. It shows more although not everything. But I always like to hear others opinions and I haven’t actually met anyone else who liked the 1971 version.

Haven’t seen the new Emma yet so I will reserve judgment.

LOVE both of your new covers. Gorgeous colors and beautiful artwork. Can’t wait to get my hands on them!

You DEFINITELY need a different hat for each of your writing personnas!

Favorite opera? Now that IS a tough one. Love anything by Mozart and have performed most of his works. Mozart was my bread and butter for years.

The most fun I had singing opera is a tie between Lucia in Lucia di Lammermoor and the title role in Alban Berg’s Lulu.