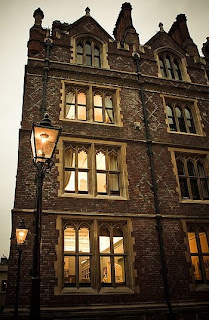 Today’s the anniversary of the first public gas lights in London in 1807, which illuminated Pall Mall. Or possibly not, because according to this article in The Times, the two-hundred anniversary was celebrated on June 18, 2007, when a lamplighter, using the traditional pole, lit a lamp on Pall Mall. In 1985 a timing device was introduced to light the lamps, maintained by a team of six lamp light attendants. London has 1600 remaining gas lights, mainly in the areas of Buckingham Palace, St James’s Palace, the Palace of Westminster, Westminster Abbey and the Mall. Here’s one at Lincolns Inn.

For some other really gorgeous pictures of gas lights, visit urban75.org.

The possibilities of using coal gas to illuminate buildings and streets was not a new idea. In 1735 Dr. John Clayton of Wigan entertained his friends, and then the members of the Royal Society, by capturing “the spirit of coal” in animal bladders and then setting them alight (boys will be boys). In 1792, William Murdoch (or Murdock) refined the method of capturing and controlling gas and illuminated his house in Cornwall. The technology was first seized upon by industrialists who saw it as a way of expanding the workday and their profits, and then applied it to lighting the streets of cities. 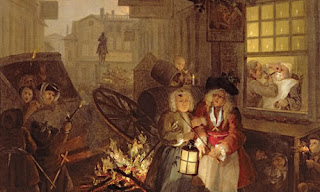 London, like all large cities of its time, was a riotous and dangerous place, riddled with gangs and criminals. The only protection, other than footmen for the wealthy, were the night watchmen, ineffective and figures of fun. So the idea of illuminating the mean streets caught on worldwide. France experimented with gaslights in 1801. In 1812, the London and Westminster Gas Light and Coke Company used wooden pipes to light Westminster bridge in time for New Year’s Eve, 1813. You can read the transcript of the 1819 Parliamentary debate on the pros and cons of gas lighting online here.

Baltimore became the first city to be lit by gas in 1816. Germany’s inaugural gasworks opened in 1825, by which time in London, over 40,000 gaslights illuminated 215 miles of streets. 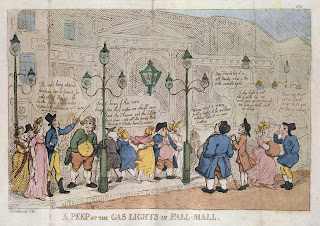 Here’s a Rowlandson cartoon from 1809 celebrating the Pall Mall lighting. From left to right, the speech captions are as follows. I particularly like the new challenge that gas lighting offers to the sex trade:

Well-informed gentleman: “The Coals being steam’d produces tar or paint for the outside of Houses — the Smoke passing thro’ water is deprived of substance and burns as you see.”

Irishman: “Arragh honey, if this man bring fire thro water we shall soon have the Thames and the Liffey burnt down — and all the pretty little herrings and whales burnt to cinders.”

Rustic bumpkin: “Wauns, what a main pretty light it be: we have nothing like it in our Country.”

Quaker: “Aye, Friend, but it is all Vanity: what is this to the Inward Light?”

Shady Female: “If this light is not put a stop to — we must give up our business. We may as well shut up shop.”

Shady Male: “True, my dear: not a dark corner to be got for love or money.”

And now the bad news. I discovered quite a lot of this information from an article in the Guardian, Life Before Artificial Light, which went on to discuss a book–yes, it’s another one for the TBR pile, I’m afraid, by Roger Ekirch, At Day’s Close. What artificial light did, in addition to making the streets, and people’s homes, safer at night, was to change sleep patterns that are probably prehistoric in origin.

Ekirch discovered that pre-industrial revolution sleep patterns, from the time of Homer onward, seem to have been segmented, with a “first sleep” until about midnight, when people would awaken and maybe get up for a time, followed by a “second sleep.” (People were probably going to bed, at the latest, at around 10 pm.) The waking up period, with what light was available, lamps, rush lights, candles, might include card games, conversation, reflection, and the obvious. A sixteenth century doctor reported that sex was better after than before the first sleep, which makes sense.

Furthermore, a study at NIH which deprived young males of artificial light reported that they naturally fell into this sleep pattern (no, I don’t know if they had sex, or with whom, in the middle of the night).

Interesting stuff. Have you ever lived entirely with natural light and did you find your sleep patterns changed? Do you think you’d enjoy a first and second sleep pattern? What would you choose to do in the middle of the night?

fascinating topic Janet. How interesting that Baltimore was lit with gas before New York.

I’ve just been reading up about the early gas company in Baltimore, Elizabeth. One of its founders was the artist Rembrandt Peale (when you’re named Rembrandt and are the child of a family of artists, it doesn’t give you much career choice). It took quite a time to get off the ground and apparently there was a lot of opposition to the idea of meters, so early customers were charged a flat fee.

Muse in the Fog

How interesting! I was afraid I might have to try this out myself last night (big ice/snow storm and power outages), but my electricity stayed on 🙂

This is truly fascinating indeed. I think I would like this–sleeping deeply in the early evening, then enjoying some awake time in the middle of the night…

Quiet conversation, perhaps a chapter or two of a favorite book (not a new one, or there would go the rest of the night 😉 )

I know my neighbor who once was stationed in Alaska found the lack of sun difficult. Can’t remember if she said anything about it changing sleep.

GROAN !! Another book to add to the TRB tower! Fascinating, Janet.

I’ve always wondered about the difference electricity made in people’s lives. My mother was raised on a farm. Her family were Native American share croppers which means the children kept the same hours and did the same work as their parents. To this day my Mom (aged 75) gets up with and goes to bed with the chickens.

After my years in the opera business I still prefer to sleep late into the day and feel the most alive late into the night. Getting up at 11 or so and not hitting the bed until 2:30 or 3:00 is my ideal day. Too bad my day job doesn’t let me do that!

There have been so many studies on how people need a regular sleep cycle to maintain optimum health and brain power. It is a shame that most employers just don’t see that.

Off to get the book now! Thanks, Janet!

I think I heard about the sleep cycles thing on NPR a couple weeks ago. Since I live out in the country where, so far, there is almost no artificial light at night, I know I find that the cycles of the moon have an effect on my sleep. When it’s full, it shines right in my window until about 1 or 2 AM and often wakes me up.

I do seem to routinely wake up at about 2:00 am, but I sure don’t get up. I lie there, quietly, and if I’m lucky I can hear the owls. When it’s winter, as it is now, the frogs and toads are amazingly loud, but at 2:00 they’ve quieted down.

People who move to the country from the city complain about how loud the frogs are. And they leave lights on all night which I find a shame. We can still turn off all the lights in our house and go outside and look up at the stars. Too many people can’t have that experience and that makes me sad.

Carolyn I have to agree with you. I live on five acres in the middle of nowhere and frankly I love it. No artificial light at night, just brilliant stars and they great big moon in the sky. And as I have lived here over five years the sound of frogs, crickets and whip-o-wills calling is the perfect lullaby. (with a deep continuo of basset hound snoring underneath it.)

My nephew dogsat for me during Nationals last year and he brought his telescope with him. He was amazed at the view of the night sky from my pasture. I have found that I sleep much better out here than I have in my city homes.