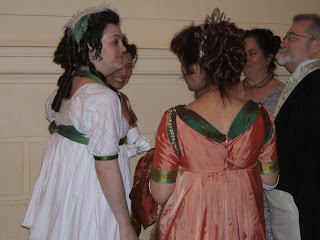 Hello, Riskies! I’ve missed you all in my time away from the blog (though I do stop in now and again to comment.)

But it’s just not the same. I miss the blog, and miss having the opportunity to air my opinions and force people to read my attempts at wit…

So when the Jane Austen Evening came around again, I thought “I really want to do another blog post at Risky Regencies on the ball!”

And the Riskies very kindly agreed — and Elena very very kindly offered me her day! (Thanks, Elena!) 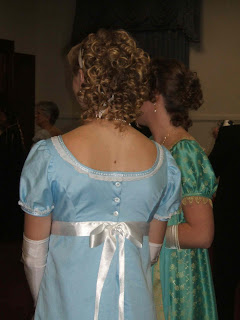 The festivities began at 4 pm with a grand tea. The food included tea sandwiches (cucumber, herbed egg, cheddar and carrot, and chicken cranberry — the cucumber was my favorite), two kinds of soup (including Mulligatawny), cottage pie, scones with cream and jam, and a variety of desserts, including my favorite: a very flavorful rosemary shortbread.

Oh, and there was tea, of course! Keemun, Queen Catherine, decaf Queen Catherine (yes, I know, not very Regency! but that’s what I had, or I’d never have slept that night), chamomile, and blackcurrant. 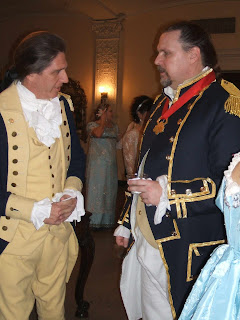 During the tea, we had a performance by a musical gentleman who called himself Beethoven. Yes, modern music! Quite shocking.

After we’d all eaten far more than we’d intended, and had a bit of trouble fitting into our clever Regency clothes (oh, very well, I’ll admit that some of us had only-moderately-intelligent Regency clothes), and gossiped more than we ought, we went off to freshen up and make ourselves ready for dancing.

Because…oh, yes, there was dancing. And more dancing! Quite four hours of it.

I scandalized everyone by dancing more than twice with a dashing gentleman, and scandalized them still more when they learned he was my husband. (Yes, I confess, I danced with him four times! It’s not strictly correct, but I am the daring, rule-flouting sort, as you all know.) (And even if I’m not, I can pretend to be for one night.)

The dances included several that have featured in Jane Austen adaptations, such as the always popular Mr. Beveridge’s Maggot (which was Lizzy and Darcy’s dance in the BBC/A&E P&P), Shrewsbury Lasses (from the same P&P, and fondly nicknamed “Other Way, Mr. Collins!”) 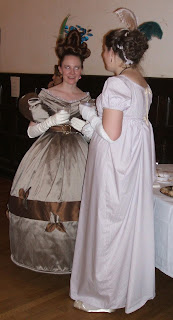 I’ve attended the Jane Austen Evening something like seven times now (and also attended about five or six other such balls), and I’m always interested in the changes I see. Every year, there seem to be more and more experienced dancers, which is delightful! It may be because there are so many flourishing English Country Dance groups in Southern California…or perhaps it’s because the ball sells out earlier every year, so that only the most dedicated get their vouchers!

I’ve also noticed a higher and higher percentage of attendees in some sort of costume. I don’t mean to imply that there weren’t many to start with — there were, with many fabulous costumes to be seen — but the number of attendees in modern clothing seems smaller every year.

Is this, too, because only the most dedicated get a ticket? Or because folks have had years to work out a costume? Only Jane Austen knows for sure…

Speaking of costumes…I saw a lot of feathers this year! They must be all the rage. And so many utterly gorgeous fabrics!!! I had so much fun just walking around and looking at all the gowns… 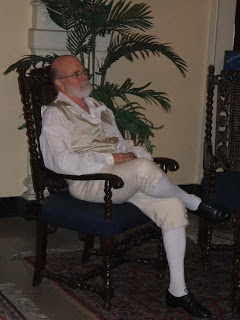 Speaking of fabulous costumes…here are some of the many photos I took this year! (Don’t you love digital cameras? if only Jane Austen had had one, we’d know for sure whether Mr. Darcy looked like Colin Firth, Laurence Olivier, David Rintoul, or Matthew Macfadyen!)

So…have you ever attended a period ball?

What did you think of it? 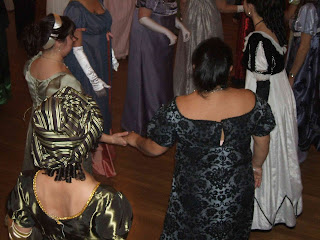 If you’ve never been to one, what part of the ball do you think you’d like best?

Would you wear feathers?

Would you dance with Mr. Collins?

What sort of sandwich sounds best to you?

If you had unlimited money and were going to create your own Jane Austen ball, what sort of food would you serve?

What would you wear?

Thanks for sharing my fun! 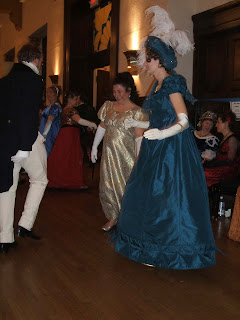 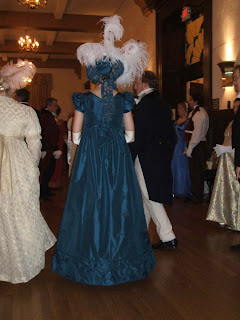 How fabulous you all look! And a good time was had by all it seems. Caroline x

Oh, I’m in costume heaven. They all look absolutely divine. I’m totally jealous Cara that you went. I love a smoked salmon tea sandwich myself. And I would love to throw a Regency or a Roaring 20’s party for my birthday.

I love cucumber sandwiches, but all the choices you had sound delicious.

I am just all envy! It looks like a fabulous time.
I aspire to lose enough weight to get in my old Regency gown, which I think would look lovely with feathers.

Next year I request a photo of you and Todd!

What gorgeous costumes and what fun! It looks as if the ball was a crush and a complete success. The hostess will be the talk of the Season!

I always enjoy these posts so much! Thank you for taking us to the ball with you.

I admit to a weakness for cucumber sandwiches, but everything sounds so delicious.

I would definitely wear feathers, but no turban. I am so short I would like a mushroom with a silken cap!

The only Regency balls I have attended have been the last two Beau Monde soirees and I enjoyed them both immensely.

Elizabeth, costume heaven indeed! I just regret I couldn’t show the fabrics better… (And my best picture wouldn’t turn sideways, so it got dropped…)

Diane, next year I’ll definitely have a pic of Todd & me! Somehow we missed that step this year. (And I need to lose weight myself to fit like I used to into my gown!)

Louisa, the ball was certainly a crush! I was wishing for a bit more room to dance at certain times…

Great photos. What a fabulous Evening. Your wit is sorely missed. Hope your writing projects are progressing nicely.

Hi, Cara! We miss you and always love it when you drop by to comment or full out blog.

The closest I’ve come to anything like this is the Beau Monde soiree at RWA, which I’ve always enjoyed. My husband and I were hoping to attend the ball put on by our local English country group (I was going to get some sort of costume together for him) but life intervened… Maybe sometime again, except Rich might have to stand by pretending he’s Lord Byron. He’ll have the limp, but I don’t know if he can look properly brooding. He smiles too much!

Anyway, great to see you here, Cara. It’d be great if Todd could stop by. I miss him too.

Elena, I love the idea of Rich being a smiling Byron…it would be an alternate history, after they gave Byron antidepressants and he started writing jingles for laundry soap… 😉

As to Todd, he may even stop by today — I did mention the post to him — but I’m not sure, because he’s currently snowed in in DC! (He was there to be on an NSF panel for a few days.) He’s had two flights cancelled already, though on the upside he’s found refuge with a cousin whose power has not get gone out… 🙂

All of you snowed in Riskies have my sympathy! While it is cold and windy here we don’t have two feet of snow to deal with, thank goodness!!

Take care all and stay warm!

Oooh, such pretties! 🙂 (I especially love the colors in that sky-blue and white gown). I do wish we had something like that here. Like Elena, the closest I get is the Beau Monde Soiree.

And now I’m off to make a cucumber sandwich

I, for one, am not sorry that Cara didn’t include a photo of me, at least; my costume was nothing to write home about. I did dance four dances with my wife, which was very shocking. I also danced two dances with another young lady; but I had to explain to her that if we danced one more dance we would be engaged. That would have been awkward, since I am already married, and she was only ten years old.

I am indeed snowed in (or snowed under, or something) in DC. Or, strictly speaking, in Arlington, Virginia. Fortunately, one of my cousins happens to live about a fifteen minute walk from the hotel where I’d been staying, but it was a pretty adventurous walk! I haven’t seen weather like this for a long time.

Good luck with the snow, Diane and Janet!

Todd, you are in the county where I used to work!

How nice of you to dance with one of the unattached young ladies at the ball. What a gentleman.

Cara, sounds like a wonderful evening. Great costumes, too! Lucky you.

Oh this sounds simply amazing. I want to go!

I adore all of the outfits!

This sounds sooo awesome! I wish I could have attended (or be invited…soinds like only the creme de la creme were there;) Looks like a splendid event. Fabulous post- and great pictures!

Hello, Cara and all the rest of the Riskies!

I love reading about the Jane Austen ball. It always sounds like so much fun!

Mr Watson and I have just returned from Bath, England, where we attended our very first Regency Ball. We found it most divertings and I do beleive that Mr Watson may deign to go again next year. How delightful!

That does sound fabulous, Claire!!!