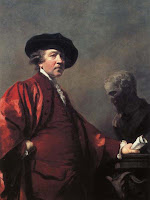 In looking around for a blog topic for today (I was feeling especially lazy, having just finished revisions and spending waaaay too much time watching the Olympics!), I found out one of the preeminent Georgian portrait artists, Sir Joshua Reynolds, died on this day in 1792 at the age of 69. I love Reynolds’s work whenever I’m lucky enough to see one on a museum visit, and enjoyed taking a closer look at his life! (Also today marks the anniversary of the death of Keats–I have a small tribute to him on my own blog, and I did a post on his death here at the Riskies a couple of years ago)

Reynolds was born on July 16, 1723 in Devon, one of 11 children of a village schoolmaster and clergyman. He showed an interest in art early on, and was apprenticed in 1740 to fashionable portraitist Thomas Hudson, where he stayed for 3 years. From 1749 to 1752, he studied the Old Masters in Italy and had a grand time, but sadly also caught a bad cold that left him partially deaf (in his self-portraits, he’s often seen with his ubiquitous ear trumpet). For the rest of his life he lived in London, rarely even taking a holiday from his studio. But he was never lonely–he was a sociable man with a wide and intellectual circle of friends such as Samuel Johnson, Oliver Goldsmith, David Garrick, Angelica Kauffmann, the Thrales, Edmund Burke, etc. He was one of the founders and the first president of the Royal Academy, an early member of the Royal Society of Arts, and a founder of the Society of Artists. He was knighted by George III in 1769. And yet he still had time to paint an estimated 3000 portraits (for which he could command between 80 and 100 guineas). He was well-known for his dynamic and life-like scenes.

Reynolds never married, though he had reputation as a nice and laid-back (though not very handsome!) man. His sister kept house for him and he seems to have been rather close to his family. There were rumors of liaisons with some of his artistic subjects, such as Nelly O’Brien and the actress Kitty Fisher, but nothing was ever proved. Boswell (who dedicated his Life of Samuel Johnson to Reynolds) stated, “He said the reason he would never marry was that every woman whom he liked had grown indifferent to him, and he had been glad he did not marry her.” He died in 1792 at his house in Leicester Fields in London and was buried in St. Paul’s Cathedral. A good resource about his life is Martin Postle’s Joshua Reynolds: The Creation of Celebrity (2005) and numerous art history volumes. A good source for discussion on his art can be found here. Here are just a few of his many, many Society and demi-monde portraits: 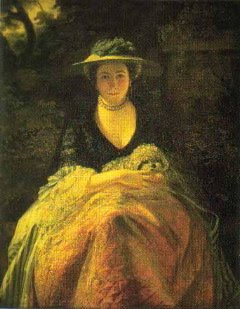 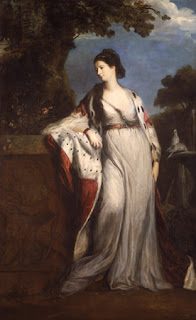 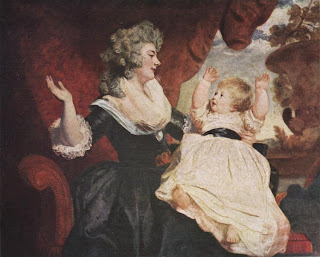 Georgiana, Duchess of Devonshire, and her daughter 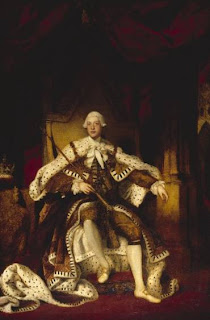 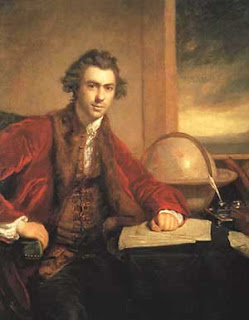 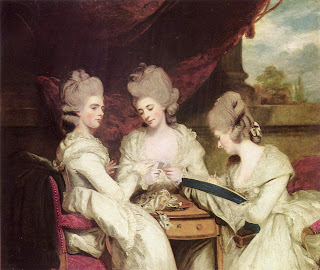 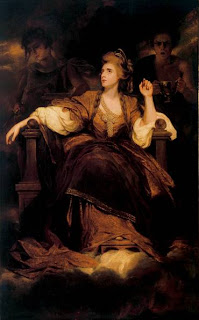 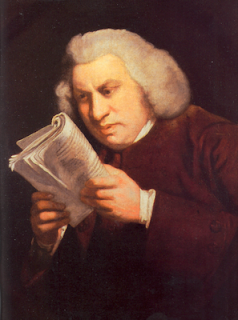 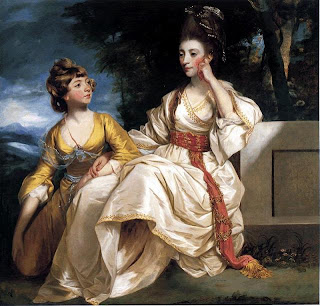 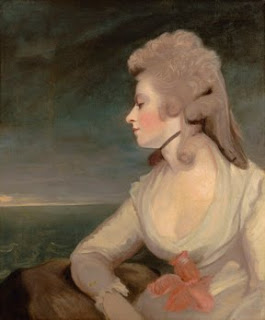 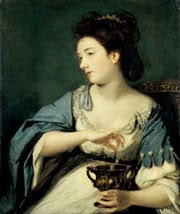 What is your favorite Reynolds portrait, or favorite historical artist? I’ve often thought it would be fun to dress up and have my portrait painted like one of these–what would you wear for your own portrait???

Well I don’t dress up and have my portrait painted, but for Halloween I dress up as a painting. Any of my facebook friends can check out my Lady with an Ermine look.

My favorite historical painter has to be Whistler or Gainsborough. I LOVE both of their styles and my favorites of theirs are all at the Frick in NYC. As for Reynolds I love the painting he did of the three sisters and of Georgiana and her daughter. I expect any of these people to move in the next second. They just look like they’ve got stuck in a moment.

I love those paintings, too (and also love the Frick! It’s such an intimate, personal museum and almost every painting is a wonderful one). There is such a dynamic sense of movement and affection between Georgiana and the baby. I recently read a very interesting article about the drastic change in the artistic portrayal of parenthood and family life in this period and how it reflected the growth of Romanticism. I should write a blog piece about that…

I love Reynolds! But I also love the lush nature of Sir Thomas Lawrence’s portraits and Romney’s portraits of Emma Hamilton.

I do have a portrait of myself! It is an oil painting copy of my high school photo done by a Korean artist when my dad was stationed there in the late 1960s. I also had a high school friend paint a portrait of me that is more impressionistic and less photographic. I wonder where that portrait is?

My favorite artist is John Singer Sargent, hands down. But I like Reynolds, too.

Thanks for posting about him, it’s nice to be reminded of other art forms besides writing (now where’s your post on ice dancing costumes, speaking of art forms?)

I love Sargent, Megan. Madame X is one of the best portraits EVER.

I do love that portrait of Joseph Banks, all bright eyed and bushy tailed after lots and lots of sex in the South Seas. And the self portrait of Reynolds dressed up as Rembrandt is lovely too.

I really like the self portrait. He just has that look of mischief about him and it takes a rare person to see that in himself.

Sargent’s Madame X is probably my favorite actual portrait, but Reynold’s portrait of Georgianna and her daughter and his portrait of Siddons are also really lovely.

I’m afraid Turner is my absolute favorite artist of this time period. There is just something about his paintings that make me homesick or stir some deep emotion in me.

My Mom has a portrait that was painted from my 21st birthday photograph. It is HUGE and hung in the livingroom as long as my father was alive. After he passed I persuaded her to relegate mine to my bedrooom in her home and we put a portrait of Dad as a seventeen year old private in the Army in its place.

I still have my Lucia di Lammermoor final act costume (sans blood) and if I were to have a portrait done I think I would like to wear that. Simple, long ivory muslin and lace nightgown with a sleeveless jewel-tone red long velvet wrapper. Very dramatic. And a bit drafty onstage!

Louisa, that sounds lovely! (but wouldn’t it be more dramatic to have the “after the murder” costume, LOL!)

I also love Sargent so much. I’ve often thought I’d want a gown like this red one for a portrait:
http://destinysbride.files.wordpress.com/2009/09/john-singer-sargent-ena-and-betty-daughters-of-asher-and-mrs-wertheimer_t11.jpg

And he also does charming scenes of children, much like the Reynolds/Georgiana one:
http://upload.wikimedia.org/wikipedia/commons/1/12/John_Singer_Sargent_001.jpg

Ingres is another portraitist I enjoy…

Oh absolutely, Amanda. With the dagger covered in her new husband’s blood it would definitely make a memorable portrait ! The bad thing was when they wet me down with blood for that lovely final act dramatic entrance and aria the stuff was COLD! Drafty nightgown and cold stage blood drenching is not comfortable in a theatre in Eastern Europe in March !!