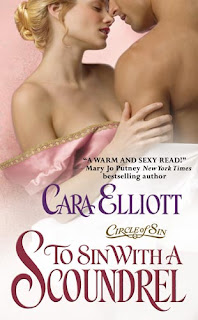 I’m back from the dead (or at least not feeling all pooky and sick anymore), and am so psyched I’ve been able to write this week.

This week, I was also lucky enough (and not sick!) to go to Lady Jane’s Salon, a monthly romance event held in New York City. Romance readers get together to socialize and listen to authors read from their works. This Monday was even more specialer, ’cause Cara Elliott (who’s guesting here on Sunday) read from her book, To Sin With A Scoundrel.

What I really like about what Cara read (and I have the book in house, haven’t read it yet–the TBR pile is taller than my 10 year-old) is the fix she so clearly had on her characters. If I met either one of those folks on the street, I would TOTALLY know them. Even if they weren’t wearing Regency clothing. And the two characters, while seemingly familiar, had stuff about them that wasn’t quite–something that made them each distinctive in their own ways. Very, very cool.

That was in juxtaposition to something else I’ve read recently, where I wouldn’t know the characters at all, except they are so two-dimensional they’d likely be flat in real life (it’s a Euclidean reference, people!). The eeeevil villainess was so eeevil she had yellow teeth, just in case you missed her pointed dialogue; the villain guy was a rotund lech; and the heroine was a Mary Sue in the worst way. Yuk. My life is too short to continue past the first chapter, so I didn’t. 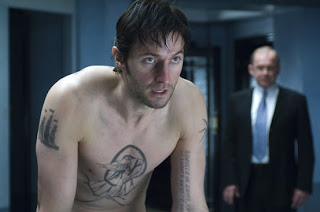 Everyone has dealbreakers in books; I can ignore almost any number of egregious faults and errors if I like the characters. Even if the characters do things that make my eyes widen (see: Lilith Saintcrow, Harry Pearce in MI-5, Season 7. Harry!). I wouldn’t like to hang out with that many of my favorite characters, but I love reading their stories. My dealbreakers happen when the characters are lifeless, cliched or do things, without explanation, that they would never do (it IS fun to have a character do something she would never do, but you have to set it up right).

Do I know where I am going with this? As usual, nope.

I am just glad to be back writing, not feeling lousy, and glad that there are so many awesome books in the TBR pile. Come back on Sunday for a lucid interview with Cara E.

She’s baaaack! Yay. Glad you are feeling better, Megan, and I’m envious that you were able to attend Lady Jane’s Salon. I loved it there.

I remember one reviewer comment on one of my books that the villain was stereotypical. The reviewer was absolutely correct and I’ve tried ever since to make my villains as real as my heroes and heroines.

Megan, looking forward to Cara’s interview. I had the privilege of reviewing the ARC for To Sin with a Scoundrel and I loved it! I posted reviews on Amazon and B/N.

I am envious that you attended Lady Jane’s Salon – such a fabulous idea! I’ve asked them to take it on the road (and across the Pacific) to Hawaii. I don’t expect to be in NYC until the RWA National Convention in 2011 – can’t wait that long!

My only comfort is my TBR with Risky authors!

I’m glad you’re fit and perky again! And I’m so behind in my MI-5 viewing it’s not funny. What I can’t understand it that even when I catch one coming up on tv it’s one I’ve seen before, and I haven’t seen that many, so how does that happen?!

BBC America quit showing MI-5 midway through Season 4, so the only way to see them over here is via DVD, Netflix et al.

Diane and Kim, thanks for the kind words. I am so happy not to be miserably tired anymore! Now just regularly tired.

So glad to hear you are feeling better! And I am so jealous you were able to attend Lady Jane’s Salon. Sounds wonderful !

Oh and by the by, didn’t someone – Janet – have a birthday? Happy Birthday Janet !!

My CP is ADDICTED to MI5. She watches them regularly via NetFlix. I need to start watching them as they sound right up my alley.

I read Lee Childs’s brother’s book EVEN about a man in naval intelligence. The author is Andrew Grant and he is retired from Her Majesty’s Royal Navy. I met him at a reader’s luncheon and from our conversation I think he may well have been involved in the spy business himself. I wonder how MI5 compares?

I must admit that I do like a villain who is very, very human. Then when he does the evil things he does it is far more believable and far more terrible.

Villains are the hardest to “write right”! But I do especially love the strangely attractive ones who become heroes in their own books. 🙂 (And I have been slowly making my way through MI-5 via Netflix! Haven’t reached RA yet, sadly)

Thanks for that pic-me-up, Megan. 🙂

Diane, I’m trying to move to DC in the coming year and work in a museum or library around there so I can get a second masters. I say we start a DC Lady Jane’s Salon. There might be a similar one already but I don’t know DC well enough to know. But if you’re up to it I’m all for it and I’ll make raffia and cucumber sandwiches or something. 🙂

Megan I agree on the lifeless deal breakers. You don’t want to finish a story if you can’t be invested in the character. Also I don’t know how tall my TBR pile is anymore. I know it weighs 10 ounces though and that’s because it’s all on my Kindle. Only bad part is sometimes I don’t remember what I’ve started and what I haven’t.

Good luck on writing. I’m sure to buy whatever you next publish.

Janet has also talked about starting a Lady Jane’s Salon in DC. I have absolutely no idea what would be a good venue, but I just asked my daughter, who enjoys a nightlife. She mentioned a couple of places.

I’ve tried to make it to countless Lady Jane Salons. One of my goals this year is to make it down to at least ONE!

I’m hoping they run a special one for the 2011 RWA National conference to be held in NYC.

I agree about flat and cliched characters. I’ve found it to be a deal breaker lately, as well.

Thanks for the RA peek. I am thinking of getting Netflix just so I can get my RA fixes.

And thanks for adding yet another new author to my TBB list! Can’t wait to dive in!

Megan, so glad you are feeling better! And thanks SO much for the amazingly lovely words about Lady Jane’s. I was pretty nervous up there reading, so glad to hear I didn’t totally garble the words.

I haven’t yet watched MI5 but have heard raves, so will have to Netflix it . . .if I ever get enough time to catch up on fun things like TV! I do love that fine edge between villain and hero, and really enjoy seeing how a skilled writer, be it on print or film, plays with that.

See you at next LJS—we are so lucky to be close enough to go every month.

Having Cara Elliott debut her new series at Lady Jane’s was both thrill and treat.

Megan, I hadn’t realized you’d been “under the weather.” I’m so glad you were feeling better in time to join us for our monthly salon-ing.

As for everyone or anyone interested in a Lady Jane Salon spin-off in your hometown, we four founders (Maya, Leanna Renee, Ron and Moi) will be giving an Author workshop at the Romantic Times Convention in Columbus next month as well as hosting a Special Lady Jane’s Salon event. The latter will take place from 7-9 PM on Saturday night following the Mr. Romance Contest.