One of my recent library booksale finds was a book by Maureen Waller, Ungrateful Daughters: The Stuart Princesses Who Stole Their Father’s Crown about Queen Mary II and Queen Anne. It’s a wonderfully fascinating story, and it struck me as I read it that I know so little about this period! Somehow after the shenanigans and drama of the Restoration period, my interest peters out until the mid-18th century. I knew the basics of the Glorious Revolution and how it led to the Hanoverian succession, but most of what I knew of Queen Anne came from the old BBC costume drama The First Churchills. I’m not sure why, as it seems this period has tons of drama of its own! It also seems a good topic to begin Women’s History Month…

And yesterday, March 8, marked the anniversary of the accession to the throne of Queen Anne in 1702. (For a great account of her reign I pulled out another booksale find from a few years ago, another book by Waller called Sovereign Ladies: The Six Reigning Queens of England).

Anne Stuart was born on February 6, 1665 at St. James’s Palace in London, the second daughter of James, Duke of York and his wife Anne Hyde (she and her older sister Mary were the couple’s only children to survive to adulthood). She spent part of her childhood in France after being sent there for medical treatment for an eye condition, living first with her grandmother Queen Henrietta Maria and then with her aunt Henriette, Duchess of Orleans. She returned to England after her aunt’s death in 1670. 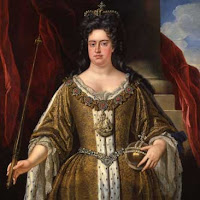 In 1673, she met the woman who would be her best friend (and eventually worst enemy) Sarah Jennings, who later married John Churchill. Also in that year her father’s conversion to Catholicism became public knowledge, though Anne and her sister were raised as Protestants. On July 28, 1683 she married the Protestant Prince George of Denmark, her second cousin, a union that proved to be domestically happy if unpopular in the country. Anne set up her own household, with Sarah Churchill as her Lady of the Bedchamber (the two took to calling each other Mrs. Morley and Mrs. Freedman).

Charles II died in 1685 and Anne’s father became James II, who was not well-received by a populace prejudiced against Catholics. The alarm increased when his second wife, the Catholic Queen Mary of Modena, gave birth to a son in 1688 after nearly 15 years of marriage. There were rumors the child had been smuggled into the birth chamber in a warming pan and wasn’t royal at all. Anne, who had gone to Bath for treatment for her gout before the birth, wrote to her sister “I shall never now be satisfied whether the child be true or false. It may be it is our brother, but God only knows…one cannot help having a thousand fears and melancholy thoughts, but whatever changes may happen you shall ever find me firm to my religion and faithfully yours.”

Her sister Mary and her husband, William or Orange, soon invaded England to dethrone James in the Glorious Revolution. In November, Anne was put under house arrest with Sarah Churchill at Whitehall, but they escaped in the middle of the night via a back staircase. When she returned to London on December 19, she was immediately visited by her brother-in-law and pledged her support to him. In 1689 a Convention Parliament was assembled to declare that James had abdicated the throne when he fled to France, and the crown was offered to Mary and accepted jointly by Mary and William, who ruled as the only joint monarchs in British history. Princess Anne and her descendants were to be in line of succession, followed by any descendants of William by future marriages.

Soon after they took the throne, William and Mary granted Churchill the Earldom of Marlborough, but afterwards they were not so congenial. In 1692, suspecting Churchill was a Jacobite, Mary dismissed him from his offices and his wife was removed from the Royal Household. Princess Anne was furious, and left her royal apartments to reside at Syon House, home of the Duke of Northumberland. She was then stripped of her guard of honor, and the guards at the royal palaces were forbidden to salute her husband, increasing the acrimony between the siblings.

Mary died of smallpox in 1694 leaving William to reign alone with Anne as the heir apparent since William and Mary were childless. William, seeking to improve his popularity (always much less than that of his wife), he restored Anne’s honors and allowed her to live at St. James’s Palace. He also restored Marlborough to his offices, and in return Anne gave her support to his government. Also in this period, Anne suffered an immense personal loss. By 1700, she had been pregnant at least 18 times, 13 times miscarrying or giving birth to a stillborn child. Of the remaining 5, 4 died before the age of 2, and only one son, William, Duke of Gloucester, survived. He died at the age of 11 on July 29, 1700, prompting a succession crisis. The line could not be left open for James II or his son, James Francis Edward Stuart, to return. Parliament enacted the Act of Settlement in September 1701 which stated the crown (in the absence of any more children from Anne) would go to Sophia, Electress of Hanover (descended from James I through his daughter Elizabeth, the famous “Winter Queen”) and her descendants, putting in place the Hanoverian succession.

William died on March 8, 1702 and Anne was crowned on April 23, 1702. Her reign began by becoming embroiled in the War of the Spanish Succession, which would dominate policy until the last years of Anne’s reign. Anne appointed her husband Lord High Admiral, in control of the Royal Navy, and Lord Marlborough was made Captain-General of the Army (and a duke), while Sarah became Mistress of the Robes. Another notable mark of the reign was the development of the 2-party system (Anne preferred the Tories and only “endured” the Whigs. The Churchills’ support of the Whigs led to the souring of their friendship). For more information on the twisty politics of Anne’s reign you can look here or here.

Anne’s husband died in October 1708 and Anne was stunned with grief, which led to an upheaval in her government. She herself died on August 1, 1714 after years of ill health. It was said her body was so swollen and large a special immense, square coffin had to be ordered for the funeral at Westminster Abbey. (Her wax funeral effigy can still be seen at the Abbey). Her heir, Electress Sophia of Hanover, had died a couple months earlier, and her son George became King of England (George I).

A useful biography is Queen Anne by Edward Gregg, but the Waller books are more fun. 🙂

Do you know very much about this period? Who is your favorite of “the six reigning queens of England”? (According to Sovereign Ladies, they are Mary I, Elizabeth I, Mary II, Anne, Victoria, and Elizabeth II). What’s a historical period you’d like to learn more about?

And for fun, I have a post on Oscar fashions at my own blog today! Go and vote for your favorites (I liked Anna Kendrick, Penelope Cruz, and Rachel McAdams a lot…)

I know nothing of this period, Amanda. Thanks for the enlightening information. I guess there is drama at any era.

And I knew you’d do the Oscar fashions! Am headed over there now.

I do like to imagine which side my characters’ ancestors (or descendants!) would be on…

Don’t know that I have a favorite queen. Trying to follow the convoluted history of the Royals in England is rather confusing at times. I am not all that familiar with this time period. Will be looking for those 2 books you mentioned.

Thanks, Amanda, for the informative blog! As LibraryPat wrote, this time in English history is confusing the royal succession. As we know from historical romances, all of Scotland mourned when their King James (and his heir, Bonnie Prince Charlie) were denied their throne in England and Scotland.

I also found the information on John Churchill interesting. He did “earn” his Dukedom by leading the “Allies” against the French and Spanish during the War of Spanish Succession (another royal heir issue). Obviously the Churchill genes were destined to produce patriotic leaders as the Duke’s nephew, six generations later, would lead the British people in their darkest hour during the Battle of Britain in WWII.

You have inspired me to learn more!