Monsters of the Smithsonian

I attended a panel discussion sponsored by the Smithsonian Resident Associates Program this week, Jane Austen: The Author, Her Legacy and… Sea Monsters? and I thought I’d share a few snippets of what I heard. 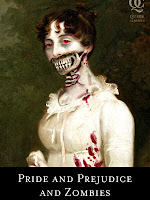 The participants were Seth Grahame-Smith, co-author of Pride and Prejudice and Zombies and total author of Abraham Lincoln, Vampire Hunter; Ben Winters, co-author of Sense and Sensibility and Sea Monsters, Tara Wallace, author of Jane Austen and Narrative Authority, and Regina Jeffers, author of Vampire Darcy’s Desire. The panel was moderated by Bethanne Patrick, managing editor of The Book Studio.

Now you all know about monster mash-ups and you’ve heard of all these books (I think the covers are brilliant). But some interesting points came up at the seminar.

One was that most of the fans are women. So even the lure of zombies still makes guys shy of Austen, although they may enjoy the 2011 movie version of P&P&Z starring Natalie Portman and yes, Colin Firth; Seth is writing the screenplay as well as writing MTV’s first scripted comedy series. Ben is writing another book for Quirk, Android Karenina, coming out later this year (with another brilliant cover).

Both Seth and Ben agreed that it was Austen’s economy of language that enabled the blood and guts and scales to integrate so well into the original books, and that although Austen is so sparing of physical descriptions, you don’t miss them. Tolstoy, being so much wordier, according to Ben, is a lot harder. On the other hand, according to Seth, “It’s not good policy to edit Jane Austen.”

All three writers agreed that a successful mash-up must understand and respect the original book and work with the internal logic of the story. Interestingly, all of the books were inspired by editors’ suggestions, and as Regina Jeffers said, “If I don’t do it, someone else may do it with less class.”

And someone–I wish I remembered who it was–made the comment that marriage in Austen’s time is the end of the story. Now so often–in real life and possibly in fiction–it’s the beginning of our stories. 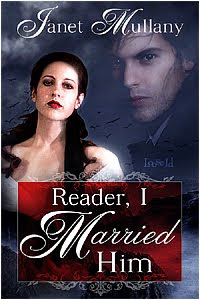 And on the topic of doing terrible things to beloved authors, here’s the gorgeous cover of Reader, I Married Him, my enovella based on Jane Eyre, releasing this month from Loose-Id. I’ll be telling you more about it soon.

Do you like monster mash-ups?
Which have you read?
What classic do you think would benefit from the, uh, injection of new material?
And what do you think of the comment that marriage is a beginning rather than an end?

I have not read any of the monster mash ups, but I do like the fact that they get people to read Austen who normally wouldn’t. I’m not sure if I would read them. They really aren’t my kind of book. But I understand why people enjoy them.

I think I’d like to see A Tale of Two Cities with werewolves or something. I mean what could make the French Revolution more fun than werewolves? I really can’t think of anything else that would.

Of course marriage is the beginning of a NEW story. 🙂

This sounds SO unromantic, but I’d like to see more romantic fiction where it’s okay to remain single. It’d be harder to do in a historical (but not impossible), but I’d like to see being single put forth culturally as a self-determined choice, and sometimes a preferable one depending on the heroine.

Singlehood doesn’t mean a state of lovelessness or failure.

What started me on this? The character of Aunt Imogen in the recent Alice in Wonderland. What a clueless story “mash-up” that was. But I was happily drunk on the visuals, and the box-office shows I wasn’t alone. But darnit, couldn’t they have brought the story up to a level with everything else?

Jane George, I’m not saying anything except read the book “Jane Austen Ruined My Life”. I think you’ll like it.

I’m probably not going to read a mash-up…except for Janet’s, that is.

I think the quote about marriage is very arguable. Did a single woman in Austen’s time “live” before marriage? Wasn’t her purpose to be married and so her “life” began then? And now, I would hope we do allow our lives to be lived whatever our marital state.

That said, to find love, to feel that attachment, that belonging to someone in a physical, mental and emotional way is still so very important to us that it fuels our Romance genre. And that is good for me!!!

I have not read a monster mash ups and have not been interested in them. But I suppose I should read a least one so I can decide if I like them or not.

I haven’t read any of the mash-ups–but I think I will howl when I finally do (er, but not in a werewolfy way).

But, hm–maybe Wuthering Heights with vampires? Because they’re already haunting each other, and Heathcliff is so eevil–or is he–and they’re both pale and there’s no sun there on the moors.

Of course marriage is a new chapter, and anyone who said otherwise, I kind of figure is a dummy. LOL

As for the mashups, I just keep reminding myself that I like what I read, and do not want anyone saying to me, ugh, how can you do that sort of thing. So, I might not always like the idea as a whole, I still think there is a place for it. Probably won’t mean that there will be a run on the original things, like the 6 original JA books, and we probably don’t want to know what Jane or Abe are thinking if they can look down right now, but hey, it’s getting people to read — how can we complain about that? 🙂

I read P&P&Z and quite enjoyed it–I think the first Lizzy/Darcy proposal scene was greatly enhanced by the two of them fighting and wrecking the furniture. I have a copy of S&S&S around but I have other, better things to read (a new book by Jude Morgan and, of course, Venetia).

WHAT? Colin Firth is in P&P&Z the movie with Natalie Portman? Did they announce that? News to me. Do tell Janet.

Laurel Ann, that’s what Seth said, but the subject of Colin Firth was always accompanied by much eye-rolling!

I have not read any of the “monster versions” out there. I think the suggestions for Wuthering Heights and Tale Of Two Cities are good ones.

Re: the mention of Colin Firth and eye-rolling. It seems to be something lots of male significant others do when his name is mentioned! If it’s true that Colin will be in the film, I wonder who he will be playing. He is certainly no longer in Darcy’s age demographic. (Although if you consider that this particular Darcy is immortal…hmmm…)

I loved Pride & Prejudice & Zombies. Seth stayed very true to Austen’s voice, and the subtle additions he made to her words flowed very nicely.

I haven’t yet read Sense & Sensibility & Sea Monsters, though it is on my TBR. I almost bought it for my Kindle, but half the joy of PPZ for me was the illustrations that accompanied the story. So I want a hard copy.

Little Women and Werewolves is next, coming out in May this year, but it’s published by Del Rey, not Quirk. And it’s a different author – I don’t know how Louisa will hold up to being were-d. I’ll read it, though!

Regarding marriage, I’d hate to think that marriage is the end of the story – in fact, I know it isn’t from personal life experience. Some of my favorite romances are second-love stories. Or romances that have the marriage early on (a la To Seduce a Sinner by Elizabeth Hoyt) and the HEA is after a lot of heartache and work in the marriage. And I’ve read plenty that end before marriage occurs – sometimes before an engagement when you don’t know if they ever will marry. So I am excited to read your novella, Janet, despite not having read any of the other continuance stories from classic literature.

And I apparently had more to say on the subject than I thought!