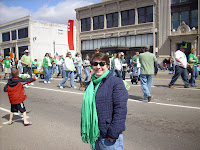 Tomorrow is St. Patrick’s day, yay! It’s been a busy holiday for me this year. I attended the North Texas Irish Festival weekend before last to sign copies of Countess of Scandal and listen to some great music. Last weekend was our local parade and another booksigning–in a pub! (Every booksigning should be in a pub, it makes them way more fun than usual…). Today I’m talking to a local history group about the 1798 Rebellion, and tomorrow a party. But today we’re having a party at the Riskies!

St. Patrick’s Day was only “officially” placed on the universal liturgical calendar of the Catholic Church in the early 17th century, thanks to the efforts of a Waterford-born Franciscan scholar named Luke Wadding, but it was unofficially celebrated in the local Irish churches and in homes from a much earlier date. It’s a holy day of obligation for Irish Catholics (but if it falls on a Friday, the Lenten obligation to abstain from meat doesn’t bind on that day, so bring on the corned beef and lamb stew!). It became a public holiday in 1903, and the first parade in the Irish Free State was held in 1931. In the mid-1990s, the Irish government wisely realized St. Patrick’s Day was the perfect time to showcase Ireland and its culture and increase tourism. They formed the St. Patrick’s Festival, first held March 17, 1996. It was so popular it became a 3-day event the next year, and by 2006 lasted 5 days, with approximately 675,000 visitors. The second-largest Festival is in Downpatrick, County Down, where St. Patrick is rumored to be buried after his death in 461. 30,000 people attended their parade in recent years. Large parades and parties are also held in Belfast, Cork, Derry, Galway, Kilkenny, Limerick, and Waterford. 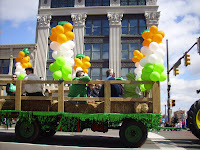 And the US isn’t left out of all the fun, of course! The first parade was held way back in 1737, in Boston. Other early parades included New York (1762), Philadelphia (1771), New Orleans (any excuse for a party! 1809), and Savannah (1813). In 1780, General George Washington allowed his troops a holiday on March 17 “as an act of solidarity with the Irish in their fight for independence,” which became known as the St. Patrick’s Day Encampment of 1780. (This now seems to be re-enacted on every college campus in the country on March 17!).

So everyone get out their green t-shirts and Chieftains CDs for our Riskies St. Patrick’s Party! Here is what you need for your dinner–shepherd’s pie, soda bread, and a shamrock-tini:

1) Peel and quarter potatoes, boil in salted water until tender (about 20 minutes)
2) While they’re cooking, melt 4 tbsp butter in large frying pan
3) Saute onions in butter until tender over medium heat (about 10 minutes). Add vegetables according to cooking time. Put carrots in with onions, add corn and peas either at the end of cooking onions, or after the meat has initially cooked.
4) Add ground beef and saute until no longer pink. Add salt and pepper. Add Worcestershire sauce. Add 1/2 cup broth and cook, uncovered, over low heat for 10 minutes, adding more broth as needed to keep it moist.
5) Mash potatoes in bowl with remainder of butter, season to taste
6) Place beef and onions in baking dish. Distribute mashed potatoes on top. Rough up with a fork so that there are peaks that will brown nicely.
7) Cook in 400 degree oven until bubbling and brown (about 30 minutes). Broil for last few minutes if necessary to brown.

Preheat oven to 375
Grease a round pan. Mix ingredients thoroughly before kneading into a ball
Cut a cross into the top and bake for 50-60 minutes
Serve with fresh butter and a Guinness!

Pour the vodka, Midori, and orange juice into a cocktail shaker. Add crushed ice and let stand for 5 seconds. Shake vigorously for another 5 seconds, strain into a martini glass and garnish with an orange slice!

For dessert, here is a great recipe forNigella Lawson’s Guinness Chocolate Cake! And you have a party… 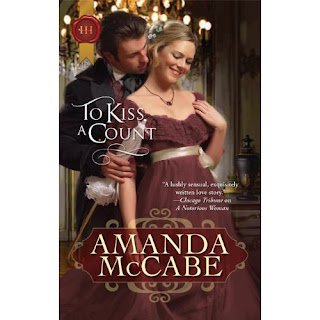 And, speaking of nothing to do with St. Patrick’s Day, I got a new cover yesterday! This is for the third of the “Muses of Mayfair,” Thalia’s story To Kiss a Count, out in June! They look quite a bit like the Thalia and Marco in my mind, and her dress is soooo pretty, but I’m still trying to figure out that parasol… (The prequel to this series, To Bed a Libertine, is still available at Harlequin Historical Undone! It’s not Irish, either, but it does feature a Greek Muse who likes a good party)

What are your St. Patrick’s Day plans? What are some of your favorite Irish-set books (or any good books you’ve read lately! I’m in a bit of a reading slump and need to find something new…)

My favorite Ireland book is “Ireland” by Frank Delaney. It is beautiful and even more fun to listen to on audio CD.

I never have St. Patrick’s Day plans even though my family has a rich Irish background.

I am, however, applying for a position to help plan the Dublin’s St. Patrick’s Day Parade. Who knows…it could be fun.

And you horrible woman! Now I HAVE to try to Guinness cake….it looks so yummy. I wonder how fattening it is?

I’ve all ready finished celebrating St. Patrick’s Day. LOL My daughter was in the parade this weekend and then we watched the “leprachan” change the river green. Each year the city does this and it turns the most shocking neon green. My daughter loves it.

Instead of the Chieftans I’d like to bring Gaelic Storm:
http://www.youtube.com/watch?v=JwDyVz3j2DE

I haven’t tried making that Guinness cake yet, but it does look ultra-yummy! I did have some at a pub once, it was so very chocolate-y I could only eat a few bites (which is probably a very good thing, LOL)

Kim, I would love to see the river turn green! When I was in college there was always someone who would pour dye into the fountain, and then the green water would splash all over the sidewalk and stain anyone’s clothes who got too close to it. No one ever got caught doing it, though…

You’re brave to make your granny’s recipe; I always put a little sugar and butter in my soda bread–not authentic, but good!

My Irish Cheese fondue is to die for:
http://www.ourgrandmotherskitchens.com/?p=6560

I might have to make that again for the big day.

I have to work, darn it. We did cute little “cupcake critters” dogs with leprechaun hats on them and we decorated the big cookies with shamrocks. We did St. Patrick’s Day cakes and cupcakes too. Even made petite cakes to look like leprechaun hats.

My favorite novel BY and Irishman is, of course, Dracula by Bram Stoker. A great storyteller with the gift of the blarney to be sure!

Thanks to you I wore green all day today…..

I have no plans for St Paddy’s Day. Will not cook anything.

St. Patrick’s Day is also my husband’s birthday. He grew up in Boston thinking the parade was for him. 🙂

The first Irish book I remember reading is Trinity. Ahhhh, I fell for Conor Larkin in a big way.

My favorite part of St. Patrick’s Day is the soda bread and tea. 🙂