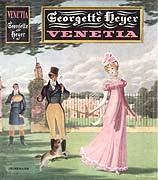 Our Risky Regencies Read Along of Venetia, spearheaded by Carolyn, is turning out to be a great fun. It was a new idea and I’ve been enjoying it immensely.

There are a couple more new ideas that have also captured my interest in the last week.

What Kristine and Vicky have in common is a love of research, especially researching Georgian/Regency/Victorian England. They also have a great sense of fun, so when they told me they were starting a blog, I knew I’d love it.

The blog is called Number One London. It launched on March 20 and here’s what they had the very first day:
Curiosity Corner – a recurring feature, this time a portrait and the task is to guess who it is.
Announcement of a Writer in Residence program – you could be awarded a stipend to spend two month to a year in Stratford on Avon! (have I got your attention now?)
Sharpe in India
All you ever wanted to know about franking a letter
Waterloo Bridge
Archive CD books online (you know I was excited about that one!!)

So check it out! I’m betting it will be almost as fun and educational as Risky Regencies.

Next new thing is from YouTube via ABC Nightly News.
Remember the remake of We Are The World debuted during the Superbowl? I was watching ABC news and Diane Sawyer did a story of another version of We Are The World done by ordinary people from all over the world. It was the idea of Lisa Lavie, a singer, who chose 57 other singers from YouTube and asked each of them to tape themselves singing We Are the World. Then she spliced them all together.

Here is the result:

These everyday people, from all over the world, were simply fantastic.

(for an interview with Lisa Lavie with Diane Sawyer, look Here.

Next Monday I’ll have something new to announce! A new book (well, an anthology) and a book giveaway. And more!

What’s new with you? Any new experiences? Tell us!

Bookmarking! And adding to my writer’s folder. Makes me want to go back to my Regency manuscript and do the re-write it needs, as I’ve been focusing on a contemporary of late.

That was incredibly moving as well as beautiful. Thank you for sharing it with us.

I found Vicky and Kristine’s blog through Jo Manning and have bookmarked it ever since. Love it.

I’ve already visited Vicky and Kristine’s blog and I will probably be there every day. So much help and SO fascinating!

Neat idea for the video. Far more moving than anything done by professionals.

I agree with all of you!
azteclady and Louisa, I found the video incredibly moving and was in awe of the talent of each performer.

Judy, Elizabeth, and Louisa, we really have to keep watching Kristine and Vicky’s blog cuz there will be LOTS of good stuff on it! Am going to check it now!

Well I’m in the process of creating a new blog called The Fourmiddables, which has five modern day women who love reading and have taken on the personas of five very real, but dead authors. We will be blogging about what we’re reading and tying them to classics and every day life. The five authors are Jane Austen, Charlotte Bronte, E. Nesbit, Dorothy Parker and George Sand, who will be joining us in July. We have our first page up describing what a Fourmiddable is, but no other posts yet. If anyone ever wants to come on as a guest blogger please e-mail me at missaustenregrets@gmail.com and I would be happy to accommodate you.
I am chaperoning a trip to DC this Friday. We drive down Friday morning and leave 7:00PM Friday evening. I only have to make sure everyone gets on and off the bus. The rest of the time is mine to play in DC.

PS for anyone who wants to check it out:
http://www.fourmiddables.blogspot.com
We will hopefully start posting regularly next week.

Fun new blog!
And Jane A., I can’t wait to hear what all you dead ladies have to say!!

Jane Austen! I hope you have time to go to the Library of Congress! The Great Hall is one of the most beautiful places in DC.

And I hope the Cherry Blossoms show up for you!

Diane, thanks for following. Now I feel like I have to be pity and punny and witty in my posts. I am Jane Austen (obviously) and I’m trying a stint as E. Nesbit. Should be fun.

AWSOME!!! I loved this song when it first came out and like this version better than the professional remake. We had a workshop back in the 80’s and learned to sign it. It was easy to teach and learn. We used it for our closing ceremony for our Girl Scout awards ceremony that Spring. We had about 40 first through sixth grade girls and their leaders sign it to the song. It was lovely.

This was an interesting and very full post. I liked all the links.

Librarypat, I can just imagine how moving it would be to hear and see 40 Girl Scouts perform the song!

I always liked the “no egos here” concept of the professionals performing the song, but I LOVED the emotion of this YouTube version. People singing from their hearts.

Next year marks the bicentennial of the beginning of the Regency. The Prince of Wales took the oath by which he became Regent at Carlton House on 6 February 1811.

Are the Riskies planning to do anything to celebrate this anniversary, even though it may only be important to lovers of Regency romances? It seems a pity to let it pass without some acknowledgement.

Kat, what a great idea! Of course we will do something….I think.