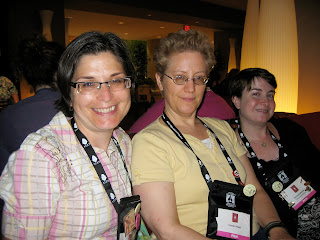 Woo-hoo! Have you heard? Our own Riskies, Carolyn and Amanda, have each been nominated for the RITA award. It’s the annual award bestowed on the year’s best published books, and the winner is announced during RWA’s Annual Conference.

SO PROUD OF THEM!

(even though the only pic I have of all of us makes me look dim-witted. I’m the dopey-looking one on the left).

Amanda was nominated for her novella, “Charlotte And The Wicked Lord” in the anthology the Diamonds of Welbourne Manor, while Carolyn was nominated twice; once for her Regency, Scandal, and once for her paranormal, My Forbidden Desire. All the nominees are listed here. 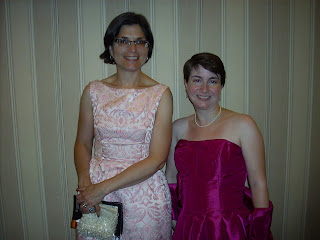 I couldn’t say for sure, but I think I yelped almost as loud as the actual nominees did when I saw the news. It’s really exciting to have such talented, and such good, friends. Another reason why I just can’t quit being a writer. Not yet, at least.

I haven’t been writing fiction this week, but I have an actual good reason: I am heading to Portland, Oregon, to visit my best friend. When she moved out there–what, nearly ten years ago?–I didn’t know what I’d do. But we maintained our friendship, and visit each other when we can (her family is here, so she makes the trip more often than I do) and whenever we see each other, it’s like five minutes has passed.

One of the funnest things about going on a trip is deciding what books to bring. OF COURSE I am bringing Venetia, since I’ve finally finished the ‘cannot put it down’ book, Brent Weeks‘ Beyond The Shadows (the third book in his Night Angel trilogy). I will likely bring Jeaniene Frost‘s One Foot In The Grave, since the library wants it back, and I want to read it. I do have the Kindle for iPhone, so even if I read everything I brought, I would be okay. Oh, and my friend? Works at Powell’s Books, so I’m pretty sure I could pick something up in an emergency.

BUT. There’s no replacement for that hour or so of book choosing, prior to travel. Especially since I stay up later than my friend, and am staying in a hotel room because of her cats (lovely creatures, but I don’t like sleeping at the hospital–I’m allergic). So that means plenty of Megan-time, which means LOADS of reading.

Other options include:
Scarlet Pimpernel, ’cause I’ve never read it.
Clockwork Heart by Dru Pagliassotti — it’s steampunky, and was highly recced by someone whose opinion I respect.
Tempting Danger by Eileen Wilks (another RITA nom, not for this book). This was recced by Carina Press’s Angela James.
What Angels Fear by C.S. Harris–recced by Cara Elliott. But it’s a hardcover, and I don’t like traveling with hardcovers.
And, oh, loads of others down in the room where we store the books. You know, the one with stacks of books (and shelves of CDs?) everywhere?

How many books do you pack for a trip? What’s your favorite part about staying away from home?

I’m about to head to L.A., so it’s funny you should ask this, today. I have six books packed, for the weekend. That being said, I am going for Tolkien Reading Day, so I’m taking Fellowship of the Ring and Return of the King since I’m reading from both of them. I must have books for the airport and on the plane to keep my mind off the fact that I’m in an enclosed space over which I have no control. The flying part doesn’t bother me; being in an enclosed space with no way out does. So, I’m taking both of Teri Wilson’s Hoofbeats and Heartstrings books, as well as An Unexpected Father by Lisa Ruff and THe Blackmail Baby by Natalie Rivers. I probably won’t finish them all, but I have this ever-present worry of running out of something I want to read. And my favorite part about staying away from home is definitely the friends.

I always take at least two – more if the trip is longer. Usually I take a Regency research book and a historical romance. I love to take anthologies because I can read them in short bursts if I have layovers, etc.

I love staying away from home in hotels. Not having to clean or make the bed or cook. Love it! But I am a bit of a home body and don’t like to travel all the time. I traveled so much as a child (Air Force brat) and then as an opera singer in a traveling opera troupe that I feel as if I lived much of my first 35 or so years out of a suitcase or a trunk. Once I finally settled on my property here I told my brothers the next time they moved me I would be in a pine box.

LOL Megan! In our defense I think that pic was taken VERY early in the morning after some party or other at RWA. 🙂

I also have a trip coming up in a couple of weeks, and even though it’s a fairly short one I’m also in a book tizzy. My TBR pile is so huge–what do I want to read from it? And what if I choose wrongly and am stuck without something good to read?? I also have to take at least 4 or 5 in different sub-genres. It takes longer to decide this than what clothes to pack!

And your trip sounds sooo fun! I love the NW.

Judy, Oh, I hope you have a wonderful time at Tolkien Reading day. I know that is like heaven for you.

Louisa, I, too, love staying in hotels and, really, the thought of staying in one alone sounds lovely. No one to think about but ME ME ME.

Amanda, methinks you need a Kindle or some other eReader (an IPad, perhaps?) You can take a whole library and it is a lot lighter. I think as a reward for finalling in the RITA, you should get yourself one of these devices. My tax lady said I could deduct it!

Congrats to Amanda and Carolyn on their nominations!

Last fall, I moved to Hawaii with two cats and to children (hubby was already there). I had to hand carry personal documents, jewelry, and anything else that was too valuable for the moves to pack. I added four books for the 14-hour flight, which came in handy as the movies repeated themselves on the two separate legs. What better way to occupy my mind during turbulence over the Pacific?

Last month, we had 5 hours notice of a possible tsunami, so I packed supplies for five days in a shelter, including 10 books. Again, what better way to occupy my mind? Luckily, the tsunami did not come and I could read the books at my leisure on the beach instead!

At one point in my life I realized I didn’t really need to take three gigantic hardbacks with me when I traveled, one of which was a huge collection of metaphysical poetry. But I have to take something trustworthy and readable.

Coming back from the UK is easy–I hit the Oxfam bookstore and the airport bookstores and grab stuff that isn’t released yet, or maybe never, in the US.

Within the US, I usually like to take something spectacular I can unload on a friend at the other end–you’ve got to read this. Or library bookstores are good.

One of the worst journeys I’ve ever had was coming back from Nationals via Atlanta (maybe from Atlanta) and I had 3 or so books to read in my carry on stuff. They were all awful. They were so bad in fact that I turned to a book I’d bought from the library bookstore for the journey out and hadn’t got to. Even though it was an early Patricia Cornwell that described in great and gruesome detail a plane crash on the very route I was flying, it was preferable to either of the freebies I had.

That is too funny, Janet.

Congratulations Amanda and Carolyn! (Both favorite stories for me).

I don’t sleep much, so when I’m away, I want to bring a book for every day, especially on a beach vacation. One of the reasons I like ebooks, so much easier to have plenty of stories along with me.

What Angels Fear is TOTALLY worth the hardcover book weight. Plus C.S. Harris donated her entire series in hardcover autographed to my breast cancer fundraiser Reading for the Cure. So I would definitely take her. The book is amazing also. Although the woman killed in the book is named Rachel and it’s really weird to read a book where a person with your name gets killed. Surprisingly my name isn’t really Jane Austen. I went to DC today and although I brought over 500 books with me (on my Kindle) I still brought print books as well. Today “Do Museums Need Objects” made the cut and I bought two Eva Ibbotson’s about WWII. I’m hoping one of them will become my next Summer of My German Soldier.

Speaking of friends I just met my best friend in DC for the day. We haven’t seen each other in two years and it was like we were never apart.

Have fun Megan and congratulations Amanda and Carolyn.

We usually drive when we travel and I always bring way more books than I could possibly read. In addition, I always hit thrift stores and come home with one or two more boxes of books. We always have several books on CD with us. I can read while my DH is driving (if we aren’t listening to one), so no time is wasted.
You only have one room for books? The only rooms in our house that don’t have books are the master bedroom and the dining room. There are 40 bookcases and more boxes and piles of books than I care to think of. It really is an addiction.

Big congrats to Amanda and Carolyn what great news!