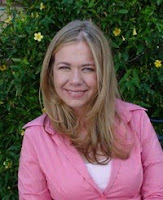 Last year, Jennifer Haymore visited the Riskies to talk about her debut book, A Hint of Wicked! Now she’s back to introduce the sequel, A Touch of Scandal (an RT Top Pick review for April!). Comment for a chance to win a copy of A Touch of Scandal or a copy of her Dawn halliday release Highland Surrender–she’s giving away one of each! (Just let us know which you’d like in the comments…)

Riskies: Welcome back, Jennifer! Since I read A Hint of Wicked I’ve been dying to know what would happen to poor Garrett! Finally we have his story in A Touch of Scandal (and a heroine in disguise, too). Tell us about this book! What was the inspiration for the plot?

Jennifer: I’m so excited that Garrett is finally able to meet and fall in love with the woman who will be at his side forever! I think he really meets his match in Kate, and Kate is one of my favorite heroines. She’s so exuberant, honest, and full of life just thinking about her makes me smile.

Here’s the blurb for A Touch of Scandal:
The last thing Garrett, Duke of Calton, expects to find while tracking his sworn enemy is the delectable, mysterious Kate. This beautiful servant girl rouses a longing the battle-scarred ex-soldier had never hoped to feel again. But when she turns out to be the sister of the man he seeks, he’s convinced he’s been betrayed.

Kate knows her duty to her family, yet how can she ignore Garrett’s powerful pull on her heart? Or the heady temptation of his stolen and sizzling kisses? Scandal has followed the duke since the war. Now the greatest shock of all is on its way–the one that can seperate Garrett and Kate forever…

Riskies: And this is not your only new book on the shelves! Your other self–Dawn Halliday–laso has a new release, Highland Surrender. Tell us a little about this story.

Jennifer: After writing 2 books centering on love triangles, Highland Surrender is my attempt at a “love square.” There are 2 couples matched up at the beginning of the book, but they end up with different partners in the end!

Here’s the blurb for Highland Surrender:
Determined to put his roguish past behind him, the Earl of Camdonn arranges to marry the proper Lady Elizabeth. But when an accident lands the earl in the expert hands of a beautiful Highland medicine woman, all well-laid plans are thrown to the wind–and just as in the old days his passions run high…

Ceana MacNab has terrible luck with men. Resigning herself to the healing arts, she has steeled her heart against love. Then fate sends Cam her way. Even though he’s a well-bred Earl, and Ceana a low-born Highlander, their all-consuming passion may lead the way to lasting bliss.

Riskies: How do the two names differ?

Jennifer: I was Dawn before I was Jennifer! I think they’re both a lot alike, even though Dawn is (usually!) much spicier than Jennifer. But ultimately the reasons behind the two names had to do with contractual considerations…

Riskies: Did you encounter any interesting research tidbits for these books?

Jennifer: Too many to name! One that comes to mind is researching the industry of Glasgow in the early 18th century (well, okay that might not be interesting to some people, but it was to me, LOL!). One of the big ones was whale hunting…and I’ve read some pretty gruesome descriptions of how men hunted whales back then. Fascinating stuff!

Riskies: What’s “risky” about these stories?

Jennifer: A Touch of Scandal is risky because so much happens to the characters I worry the readers’ heads will whirl…

Highland Surrender deals with some edgy situations and relations between the characters that could definitely be called risky!

Riskies: And what’s next for “both” of you?

Jennifer: I’m finishing up edits on Jennifer’s next book, A Season of Seduction which is the final book in this trilogy. I’m so excited about this story! Dawn isn’t sure what’s next–she’s dreaming up her next project as we speak and hopefully it will be something containing more hot Highlanders!

You can visit Jennifer at her website here and Dawn at her site here!

Hi Jennifer,
First I’d like to wish you a Happy Easter if you celebrate it.
Secondly I’d like to say I enjoyed the questions and answers. Since I have a great love for Scottish Highlanders I’d love a chance at winning Highland Surrender.Thanks Jennifer.
Carol L.
Lucky4750@aol.com

Hello, Jennifer; I enjoyed the interview. I like stories about Highlanders and brawny ones at that! LOL. Your book sounds great. I know I must specify a book, but either one would be great to read. But, since I must, I go with Highland Surrender. (Or you can put me in for any that you want…)

Happy Easter, Everyone, and welcome back to the Riskies, Jennifer (and say hi to Dawn for me, too).

I simply love your books Jennifer. Happy Easter to you and yours. Can’t wait to read the new book.

Hi Jennifer,
Happy Easter. I really into highlanders so I would Love to read your book Highland Surrender.
All the best,
Kirsten

I am really looking forward to A Touch of Scandal. I very much enjoyed A Hint of Wicked, even though I didn’t know how you’d pull off her making such a hard choice (great job!)

I loved A HInt of Wicked…the book and its cover. I have been anxiously waiting for Garrett’s story. I love this cover, too and would love a chance to win it. I did not realize that it was to be a trilogy. I’ll have to start another countdown!

Great blog – I enjoyed your interview Jennifer! And a happy Easter to one and all. If I’m lucky enough to win I would love a copy of Highland Surrender. Luv Caroline x

Hello, Jennifer! I thoroughly enjoyed A Hint of Wicked and can’t wait to read Garrett’s story. He really deserves a happy ending. I’d love to put my name in the pot for either of your books as they both sound intriguing.

When writing these stories do you know from the beginning who will end up with whom or does it change as the story unfolds itself to you?

You can put me in the draw for either book, but like a lot of the ladies here, Highlanders are a fav, and I love that cover, the colours alone.

All the best for your releases!

Great interview Jennifer and Happy Easter! Your new books sound fabulous and I do love me some highlander so its a book for me! Thanks for sharing it with us today!

I absolutely LOVE your books! I would love to have a chance to win A Touch of Scandal—I loved A Hint of Wicked, so I am VERY excited to read Garrett’s story!

I do want to know–who do you prefer writing about–Highlanders or Englishmen?

Hi both of you and welcome to the Riskies again!

I’m intrigued by A Hint of Wicked and a Touch of Scandal. Although sadly since I didn’t read the first one I now know how which one doesn’t get the girl, but I will still read it anyway. With the way some people are posting it seems like it must be a good book and Garrett a great character. And to be honest I think a man is nothing without regimentals (or a uniform….what can I say a man in uniform makes me weak at the knees).

I’d love a chance to win A Touch of Scandal.

I would love a chance to win a copy of “Highland Surrender.”

A Touch of Scandal would be wonderful to win and thanks. A Hint of Wicked was great. Keep those books coming.

Thanks, Jennifer and Amanda, for a fun interview!

Your Dawn Halliday release, Highland Surrender, is just in time for National Tartan Day, celebrating the Scotland’s independence when the Scottish nobility signed the Declaration of Arbroath on April 6, 1320.

Looking forward to reading both of your new books!

Hi 🙂
i’m still new with Jennifer’s books. i’m soooooo looking forward to have my chance to one of her books !

Have read blurbs and reviews on both these books lately and they have been good. Did not realize Dawn and Jennifer were the same person. The books have been reviewed on very different sites.
The both sound like really good stories. I look forward to reading them.
Best of luck with their releases and your next books.

Hope you had a great weekend.

Hi Everyone! I hope you had a great Easter!

Louisa asked: “When writing these stories do you know from the beginning who will end up with whom or does it change as the story unfolds itself to you?”

The only story that I was ever unsure about was A HINT OF WICKED. That one required lots of deep conversations with my agent and editor trying to answer the questions, “Who will make Sophie the happiest?” and “Who is the right man for her?” LOL. I think we came up with the right answer, especially now that I’m wrapping up the third book in the series. 🙂

Katie asked: “I do want to know–who do you prefer writing about–Highlanders or Englishmen?”

Oh, I couldn’t choose a favorite! Highlanders and Englishmen are very different breeds…but I love writing about them both. And I really enjoy switching back and forth between the two.

Thanks so much for your comments, everyone! 🙂