“In Oxfordshire, even now, older people sometimes refer to Easter Monday as Ball Monday, because of the numerous ball games that used to be played on that day. Stoolball, knurr-and-spell, trapball, ninepins, handbasll, bowls and football were all customary pastimes of the Easter holidays.”

Not so different from “March Madness” or the opening of the baseball season, when you think of it, except it is part of Easter celebration.

Even though the most sacred of the Christian holidays, Easter’s celebrations have come from pagan origins. The word “Easter” comes from the Saxon goddess of spring, Ostara, who is said to have turned an injured bird into a rabbit that laid rainbow-colored eggs–but only one day a year! Both rabbits and eggs are, of course, common fertility symbols. 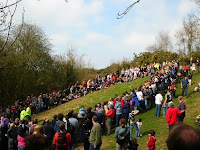 I can imagine some of our Regency characters playing “ball” games with eggs. Egg Toss–throwing eggs in the air and catching them until they break. Egg Shackling–grasping a hard-boiled egg in one’s right hand and using it as a weapon to strike the eggs of other players. The winner is the one with the intact egg at game’s end. Egg Rolling, still traditional in Northern England, Scotland, Ulster and the Isle of Man–rolling colored hard-boiled eggs down a slope until they are cracked and broken, at which time they are eaten.

Which brings me to my UNDONE theme. The word undone can mean “destroyed” or “opened,” just like an Easter egg rolled down a hill on Ball Monday!

Don’t forget! It is All Undone at my new blog this month. Tomorrow I’ll announce last week’s winners. Wednesday I’ll tell you about Michelle Willingham’s and my Drive By Booksigning, and Friday I feature the second of my four anthology mates, Louise Allen, whose story in Pleasurably Undone is Disrobed and Dishonored. Yes there will be prizes both days!

What celebration did you do over Easter? Do you have any pagan-like Spring traditions?

Ball Day, the first I’ve ever heard of it. Much like March Madness as you said. This is one of the reasons I love RR so much. The history is amazing and the things I learn are wonderful.
Thanks for sharing.
Carol L.
Lucky4750@aol.com

I don’t know if they would be considered “ball games”, but Saturday my family and I made Ukrainian Easter Eggs. My sister apparently loves to do this every Easter, but has not spent Easter with us for several years (Easter was reserved for her husband’s family and they are no longer together). Trying to blow all the yolk and white out of the egg was difficult and funny. Some of our eggs were very beautiful and some pretty bad. I made a Napoleon themed egg with the bumblebees and my sister made one with Fleur De Lis. My other sister made a beautiful egg with a mama elephant and a baby elephant holding trunks and tails. It was amazing. It is for my niece and her first Easter.

Carol L, I had never heard of Ball Monday, either.

Jane Austen, what a fun family activity! I still have an Easter egg that my daughter made to be a Christmas tree ornament. I also used to have a client who painted the plastic eggs and they looked spectacular!

That’s a new one, Diane!

I heard on the radio this morning that this Monday is always Dingus Day in Buffalo, New York, a polish tradition where they celebrate Polish food and the old country practice of courtship: Dousing the young woman you admire with water and tapping her with pussy willow.

Um…I think that celebrating old style Polish courtship sounds like you’re on the playground where little boys pull your hair if they like you. Note to men in Buffalo: I would not find it all amusing to soak me with water as a way to tell me you like me. Be like the Welsh….carve beautiful spoons all winter that are peppered with meaning and tell me that way.

Naturally Janet’s mention of alcohol and violence captured my attention. 😉 Next stop on the procrastination tour: History Hoydens.

Ball day? I loved the Ukrainian egg activity. Wow. Despite growing up in a Christian home, the only tradition I remember was the Easter basket that ceased once you were too old (a teen, or was it out of elementary school? no matter). I had to work Good Friday, but I endeavored to remember the significance of the day. On Saturday, I bought a new plant, my own symbol of new life. I attended an Easter service, Sunday morning, with my sister, my niece and her friend. It was lovely. Next year, I’m going to do more because it isn’t a one-day event, and means everything to me.

Diane, you sure did start the ball rolling on your blog wih a bang. I’m just back here from visiting there. What a huge lot of comments. Good for you!

As Janet said, festivities always involve alchohol and violent games. And food, tons of food. In fact, life in the Middle Ages, my current immersion, constituted that and also the fourth activity: tussling of the sheets. 🙂

Janet, I was certain you would know something about these festivities. Violence and alcohol! What is a celebration without it.

Deb, my parents met in Buffalo, NY. I never heard them talk about Dingus Day. Not that they would.

Judy, good for you to remind us that there IS a spiritual part of Easter!

Keira! Good to see you here. Hope you are feeling better!

I’m with you, Jane Austen. I would much rather have those spoons than a dunking with water in Buffalo NY! BRRRR!

There was a bit of ball playing at my place yesterday as all of the dogs got decorated eggs in their Easter baskets and the outside dogs spent the entire day tossing them around, chasing them and finally when they were good and grubby, eating them. Great fun and no alcohol involved. All the violence was done to the eggs!

Was there also a doggie washing afterward, O Doggie One????

Not a complete wash, O Divine One, but a good chase down with the hose. I have a sneaky suspicion one of the Idiot Brothers – Clyde ate ALL of the eggs in his run, including those intended for his sister, Dancer and the other Idiot Brother, Zorro. At the end of the evening right before bedtime Clyde was sitting in a Buddha like pose with a very thoughtful expression on his face and a very full belly!

This year we were working on our daughter’s house. We did have an Easter dinner and baskets for the grandchildren. We generally go to church Saturday evening. Even though the grandchildren are getting older, they still enjoy the Easter Egg Hunt.
I have a whole basket of blown eggs that I never got a chance to do anything with.