How coincidental that I featured my anthology mate, Louise Allen, on Diane’s Blog last week, because her UNDONE story, Disrobed and Dishonored, in Pleasurably Undone (in bookstores now!) is about a highwayman in disguise, always a popular hero in Regency Romance. 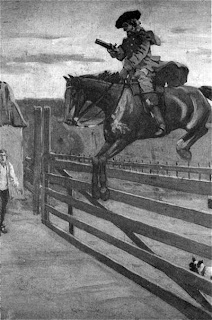 What is the coincidence? Last week, April 7 to be exact, marked the anniversary of the death of one of England’s legendary highwaymen, Dick Turpin. Turpin was hanged at York raceway April 7, 1739:

On this date in 1739, famed desperado Richard “Dick” Turpin rode through York on
an open cart, saluting his admirers, then sat upon his gallows at the York
raceway for half an hour, chatting with spectators and executioners, until he
“with undaunted courage looked about him, and after speaking a few words to the
topsman, he threw himself off the ladder and expired in about five minutes.”
from ExecutedToday.com

Dick Turpin was not quite the gallant highwayman legend depicts him. He and his men relied on brutality and cruelty and often preyed upon the weak and stole from the poor. In one account, Turpin and his gang held a widow woman over the fire in her fireplace until she told where her money was hidden. In another, they beat a man’s wife and daughter until he gave up his money. Turpin teamed up with another renowned and more clever highwayman of the period, Tom King. When the two of them came upon two maids who had sold some livestock, King thought them “too pretty” to take their money. Turpin robbed them anyway.

Later Turpin stole a valuable horse for which Tom King was arrested. Turpin tried to rescue King, but, never being a good shot, he hit and killed King instead of the constables guarding him. Turpin escaped into Yorkshire and lived under an assumed name. After hunting with friends one day, he impulsively shot his landlord’s cock (a bird, Janet!!). He was hauled before the magistrate and ultimately discovered to be Dick Turpin. 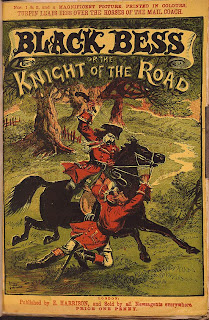 So how did this brutal and not-always-bright highwayman become such a legend? Why, he was popularized in fiction! The highwayman Dick Turpin was a secondary character in Harrison Ainsworth’s novel Rookwood, which became a best seller. Ainsworth’s description of Turpin’s famous ride from Westminster to York captured the public’s imagination and the legend was secured.

Except that legendary ride was made by a 17th century highwayman, Nick Nevins….

The romanticism of Turpin continues with a movie made in 1925, starring Tom Mix, and a television series in the late 1970’s.

Can you think of any other legends created in fiction? What’s your favorite highwayman character in a romance?

Remember to visit my blog on Wednesday and Friday when I’ll be All Undone and giving prizes.

I love heroes in disguise! It’s so fun unwrapping the mystery with the heroine.

Robin Hood! A hero with the good of the people at heart can’t be beat, IMHO. 🙂

Didn’t Mary Jo Putney pen a highwayman back in the day? I’ll search my shelves!

Don’t forget the “highwayladies”! I recently watched a great movie about a very scandalous lady:

“The Wicked Lady” is a 1945 film starring Margaret Lockwood in the title role as a nobleman’s wife who secretly becomes a highwayman for the excitement. The story was based on the novel “The Life and Death of the Wicked Lady Skelton” by Magdalen King-Hall, which in turn, was based upon the (disputed) events surrounding the life of Lady Katherine Ferrers, the wife of the major landowner in Markyate on the main London – Birmingham road. A chance remark about the notorious highwayman Captain Jerry Jackson gives Barbara (The Wicked Lady) an idea. Masquerading as Jackson, Barbara holds up the coach of her own sister-in-law, Henrettia, and takes her brooch (as well as the rest of Henrietta’s jewelry). Intoxicated by the experience, she keeps on waylaying coaches, until one night, she and the real Captain Jackson (James Mason) target the same one. After they relieve the passengers of their valuables and ride away, Jackson is amused to find his competitor is a beautiful woman. They become lovers and partners in crime.” (Wikipedia)

The Wicked Lady was more ruthless and notorious than any of the highwaymen, including her lover, Captain Jack. They eventually betrayed each other, and they both came to a very bad end.

Not exactly a highwayman, but the Scarlet Pimpernel as a hero in disguise will always be a fave. Love Percy!

While researching Calamity Jane, I discovered that like Dick Turpin her legend rests on a series of books about Deadwood Dick that were published in the 1870’s. Poor Calamity, while being in Deadwood with Wild Bill, was never his lover, never bore his child, never really did much of anything except drink a great deal.

Legends created in fiction that I would think fall into this category would include Zorro and the Count of Monte Cristo (favorites). Zorro was an outlaw, and though the Count wasn’t an outlaw, the “real” man was.

Then there’s Barbara Cartland’s The Lady and the Highwayman, later turned into a movie was the first thing that came to mind.

Isn’t it interesting how few heroic highwaymen there were in real life? But they got/gave great press.

My favorite is Macheath in The Beggar’s Opera (Mac the Knife in Brecht’s Threepenny Opera).

I have to go with Janet’s choice! Macheath is a great character.

A great book on the subject is Stand and Deliver – A History of Highway Robbery by David Brandon.

One of the things that appeared to be common with these highwaymen legends was their panache at the time of their death. Like Jack Rann who went to the scaffold in a brand new pea green suit.

Yipes. I’ve been busy all day. I’m not usually this late in commenting.

Katherine…Robin Hood! Of course! And anything by Mary Jo Putney is good enough for me!

Virginia C, I must see if Netflix has that movie!!

Deb! Of course, The Scarlet Pimpernel fits, doesn’t he?

Elizabeth, Calamity Jane is a great example! I didn’t know all that about her.

Janet, I guess robbing people of their possessions isn’t exactly something heroic people really did.

I forgot to say that THIS blog was picked up as a “Best Regency Blog”–I’m not sure why…..
http://www.regencyengland.com/best-regency-blogs/highwaymen

Off the top of my head, ZORRO is the only one I can think of. Zorrow might have been loosely based on the outlaw Joaquin Murrietawho was a brutal person and certainly no hero.