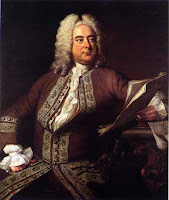 Today, April 13, marks the anniversary of the debut of one of the best-known works in classical music, Handel’s Messiah! It was composed in London during the summer of 1741 in just 24 (!!!) days and was premiered in Dublin April 13, 1742. It was afterward revised numerous times by Handel (often to the specifics required by the performing orchestras) and reached its now most-familiar form at a performance to benefit the Foundling Hospital in 1754. It’s still often performed at Christmas and Easter, with the world record for an unbroken sequence of performances held by the Royal Melbourne Philharmonic, which has performed it annually since 1853!

Messiah is divided into 3 parts which interpret the life of Christ, the birth, miracles, crucifixion, resurrection and ascension, concluding with Christ’s final victory over death and sin. It was premiered as part of a series of charity concerts in Neal’s Music Hall in Fishamble Street near Dublin’s Temple Bar. Right up to the very date of the premiere the performance was plagued by technical difficulties, and the Dean of St. Patrick’s Cathedral, Jonathan Swift (under whose aegis the premiere was to be held) cancelled it for a time. He demanded that the revenue from the concert be promised to local asylums for the mentally ill. The performance was finally held on April 13, and was completely sold out–the managers had to ask ladies not to wear their largest hoops for fear there would be no room for everyone in the hall! Handel led the performance from the harpsichord while his frequent collaborator Matthew Dubourg conducted the orchestra from the podium. 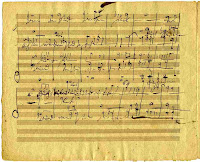 The soprano aria I know that my Redeemer liveth is often heard today at funerals, and over Handel’s grave in Westminster Abbey his statue holds a score of this very aria. The most popular section heard today is the Hallelujah chorus, which concludes the second of the three parts. In some performances it’s standard for the audience to rise for this piece, which is said to come from its first London performance on March 23, 1743. King George II rose, and so of course the rest of the audience had to follow! Another tale (which may or may not be true) says an assistant found Handel in tears as he was working on the composition and asked him what was wrong. Handel held up the score to this chorus and said “I thought I saw the face of God!”

What are some of your favorite pieces of music from this period (Handel or otherwise!)? Have you heard any memorable performances of Messiah? And do you think it is really possible to write such a thing in 24 days??? (I wish I could write a book in 24 days!)

At the Handel House in London–in a glass case, of course–is the handwritten score of Messiah. It’s fascinating to wander the rooms, trying to pinpoint exactly where the composer might have been sitting when he created the masterpiece!

I belong to a community choir that sings “The Hallelujah Chorus” every Christmas for our little town’s Christmas celebration. It’s hard to sing, but beautiful.

I grew up in a church that sang a lot of Handel, Bach, and Beethoven hymns, so I love the “traditional” church music. (Trumpets and organ included.)

I love Bach’s cello suites. There is something about the unaccompanied cello that I find transcendent, although the composer should probably get the credit rather than the instrument.

Even better, I discovered the cello suites through a romance novel, “The Rakehell’s Reform” by Elisabeth Fairchild. The book is part of a series about the Ramsey siblings, and each book opens with the same scene: Jack walking out of a gaming hell having just lost the family fortune. He is a gifted cellist and seeks solace in music. I liked the book, liked (and miss) the author, and am eternally grateful for the Bach.

Sorry I’m late jumping on here today! Just got back home and am frantically trying to catch up on email and do laundry. 🙂

Susan, I love that book (and every Fairchild I ever read!). I have several of her titles on my keeper shelf…

Altho I’m into Baroque performance/original instruments I really do love Messiah with a thumping big choir. I think I’ve blogged here about attending a performance in York Minster that was so cold we kept on our gloves and hats!

I was going to talk about my favorite recording but it seems to have gone for a walk downstairs to visit my husband so I’m not sure when I’ll see it again.

And, here’s a trade secret. I find choral music excellent for writing love scenes. Not sure why or even that I want to know.

If you’re in the Washington DC area, check this out, coming up in a couple of weeks: two settings of the Magnificat, one by big daddy JS and the other by wildchild CPE Bach:
http://www.bachconsort.org (sorry, I don’t do html after 8 pm).

Janet, that concert looks fabulous. I wish DC was closer so I could be there! (and I wish we had more early music performances here…)

I like big, soaring opera choruses and duets for writing love scenes myself. Wonder what that means? 🙂

SO excited to read a post that is right up my alley!

I’ve never been to the Handel House in London, but it is on my “bucket” list.

I’ve sung The Messiah with every kind of ensemble imaginable. I sang the solos in four different Messiah’s over one Christmas week when the DH and I were in medschool/gradschool. The Messiah has been very good to me financially, but the biggest attraction for me is that it truly is a fabulous piece to sing, whether in the chorus or doing the solos.

Rejoice greatly, O daughter of Zion was one of my signature pieces when I was still singing professionally.

Janet, I am pea green with envy over the Bach concert!

It is odd you should say how big choruses are great writing music. Many of the most intense scenes in my manuscript The Raven’s Heart were written to Mozart’s Requiem, particularly the Lacrimosa.

My church has a custom of closing the Easter service by inviting anyone from the congregation who wants to join with the choir for the Hallelujah Chorus. We have up to 60 people packed into our little choir loft, some of them professional singers who are too busy being professional to sing with the choir every week, and it sounds better than you’d imagine unrehearsed Handel possibly could.

It’s my favorite musical experience of the year. I love singing Handel in general–the glorious precision of it, the way the parts weave together, the way his alto lines move. All too often in choral music or hymns, the alto part spends so much time parked on a D or E that I feel like a human bagpipe drone, but never with Handel.

(This is Susan Wilbanks, by the way, posting under my brand new pen name.)

I would love to see Handel House in London!
I haven’t been listening to music while writing lately and I think I should get back to it. I bought a bunch of cd’s when in England and used to listen to those. Must find them again.

“(This is Susan Wilbanks, by the way, posting under my brand new pen name.)”

I’ve found I really have to listen to music while writing, or the quiet distracts me! It can’t be anything too new-to-me or I stop to listen, but the right sort of mood music for whatever scene I’m working on at the moment is a huge help.

Sorry I missed the anniversary, but I’m chiming in anyway. I love just about all of the Messiah–but as a singer I particularly adore “He Shall Feed His Flock,” which just rolls off the vocal cords. I sang it last Labor Day (after all the second verse is “Come unto him, all ye who labor”!) and loved it as always. And, no, I can’t imagine writing anything that fast…… I’m guessing he didn’t sleep much.

I love the Messiah. Sometimes choirs put on a ‘scratch’ Messiah when anyone can come alomng and sing. Not great music, maybe, but great fun.